the title speaks for itself I guess.

I have ripped mch layer of only one sacd to try roons mch capabilities. They are detected as duplicates. ı can see the 5.0 and stereo indications when I select the albums however it would be best if they were detected as 1 album and maybe a button like the other versions button to select between 2.0 and 5.0.

You can remove them from being duplicates.

Yes I have combined them ( group alternate versions)

other versions button is there for all albums since all albums have a tidal version… so it is hard to know which ones have mch editions.

AI guess I don’t really understand your issue. Right now is what you want. Make the 2.0 or multi your primary (whichever is more important to you) and then go into other versions, if you feel like listening to the other. Alternatively you can remove them from being group and label the versions Stereo Version and Multi Ch version.

I’m confused, you now have what you said you wanted but you still don’t like it?

Just suppose that i have an album X. When i am on album view i see that album X has other versions. In my case all other versions are Tidal versions because i don’t have any duplicates. So as a result nearly all of my albums have “other versions” due to Tidal.
Now suppose that i have nearly 500 SACD rips and nearly all of them are hybrid multichannel. When i rip the multichannel versions out of hundreds of albums and add them to my roon library i can not know precisely which ones also have mch versions.

So in my experience, i would prefer multichannel and stereo buttons separately instead of clicking other versions button and see if that particular album has a mch version.

ın short what i meant was … it would be nice two have two more buttons next to other versions such as multichannel and stereo.
Other versions more feels like a tidal version, mp3 version…etc however i think the stereo and mch mixes of the same album on the same sacd don’t fall into other versions category

That’s where you’re getting confused. the other version button is NOT just for tidal. Personally I don’t have Tidal, but when I have a album where I have a deluxe version, 24bit, cd or a remastered. It’s easy to set my favourite to the default version and if I want to another version, just press the other versions button… that button is exactly what you are asking for.

I think the easiest way for you to handle this is to go into Album Browser and Focus > Format > then select 5.1 or whatever multichannel selections are there. Once you Focused on these, save as a Bookmark.

However, for this to work, if you’ve Group Alternate Versions, you have to go to Settings > General and Show Hidden Albums.

Also, One thing I did was the select the multichannel album and Edit > Edit Fields tab and then scroll to Version. There I made it Multichannel. You then have to make sure Settings > General > Show Album Version on Browser is selected.

See Pink Floyd, Dark Side of the Moon in the screenshot. 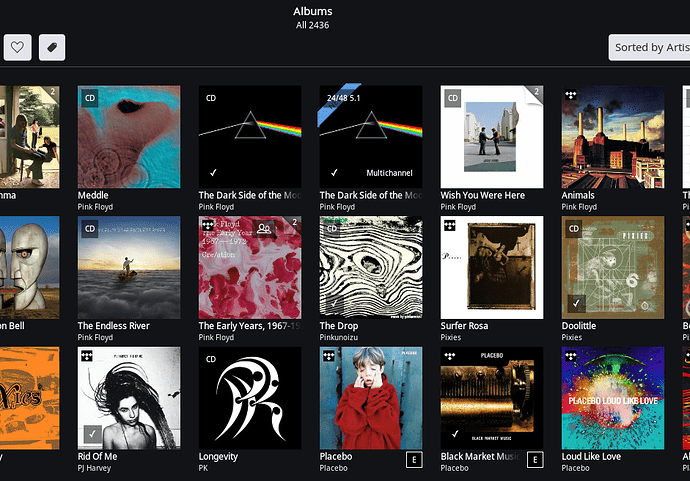