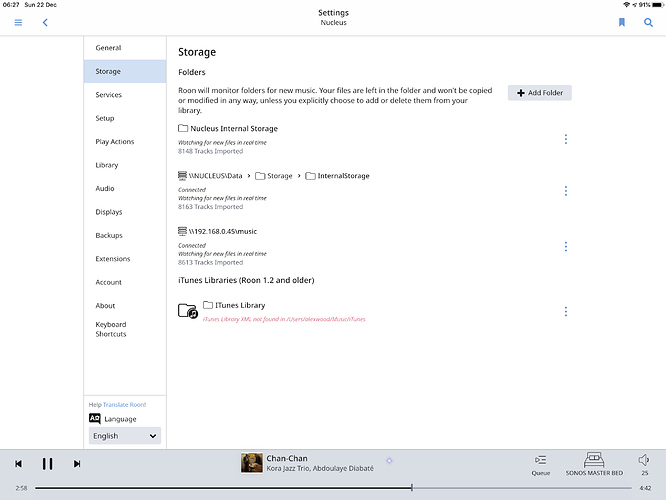 As can be seen from the image, I have two storage areas for my library, firstly the Innuos Zen mk3, secondly internally to my Nucleus, but the image shows three. Why is it showing three and why do they all have different numbers of files?

I’m bemused by this.

It looks like the first two locations are redundant. They both point to the internal storage of your Nucleus. Because that location is the default ‘music folder’, you don’t need to list it separately.

If you go to Settings>Library>Skipped files is there anything there? It is weird the first two listings should be identical. Do you have some type of USB drive attached?

No skipped files, checked all of that and no usb drive connected.
Just the innuos and the Nucleus drive, the reason was to have back up of each other, but I have different number of tracks.
Confused of Hampshire

You have Internal Storage added twice. Once the standard way and once over the network. My advice is to do the following:

Dylan,
Thank you, followed your directions and removed the network version for nucleus, but still have differing number of files.
Still bemused by that

Are there any albums that should be showing up in Roon that aren’t?