Seriously, I think streaming services only exist to drive us to buying CDs again. The amount of music that SHOULD be on these paid-for services that isn’t, is maddening. One would expect Supertramp to be well represented on Tidal given their place in the 1970’s rock pantheon. You get 11 albums, 3 of which are different versions of the same record, two greatest hits collections, and no version of the album they are most known for, “Breakfast in America”. Guardians of the Galaxy 2 soundtrack on Apple Music is only a playlist…that and a bunch of similar nonsense cost Apple a HomePod return.

Bottom line is that the only way to really have access to the music you want is to buy it yourself.

I think it is frustrating if you cant find a particular album but I think Tidal streaming is simply the best value product I have ever subscribed to. For £20 per month I get FLAC quality music fed to my system . If someone had told me 20 years ago that this kind of service would be available at this type of cost I would not have believed them.
I sense your frustration but for me Tidal has revolutionised the way I listen to music.

Bottom line is that the only way to really have access to the music you want is to buy it yourself.

Completely agree. Not to mention, if you want a certain mastering. There are those who think the 2007 Genesis remasters completely suck. Yet, those are the only ones available on streaming services. That means there will be generations of listeners who have no idea there are better sounding versions out there.

Licensing issues are annoying. Over here, Supertramp looks pretty much complete though, for the albums that matter: 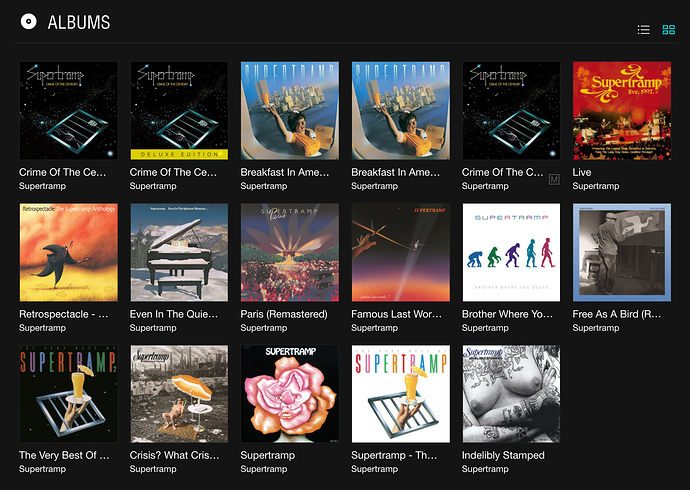 I sense your frustration but for me Tidal has revolutionised the way I listen to music.

In one sense, yes. In another, it is completely spoon feeding you only the current and not necessarily best version.

Additionally, lets say, they replace the current version of an album you love on Tidal with the even hotter mastered version, which you now think sounds bad. You can’t go back, the version you loved would be forever lost to you.

You hit a nerve there with the Genesis remixes. After hearing the 2007 versions I scrambled all over to at least get the prior “Definitive Edition Remasters” they did in the 90s which I think are about the best available. The original CD releases were frankly pretty poor and those “Definitive” ones cleaned up the sound without compressing them too much. I have WAY too many versions of the Genesis catalog. And I still find myself looking for the original vinyls when I hit the shops.

Although…you can never have TOO much Genesis.

True to an extent, at least for me. Mainly though it is my music discovery tool. If I find things that I adore, I order the disc. I will never, ever trust the labels with the music I love.

Yes I do understand that. I used to think i would never stream music and that I had to own certain albums, but in the last 18 months that has all changed. I used to use Tidal to discover and then buy too. Now I rarely buy. I am clocking on a bit now but I still love all the new music coming out and Fridays are now so bloody exciting since I got Tidal with the new releases.

Then 2 weeks ago I discovered Roon, and my life is complete

This is the nonsense that drives me batty. 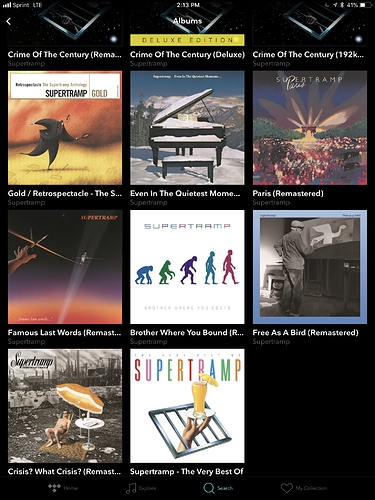 The Apple one is the more egregious of the two for me as I pay for both Apple Music AND iTunes Match and that album is uploaded as a purchase. When my HomePod would say “playing Guardians…” and then play naught but silence, its return was guaranteed. To have to give up a $349 piece of hardware for something that stupid, especially from Apple, near broke my heart. (Not to mention that the touch controls didn’t seem to want to play with Roon at all despite being AirPlay)

I’m simplifying now, turning away from MQA and all that…adding a nice Schiit Bifrost Multibit connected to a Raspberry Pi and Asgard 2, and listening mostly to the joy stored away on my NAS. With the GOOD Genesis mixes. Lol. 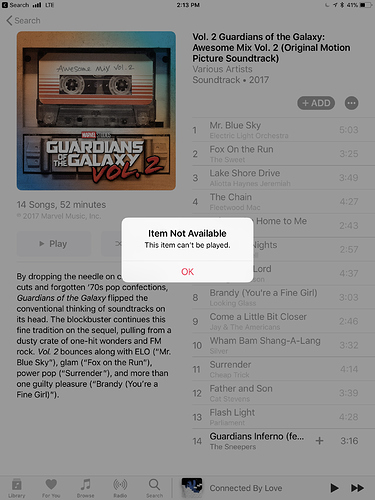 You can easily have too much Genesis.

There’s a guardians of the galaxy mix on Tidal btw.

No. Having too much Genesis and/or Phil Collins is an indisputable impossibility.

. Suggestions to the contrary are fake news.

And, yes, I know I’m being goofy arguing between playlist vs album, but I’ve always been picky about album art and metadata, back from the days of labeling the songs on all of my minidiscs.

And thanks for listening. Most people I talk to about music smile, nod and back away.

no version of the album they are most known for, “Breakfast in America”

How ironic for me. Today for the first time in I don’t know how long when I opened up Roon I just selected “Shuffle”. 2nd song was from Breakfast In America. It was Casual Conversations. While playing I jump over to Tidal to see if there was a more recent or a MQA version. I too was taken aback that Breakfast in America was not there.

So I selected “The Very Best Of” and off I went. Then like I often do I came back to this forum while giving it a listen and then right away I came across this thread…

I must have entirely to much time on my hand…

Best to you, my friend. Trick is FANTASTIC. And I am a fan of all the rest and also firmly believe that The Kinks are the most under-appreciated rock band of all time