Network Details (Including networking gear model/manufacturer and if on WiFi/Ethernet)
Both devices are cabled, so no wifi is involved.

Description Of Issue
Streaming to my DS stops after 10 minutes.
Same with Tidal and files on Mac mini local hard drive.

Anyone experiencing something similar with the new M1 Mac?

Is your Core from the Mac mini going into a sleep mode? Double check that…

Tidal might be logging itself out. I have this issue with Qobuz (a lot)

Powersave is off, and screensaver changed to 15 minutes. And I have the same issue with local content and tidal.

New info (and Robert have a point)

I tried working on the Mac mini while playing music from my local library. This time it did not stop after 10 minutes, but after about 13 minutes I got a Tidal not logged in message and music stopped. The Roon GUI looked like it reset at the same time.

All powersaving is turned off (sorry for Norwegian language) 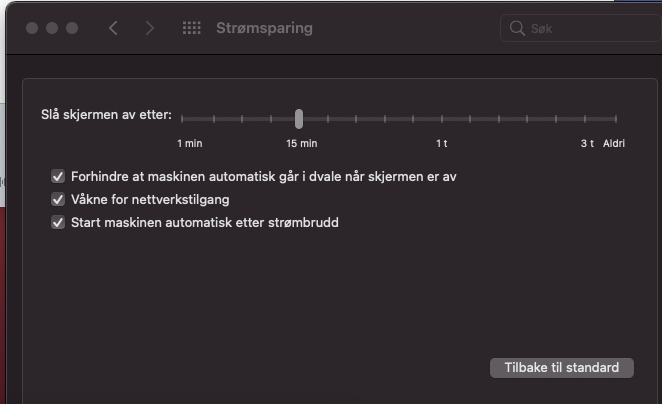 I tried to log out both Tidal and Qobuz. After new login it was more stable for a short time then it is just as bad or worse (some drops after less than three minutes).
But I think this is on the right track debugging because when I open the app I get the qobuz error message. Even while I was writing this post I saw the Roon Core/App got a zobuz error message, got blank screen and got back to the previous view again. Sometimes I get Tidal errors also so both streaming logins have problems.

Network Details (Including networking gear model/manufacturer and if on WiFi/Ethernet)
Both devices are cabled, so no wifi is involved.

Description Of Issue
Streaming to my DS stops after 10 minutes.
Same with Tidal and files on Mac mini local hard drive.

Anyone experiencing something similar with the new M1 Mac?

Hello @Per-Oyvind_Odegard, I wanted to clarify that your mac is connected via Ethernet to the router? Also, have you tried changing to Google or Cloudflare DNS? Lastly, do you experience this when playing streamed content to system output? Is it any endpoint?

Mac is connected to the router via a zyxel ethernet switch. Other services I’m running works fine (IPTV, Youtube++)
I will try changing DNS, just got a message from macOS that Roon have used to much memory also, seems like a memory leak.

No change with Google DNS.
I also tried disabling IPv6 with no effect.
Streaming stops both while streaming to output on the core (Audioquest Cobalt) and when streaming via ethernet to PSA DS JR.
Only thing is that the drops are a bit more random now. Gui says lost connection to tidal or qobuz
I suspect something happen after the app contacts Roon servers.

I have made a couple of Wireshark traces that I can upload if you are interested.

Hello @Per-Oyvind_Odegard, could you please reproduce the issue one more time and reply here with a timestamp (in your local timezone) so I can enable diagnostics for your account? I’d like to present this info to our QA team for further input.

In addition to that, can you also send me some screenshots of the resource monitor when this issue occurs? I’d like to see cpu and gpu usage as well, thanks!

Screenshots attached with filename according to each description I tried to do multiple screenshots to show change in CPU/GPU load. 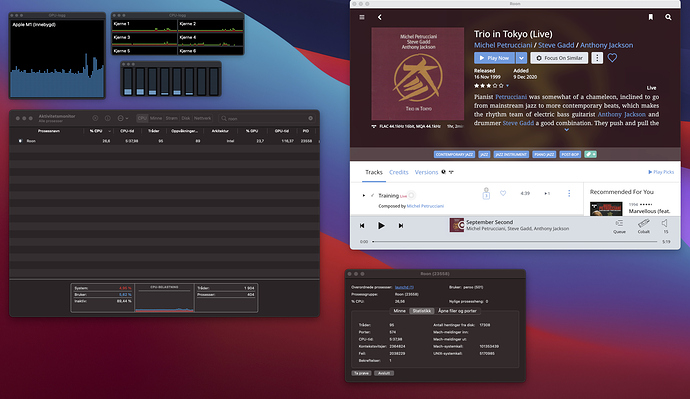 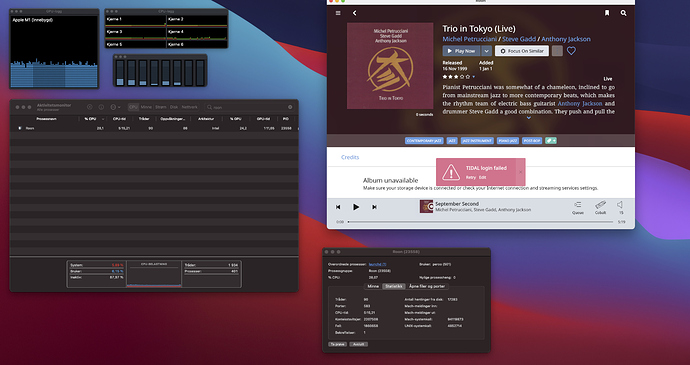 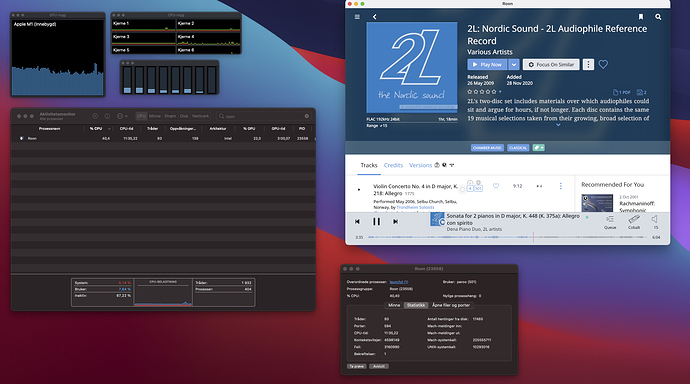 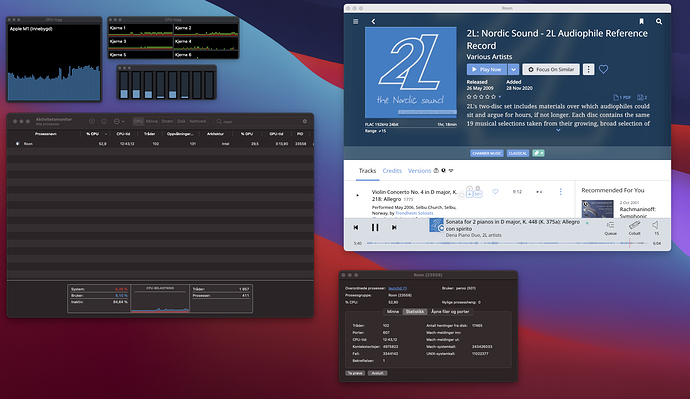 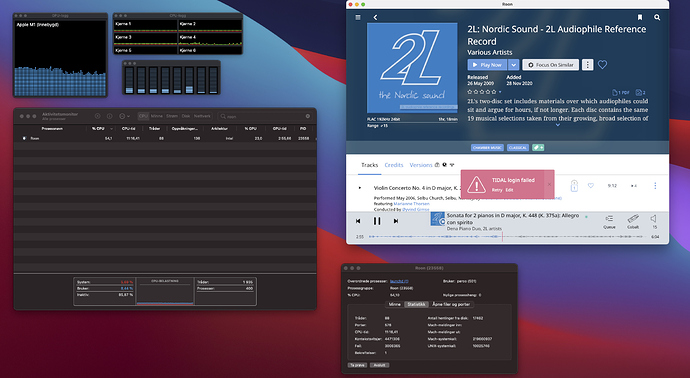 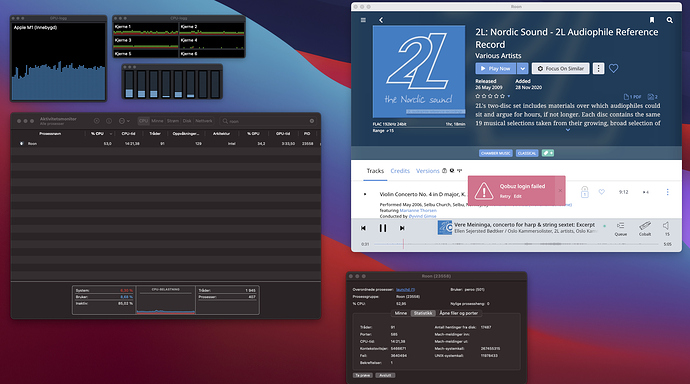 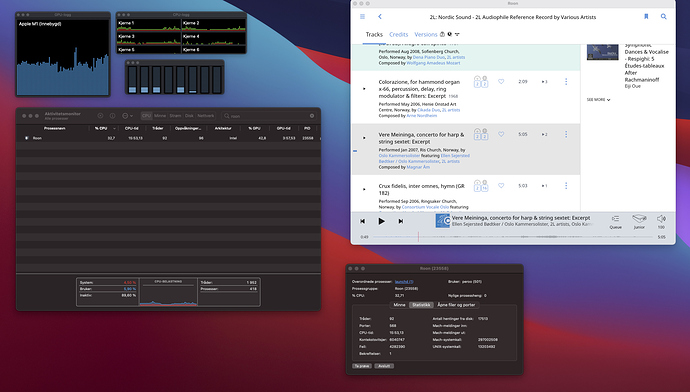 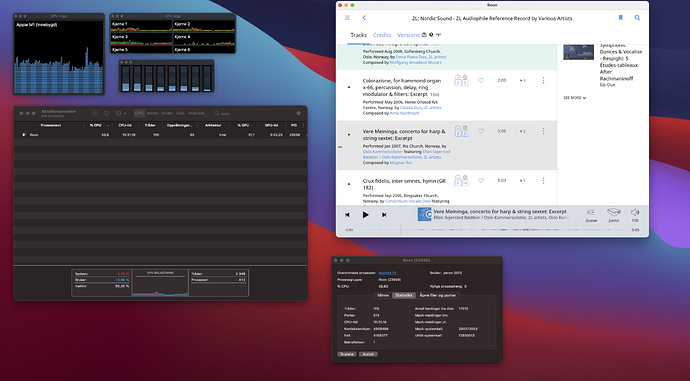 I also tried changing from zyxel to google nest router. Same problem with both so that was not route cause.

I think I have found the problem. I continued debugging network since I thought the tests you asked me to do pointed at that.

It turns out one of my Zyxel switches caused the problem. It seems to perodic drop all connections for a short period. I replaced it with a Cisco and I have not managed to reproduce the problem after that.

Looking through the wireshark trace from a couple days ago knowing what I looked for I found a 12 second stop in network traffic that probably caused the crash.

I guess your buffer/timeout are shorter than 12 seconds ?
I had a few crashes this morning before I changed the switch so you should have some debug info.