After a few tracks playing consistently on my STi7 (with HQPe 4.9.0 enabled and upsampling with intermediate filters to DSD512), playback suddenly stops (no crackles, stutters or signs of CPU stress) and it’s very difficult to recover the system.
At first, I hit Play and the playback chain light appears showing a correct config, but the timeline indicator freezes (but can be moved to any point in the track and just freezes there instead).
Then, after rebooting the microrendu and then the STi7 (or vice versa), a further attempt at playback results in the message “Playback failed because $ couldn’t connect to HQPlayer”. So, a look at HQPlayer Config to ‘re-Apply’ is attempted only for the same failure message to appear.
Ultimately, I have found that a hard reboot of the STi7 and/or the microrendu can eventually result in a need to log back into HQPlayer Config such that two options become available under ‘Current’ instead of one. This signals the point that I can recover playback by making an output device selection under ‘Current’ before returning to Roon to hit Play again with success.
But playback only lasts a few tracks before the whole saga returns.
Both Core and Remote are 1.6 (build 416), the network is stable confirmed by the fact that internet radio on my Naim Uniti is rock steady (it uses the same switch as the STi7) and all connections have been confirmed to be solid.
What can cause this frustrating instability and has anyone else encountered similar behaviour and fixed the issue? Thanks.

STi7 (SW 2.7, HQPe 4.9.0) fed by HD Plex LPSU (Netgear GS105 switch)
Direct link from STi7 to microrendu v1.4 (SW 2.7)
USPCB connection from microrendu (LPS-1 powered) to modded Singxer SU-1 (LPS-1 powered).
I2s connection from SU-1 to Holo Audio Spring Level 1 DAC.
Network involves a TP-Link 100CM FMC at the router end and the same at the other (receive) end of 8 metres of SC-SC cable. The FMCs are powered by ifi Audio iPSUs at 9V. The receive end FMC then connects to the Netgear switch via a short run of UTP cable.

As a temporary test, can you take the FMC’s out of the chain completely and also use just a single ethernet port on the STi7 (instead of the ‘direct’ connection to microRendu) ? i.e. connect STi7 and Rendu to an unmanaged switch.

Hi Sean,
I cannot use anything other than the optical network as I don’t have 8 metres of UTP or STP available. However, the network is solid as the Naim Uniti is fed by it also (wired, not WiFi) and works reliably. I will try the ‘non-bridged’ approach and report back. Thanks.

Nope. Reverting to both the microrendu and STi7 using switch inputs doesn’t have any effect, sadly. It’s got to be something to do with the STi7 or it’s software.

It’s got to be something to do with the STi7 or it’s software.

This can be tested by taking the Rendu out of the chain (temporarily). Swap the Rendu for the STi7 ie, connect USB DAC direct to STi7 with USB cable.

In HQPe select ALSA backend audio instead of Network backend.

I cannot use anything other than the optical network as I don’t have 8 metres of UTP or STP available. However, the network is solid as the Naim Uniti is fed by it also (wired, not WiFi) and works reliably.

Another thing is the Naim wouldn’t be supporting the sample rates your Rendu is supporting with HQPe up-sampling… if you are still having issues I’d recommend getting a 10m UTP ethernet cable on Monday, to take the FMC’s out of the loop.

Another test with the FMC’s in the loop, when you switch the Rendu to ‘Roon Ready’ output mode and don’t do any up-sampling or DSP (i.e. just play PCM44.1kHz bit perfectly) does it work ok?

A complete system depower/repower has again got music playing - let’s see how many tracks I can chalk off before silence returns!

No problem. If issues come up again, there’s still a few things you can try, as above…

Can you also show a screenshot of your Roon signal path?

And your HQPe config page to show all settings?

I have a pretty good idea of what the STi7 can and can’t handle (personal experience), so I might be able to see something.

I don’t seem to be able to get the microrendu recognised as a zone when I select RoonReady as Active in the AppSwitcher. The zones I see are always the two Chromecasts, HQPlayer and an iPad! What have I forgotten to do??

I don’t seem to be able to get the microrendu recognised as a zone when I select RoonReady as Active in the AppSwitcher. 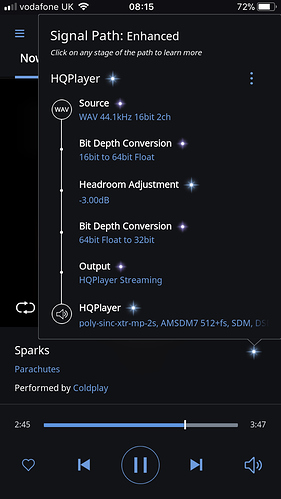 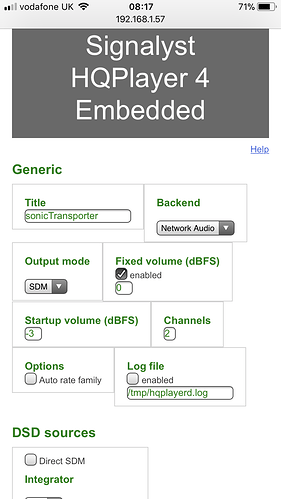 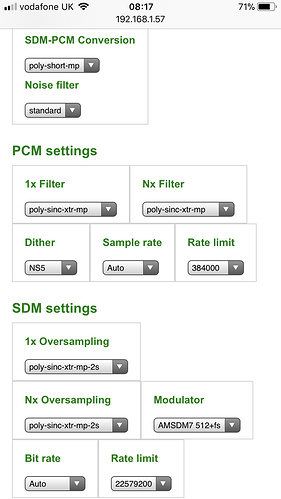 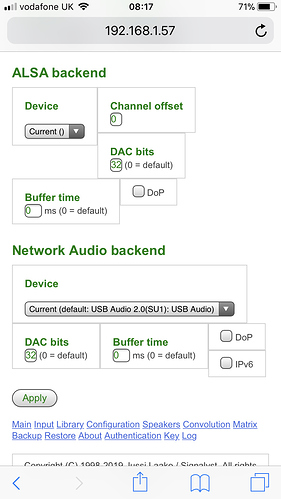 Sounds like a plan. Tick ‘auto family rate’ too in the HQPe config page…

Apply this -3dB headroom in HQPe and disable it in Roon - there’s no need to double up.

Still playing away happily…no crashes since this morning’s depower/repower. Strange that the same age-old ‘fix’ for all things electrical didn’t work yesterday evening though

Good news. If it plays up, at least you have a few things you can still try.

Yeah, I briefly paused playback to apply the settings tweaks you recommended. Hoping not to have to revert to Roon Ready mode if I can avoid it (having shelled out on HQPe!). Cheers.

First ‘crash’ since this morning whereby Roon was seemingly playing the track with the position marker moving left to right, but with no sound produced. Rebooted the microrendu but still got no sound, so AppSwitched (and switched Roon zone) to Roon Ready and music began to play. Then retried HQPe in Roon zone (microrendu AppSwitched to HQPlayer NAA), and all was well again. Maybe I have a faulty microrendu or LPS-1?!

I’m holding out for a pre-owned UltraRendu as I suspect a few will be on the used market soon following uptake of the OpticalRendu, but I wasn’t going to consider it just yet!

Maybe I have a faulty microrendu or LPS-1?!

And it’s not clear if you tried pure ‘Roon Ready’ mode on the Rendu, taking HQPe (and high sample rates…) out of the loop. That’s something to try.

As mentioned, there’s still a few things you can try before hitting the panic button…

Thanks Sean. Does the STi7 have two active USB sockets? I ask this as I connect my music library via an external USB3.0 SSD caddy and not via a networked NAS. So I’d need a second USB connection to try a direct USB feed to the DAC. I recall Andrew Gillis saying only one socket was enabled?
The successful Roon Ready connection did include DSP for upsampling to DSD512.