Last Friday I was playing a hi-rez track and suddenly only white noise came out of my speakers. I was startled and immediately stopped Roon and the noise stopped.

Today this happened again. I was playing a hi rez track and suddenly I just heard white noise and no music. I stopped Roon and restarted it and it’s been playing fine ever since.

I am running Roon Server 1.2 build 142 via a SonicTransporter from Small Green Computer.

Any ideas what could be causing this?

What kind of DAC are you using ?
What settings are you using in HQP ?
Are you upsampling to DSD ? If so does your DAC use DoP or direct DSD ?

I’m using an LH Labs Pulse Xfi DAC ∞ 2.0
The settings in HQP I’m using are below. 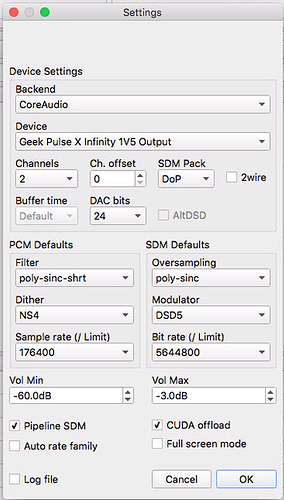 The strange thing is that I have never had this happen before. I’ve had my system setup like this for at least a week and have been playing music daily, just about constantly and this has never happened until Friday night. Really strange.

Thanks Gary,
What computer is HQP running on and how is it connected to the SonicTransporter and DAC ?

First thing I’d suggest is unchecking “CUDA offload” in HQP. That is used where you have a CUDA capable NVidia graphics card, which seems unlikely with the Mac Mini. Let me know if that’s not the case.

White noise static when upsampling DSD over DoP can occur when the end device (your DAC) treats the DoP as PCM. I get it sometimes when using the exact clock on my Vega.

When there are new problems and the user hasn’t changed anything then the usual suspects are:

If it happens again after unchecking CUDA, power-cycling, upgrading the microRendu and setting fixed IP addresses then we will drop flags for @mike and @vova to investigate further. Sorry that it’s a bit of a shotgun of suggestions, but there are multiple sufficient causes for this kind of problem.

Edit: some other suggestions, try HQP on “auto” for bit depth instead of 24 bits. What settings do you have for DSD playback in HQP ? It might be useful to specify “auto” there also.

You are correct, my Mac Mini does not have CUDA capabilities, so I unchecked that.

I will go through the steps you outlined and report back.

The settings I have for DSD playback in HQP are:

Is there any settings there that you recommend changing?

Thanks again. I’ll report back after going through the list of suggestions you gave.

Last Friday I was playing a hi-rez track and suddenly only white noise came out of my speakers. I was startled and immediately stopped Roon and the noise stopped.

Same thing has happened to me streaming to Devialet Air. I restart Roon and the white noise is gone.

That looks like the same DSD settings I’m using. It is for DSD files rather than upsampling but I will check when I get home.

@Gary_Gil - White noise when using Devialet AIR is a well known problem with AIR that many have experienced regardless of whether they’re using Roon or HQP. In my experience it is a bit more stable when AIR is running on a dedicated PC with RoonBridge… i.e. a lightly loaded PC to minimize potential conflict. But even setup that way, I’ve had the same white noise problem occur - just less frequently.

Finally gave up on AIR completely and got a Sonore uRendu. Now that is a match made in heaven - particularly with Roon and HQP.

I understand that the white noise problem is pervasive on the Devialet forums but found it curious that it happens on a non Devialet environment.

I have hardly a problem with Roon and Devialet Air, even being running on a non dedicated PC, but eventually would like to entertain the idea of a renderer so maybe I will run Roon on one of those SonicTransporter boxes. But I am sitting on the fence because I have a Bryston BDP-1 player which might be Roon ready in the future.

The white noise problem has happened maybe three times only.

I think the infrequent occurrance of the AIR problems are what drove me a bit nuts - mostly because I thought there was something wrong with my network/setup so I kept trying different things. A day or two would pass and I’d think “Got it!”, only for it to then return. Be that as it may, when AIR worked, it sounds very good.

Hopefully Devialet will address the AIR issues with AIR 3. And I understand your hesitation with the Bryston. It will be great when (if?) they integrate RoonRAAT.

I did the following:

I haven’t heard the white noise issue, but I am noticing that I’m getting some drop-outs that I didn’t hear before.

By the way, there was an OS X update that I installed, so that might have something to do with it.

There is a firmware update for the LH Labs DAC that I’m waiting to get, but I don’t think it will support native DSD on OS X (from what I’ve heard). So I will try the firmware update and if I’m still getting drop outs, I will create another support thread for it, since the original problem this thread was created for seems to be gone.

Thanks again for your help on this.

Feel free to come back to this thread or create another as you prefer.