Superfluous genres in Classical Music – how to edit?

In a hybrid library such as mine I find roon is tagging some of the most famous Classical artists so broadly as to be almost meaningless: 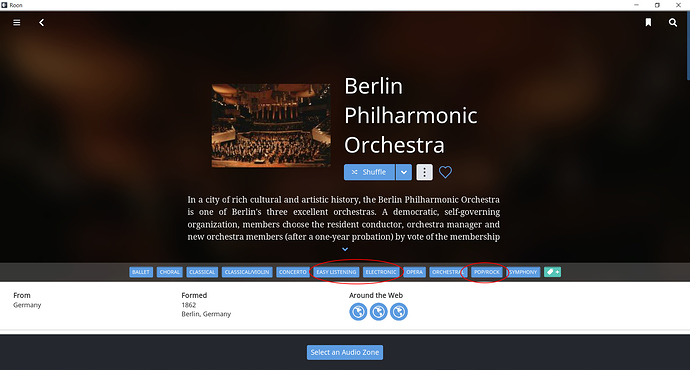 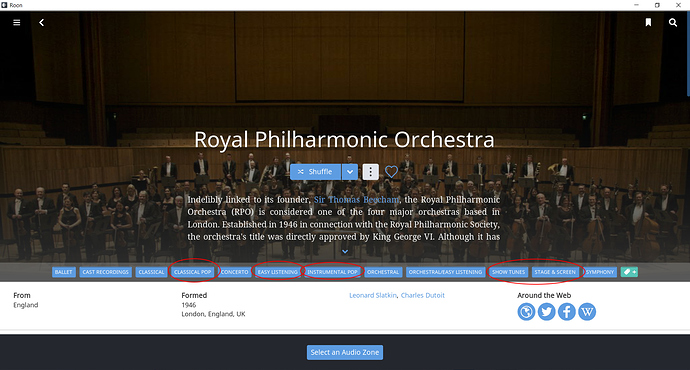 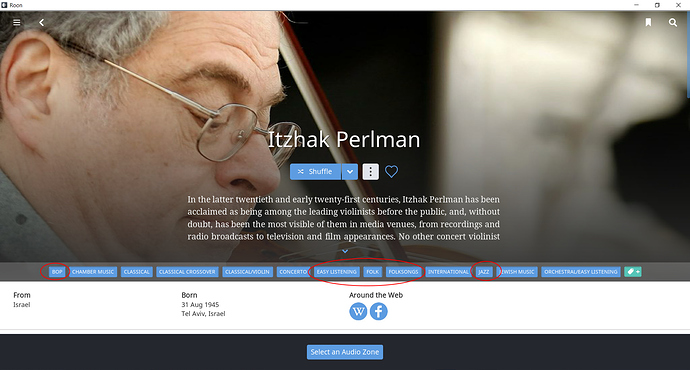 I’ve switched off Roon’s genres, and switched on the “use genres extracted from file tags” (in the library import settings) for this very reason. It seems to be better focused this way, since I’m more in control of what genres I want to have applied (using a tag editor when required).

The blue tags CAN be edited away. Go to Edit Album/Genres and uncheck the offending ones.

This begs the question of why those tags are there in the first place, but that’s another discussion.

I can understand why @tripleCrotchet wants to get rid of the tags he highlighted in his screenshots, and I sometimes edit/untick certain genre tags, too. However, none of the above tags are really “wrong”. Perlman, for example, HAS played folk and jazz music. And the Berlin Philharmonic Orchestra HAS accompanied electronic music, too…

I once flew over Berlin…

Yes, this is all true, yet the effect of having all these tags can be to diffuse the Radio feature to the extent of coming up with some rather jarring choices, which is what Tony was getting at…?

Almost. These are “artist” level genres not “album” level genres. So in principle you can edit away the unwanted ones using the artist editor screen instead of the album screen. The problem is there is, to me anyway, some unexpected behavior.

Just like with an album there are roon genres and file genres. If you untick a roon genre that you don’t want it disappears until the next time you add an album by the same artist with the same genres and then roon reinstates it not just as a file genre but also as a roon genre. So that raises two more issues.

a) Why is roon re-instating the genre you don’t want?
b) Did the genre really go away at all? Is roon still using it for example as part of its radio algorithm?

Yes, that is exactly my point. There are a number of issues:

Wow! Thanks for the correction. I didn’t get the Artist part.

Gee, a well-articulated “manual” of sorts might shed some light on your questions. It might eliminate possible hours of experimentation and head-scratching. But manuals are only for unintuitive software, so that’s out.