The great score to Superman: The Movie is a mess on Roon. All it seems to find is artwork for the 1998 Varese Sarabande re-recording, not even the original album art from original 1978 soundtrack recording released to CD in 1990. It also can’t properly identify the 2000 re-release of the expanded score or the 2019 re-issue from La-La Land Records I was a producer on. How can this all be cleared up? 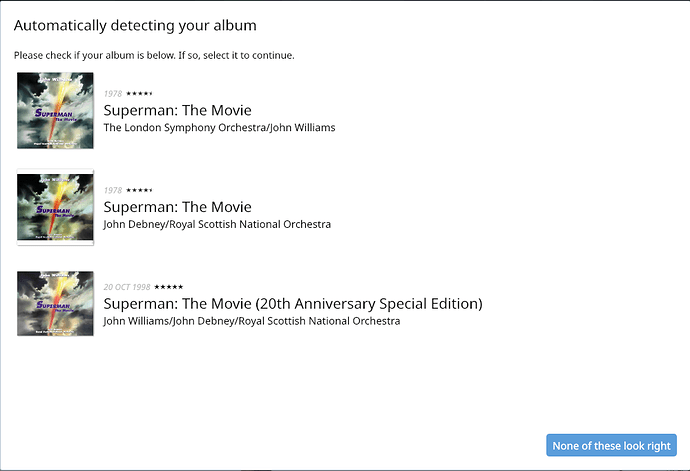 Thanks. If there are any questions about this, feel free to ask. There are quite a few Superman albums.

There are still problems with this. The original 1978 album description is for the 2000 expanded re-issue, even calling it a “re-issue”. The track list is now found and correct.

The 1998 re-recording is found but again, features the album description for the 2000 Rhino release. This should not be on the original 1978 album or this recording.

The 2000 Rhino release is correct, but when it finds it, it has an issue with disc 1, track 11. The correct running time is 4:47 while the ID said it was 2:33. That’s the running time from the original 1978 album. The album description is correct, repeating the same info that’s incorrectly on the 1978 and 1998 releases.