Folks, I have discovered a MAJOR WEAK FLAW with Roon! I have 2TB of music with as MUCH AS POSSIBLE High Res Downloads, GOLD disk BUT HAVE HiRes GAPS!

Example: Qobuz that I subscribe to has a few High Res Alan Parsons albums (I Robot and Eye In The Sky) THAT I WANT TO PLAY! But, because I have EVERY Alan Parsons ALBUM in my Roon Library the Qobuz Hi Res albums are not AVAILABLE TO SELECT!!!
CORRECTION — The Qobuz Main Albums (10) ARE SHOWN but not the HiRes marked version to Select for the playing! How do I know I am playing a Qobuz Hi-Res version???

THIS A MAJOR PROBLEM since frankly many of the stream only files are better than my local library versions stored on my 2TB drive. The difference can be HUGE with Imaging and overall details To Die For!!!

THIS MUST BE FIXED SOON…

You have to click on versions in Roon and choose the version you want to play. Or, if you want to add it to your Roon library, you choose the version you want and add the link to that version to your Roon library. Sometimes, an album you are looking for will not yet show up in Roon. If that happens, you can go to Tidal or Qobuz and “like it” there and then sync your Tidal or Qobuz account in Roon so it will show up. 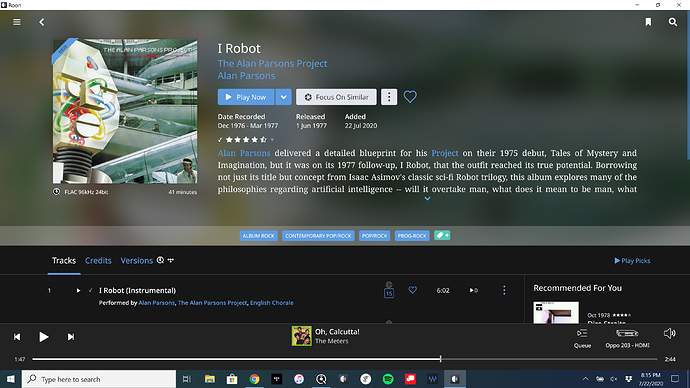 The PROBLEM IS these 2 albums aren’t shown in the Q (Qobuz icon) Main Albums (10) category where only as shown 10 albums are shown but I Robot and Eye In The Sky are not shown in the View All Main Albums and thus since I don’t see an Add to Library button to get it into my library!

With Screen Sharing into my MacMini I can feed the Qobuz stream directly into the NAD Amp and play it that way but not through Roon. I am New to Roon and still learning but I believe I am Right! Please try it for yourself.

The Resolution NEEDS to be Shown near the bottom tab where Queue/Output/Volume resides as 96KHz/24 for example to never mistake the version you are playing! Thank goodness the Qobuz icon is shown on Album/Track.

I did not have that album in my Roon library until you posted. So, I linked the 24/96 version to my Roon library and posted a screen shot for you. It shows it is a Qobuz album and the resolution is 24/96. As I said before, if it doesn’t show in Roon, go to Tidal or Qobuz and “like it” then do a sync in Roon and it will show up. That might be a “work-around” for albums that have not yet synced with Roon. I have no idea how often or when Roon syncs with Tidal and Qobuz. 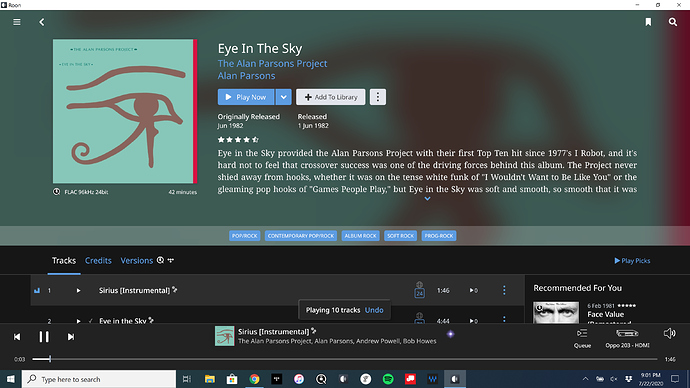 THANKS! I did in Qobuz download into an OffLine Library as a High Res as a First Step which I think should now show it.

But Roon hasn’t seen it yet for me to select.
Still saying 10 albums in the Qobuz Main Albums display BUT NOT these 2 albums.

How long do I need to wait for them to show up in the Qobuz Main Album display so I can select it there?

Sorry, still not quite there yet…

When I look for an album in Roon and it’s not there, I go to the Tidal or Qubuz app and look for it there. If I find it, I “like it” in Tidal or Qobuz. Then, I go to the Roon program and click on Settings - Services - Edit - Sync Library Now. Usually, it shows up immediately as I recall.

Good Alan Parsons HI-res disks. Check out the prices they get for them on flea-bay. I bought both those, along with Turn of A Friendly Card when they came out of DVD-HDAD. Some of the prices are ridiculous.

Is this one of those instances where you need to go to the album and “unhide” each album to reveal it? That happens to me on occasion.

Hello all, and thanks for your comments here. I wanted to drop some information about this issue.