To an extent roon already supports “partial” album artist links. For example in much large scale vocal music it is common for the credits to be “Performing Orchestra & Chorus”. Here is an example of what I mean with the “BBC National Orchestra of Wales & Chorus”: 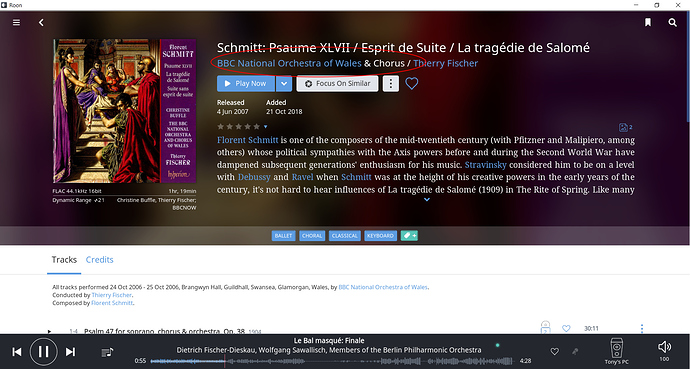 You can do this by putting “BBC National Orchestra of Wales & Chorus” in your file’s album artist tag but setting the primary artist link in roon to “BBC National Orchestra of Wales”. Not only does this make for a much less messy album page it connects orchestra and chorus to other parts of your library and in any case, in my experience, links to artists with the formulation “Performing Orchestra & Chorus” are empty with no artist art and/or bio information.

There are other very similar formulations that do not work like this, especially chamber works where members of large orchestras also do side projects supporting smaller scale works. For example “Soloists of the RIAS Chamber Choir” or “Members of the Berlin Philharmonic Orchestra”. There are always exceptions. For example, “12 Cellists of the Berlin Philharmonic” will land on a useful page. Mostly, however, they do not. 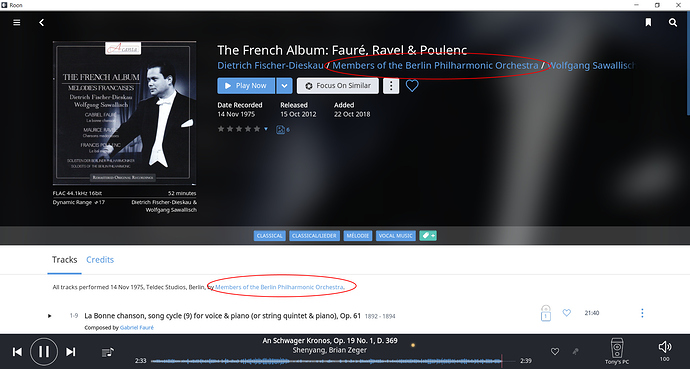 In other words it is better to land on this page: 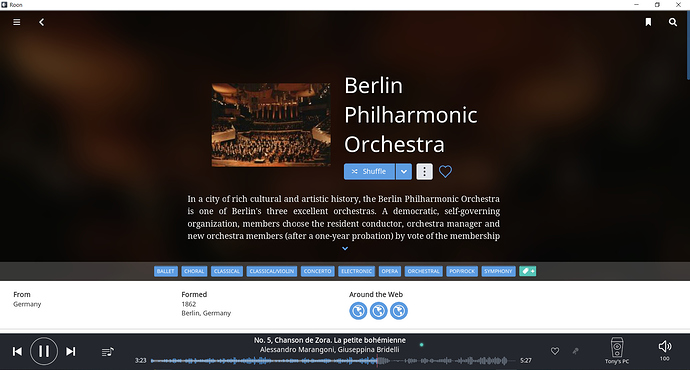 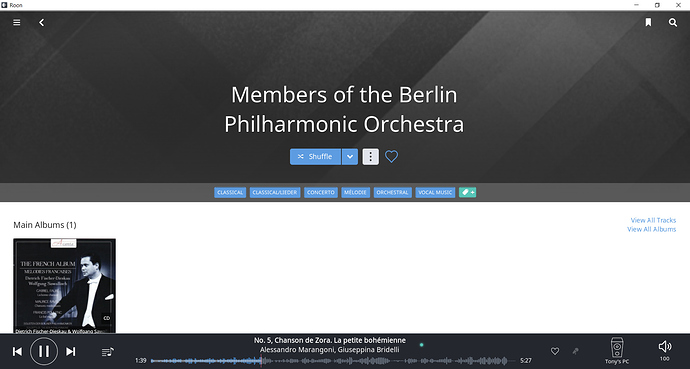 I would much rather have different subsets of ensembles linked together in general, rather than being orphaned as somehow entirely separate. It also doesn’t make any sense to me that “Members of . . .” or “Soloists of . . .” are being treated as separate ensembles with their own performing and corporeal identity. This will be rarely the case. Mostly they would just be a “floating” membership that would be different from project to project and it is just a crediting convention and convenience from the labels.

There may well be other similar formulations that others come accross in their libraraies and would like supported in a similar way.

“Orphans” as you call them, are easy to create in Roon, and often hard to detect once there. But since this suggestion involves metadata AND classical, I’d guess the odds are <1% for implementation.

Unfortnately, merging them doesn’t work for me. Especially where I am not that familiar with the music. I experimented with that in a few cases but ended up rolling it back.

In this example “Members of . . .” is an important visual clue that these are chamber works rather than oratorios which is what having the entire big guns of the Berlin Philharmonic Orchestra would otherwise say to me. But it also doesn’t work having so many dead and “orphaned” artists and links accumulating like this. As it happens in this particular case there were 11 soloists involved from the BPO. In my experience this level of detail is simply not making its way into the metadata but it is a scenario I see quite commonly.