Surface 3 vs Surface 3 Pro for ROON...utility and future proofing

Hi all, I’m looking to get a Windows based tablet for use as a Roon remote. I’m currently looking at the Surface 3 vs the Surface 3 Pro given some of the decent details on both of these units. I do have a few questions:

The current price differential is $100 between the 4GB RAM/128GB storage Surface 3 and the i3/4GB RAM/128 GB RAM Surface 3 Pro…not significant. Is this a no-brainer in terms of jumping on the more powerful unit which is currently discounted $300 online?

OK, bear in mind that I’m not associated with Roonlabs, I’m just trialling Roon, so I can’t give you any deep insights into the future of the Roon software. Having said that, I am a Surface 3 owner (have been since it was first released), and have been a tablet owner since the days of the clunky HP TX2000.

Power: The Intel Atom is these days unfairly maligned. True, when first introduced in 2012, it was pretty dreadful, but with the 3rd generation used in the Surface 3, it’s plenty good enough for handling the graphics of software such as Roon. I did find that I needed to use the 32bit version of Roon on my Surface 3, which surprised me, since I am also running the 64bit version of Roon very happily on a ThinkPad 10, which has a slower Intel Atom chip and graphics than the Surface 3. I’m also trialling Roon on a Yoga 900, which is a Core i7 Skylake-based laptop. The Atom machines are just as usable for Roon (caveat: at the moment, but I don’t expect that to change?). Tl:dr - the Surface 3 is perfectly suited to Office-type productivity applications.

Noise: I’ve always preferred fanless tablets over those with fans. That’s one of the reasons I waited for the Surface 3 over going for the Surface Pro. Fans tend to annoy me, and they have a habit of coming on at unexpected times when Windows decides it’s going to do something independently of me.

Portability: for me, the Surface 3 is a Goldilocks machine, not too big (Surface 3 Pro) and not too small (ThinkPad 8). YMMV, of course, but I’m very happy with my Surface 3.

I have a surface pro 3.
I cannot say I’ve ever had issues with the fan.
However when I have a choice I usually plump for the iPad as a remote as it’s easier in the hand.

The following give some ides of the resources roon remote uses 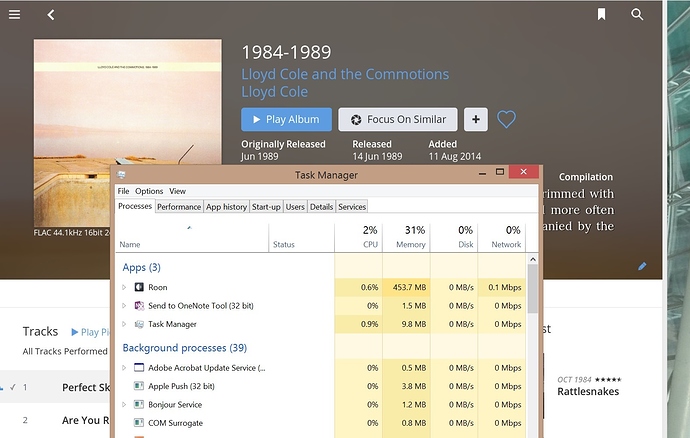 I have a Pro 3. The fan is pretty active. I am not using it as a remote but I did at first and it was entirely satisfactory.

Thanks for all the replies…much appreciated. For those of you who have experienced the fan noise: is it not overly obtrusive/noisy?