Switching daily between Roon core on work vs home computer?

Thanks for sending those screenshots over @otinkyad! I plan to discuss your findings with QA, please don’t start opening up firewalls just yet.

Hello @noris – thanks for taking this up with QA.

I have two slight updates:

First, I did try what @Rugby suggested, for a few days – leaving both cores running. It seemed to make things a little bit smoother. But I still ran into similar issues. On the work core, although it would come up with the “Unauthorize” screen, after clicking to Unauthorize the home core, the work core would sometimes still come up with the attention triangle and “metadata improver halted” message, requiring a restart to come up “clean”. And on the home core, I had some odd behavior, as shown in the screen shot below, claiming I am entitled to authorize 0 devices: 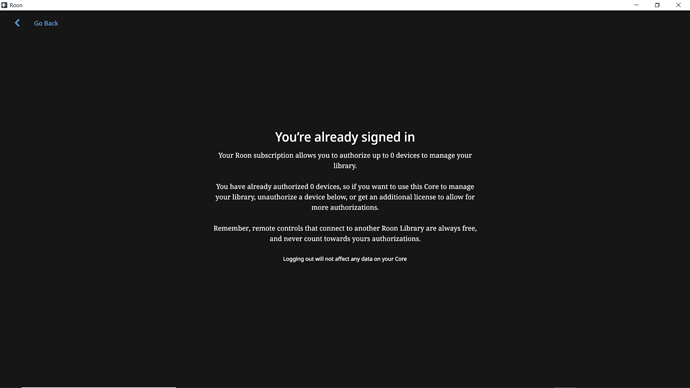 My other update is that I discontinued the practice of leaving both cores on, and reverted to shutting down the home core (and laptop) at night, and shutting down the work core when leaving work in the evening. The glitches may have gone back up a bit (same as reported in my previous post with all the screenshots), but it is not feeling overwhelmingly onerous to deal with them.

I’d certainly appreciate any insights QA has, though. Thanks again.