I would suggest Syncing the ‘Love Hearts’ of tracks in an album between all albums under the ‘versions’ tab, so when you select any of the versions of the same album (IE Local, Qobuz or Tidal) they all match with the songs you Heart, or Dislike and mark off with the cross heart.

I find it quite annoying having to manually sync these between 3 different albums all the time. 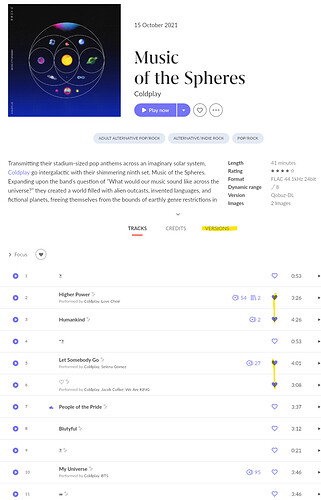 I don’t think this request would be popular since each version represents a different release, and the quality of the tracks does vary significantly between releases, rereleases, remasters etc.

Personally I would find this immensely useful.

Reminds me of this request - Solve the library/non-library conundrum and all the complexities it creates for tagging, focus, playlists

I can see the use case for choosing the ‘best quality version of a recording’. But on the whole, admittedly there are always edge cases, it feels like that is a flag that would be better set at the album/version level, leaving the track level heart/flag for ‘favourite songs’.

Would be interesting to know how many people currently use it one way or the other, but I expect there is no reliably way to find that out.

I guess it’s a matter of perspective. Are you favouring the song, or a particular release or performance? I think it is the latter, since we are talking about a library. If the release was tangible, say a book, would you favour the paperback over hardback or a first edition?

If the release was tangible, say a book, would you favour the paperback over hardback or a first edition?

I agree…I think it very much depends on how you currently use hearts.

I (and I assume @Snook) use them to flag our favourite songs, not releases/versions (at least not at a track level). But I also agree, there is nothing to say they should be used that way.

Personally, using the book analogy I’d like to flag a particular edition as my favourite [1] at the level of the edition (equivalent to a version of a complete album). But if I set a bookmark or highlighted a ‘favourite paragraph’ (equivalent to a track) then I’d like that to apply to all editions of the book if possible.

[1] I’d argue it’s more useful to use tags to do this, that way you can label each version descriptively ie. ‘favourite edition’, ‘first edition’, ‘proof copy’ at the overall version level and if I am not mistaken you can actually do this currently. Although I expect others would also want those tags copied across versions, so that might not be the simple solution it might first seem and we’d be back to the same problem.

I did wonder about that, i certainly don’t want random versions added to my library

Can’t speak for the OP (@Snook) but for me personally, yes that would be useful functionality,

I often ‘heart’ my favourite songs/tracks on an album and would like to see those flagged tracks, regardless of which version of an album I am looking at. I’m possible an edge case, but I sometimes download a local copy after I have initially added an Album from Qobuz (and ‘hearted’ some tracks) and would like those ‘hearts’ synced across both versions.

I believe the same issue occurs if you migrate from Tidal to Qobuz using a 3rd party service like Soundiiz ie. the albums get migrated, but the hearts don’t get copied across.

Rather than arguing over how ‘hearts’ should be used, it might be worth looking at how both use cases could be supported more effectively in future. I guess the OP (and my use-case) is we’d like a way of flagging our favourite songs regardless of which version of an album they appear on.

These are the exact same issues I have.

The feature under versions to “make primary version” is your way of prioritizing the album version you want. But the hearts should really sync between all versions of the same album

I listen to albums. I never click on the track list menu on roon. To me music is made as albums not tracks. I’ll use the heart block item to kill a track or two on an album I love but don’t like 1 song for example so when I play an album it skips that track. Of course I have to always manually sync the hearts or dislikes between tidal qobuz or local because sometimes it will be a tidal radio add from the car then added as qobuz for higher quality then obtained locally if it’s a keeper.

It seems when you ask for features here there is always pushback “your using it wrong” etc I see a lot. Obviously that’s silly.

At the end of the day, you can have features that are turn on/off in the settings so it can please everyone both ways

The feature under versions to “make primary version” is your way of prioritizing the album version you want. But the hearts should really sync between all versions of the same album

I’d actually forgotten for a second you could already make a version ‘primary’ that way.

It seems when you ask for features here there is always pushback “your using it wrong” etc I see a lot. Obviously that’s silly.

I think you are reading the answers wrong!

I am convinced they are all primarily trying to see what your request is for, what it’s purpose is and if possibly there are already functions that would solve the issues.

It’s often about the “onboarding phase” with Roon, getting to know it’s functions and “quirks”.

And i for one don’t see the need for your request as i am not using Roon the way you do. That does not make either of us more “right” than the other though!

I am just making a comment generally from what I see on the forums, my own feature requests and others.

I like ROON which is why I keep using it, i see potential, but there just seems to be a number of very obvious features to ‘me’ that are missing.

Coming from streaming land, apps like spotify, qobuz, tidal do a lot of these things by default. Don’t get me started on lack of inbuilt/native streaming ability outside the house