Hi, I have multiple Roon “endpoints” on my network. Is there a way to get them to play the same music as the same time without having to set them up individually? Sort of like Linking Zones in Sonos? Thanks, Hammer.

Yes, there is. Click on any of the endpoints and select Group, then choose which you want grouped. As far as I know they need to be of the same type to be able to be grouped.

Do you mean in the Zones screen? I can’t seem to find it. Thanks!

You’ll get to the Zones screen by clicking on your current endpoint in the black bar at the bottom of your screen:

The Zones popup will appear: 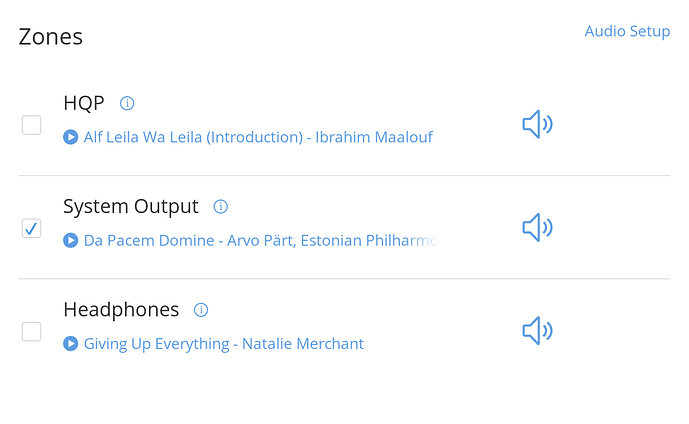 Zones that can be grouped together will have a blue ‘Group’ button next to them.

Rene has set out the current position as I understand it. Synchronisation of zones is a very important capability if Roon is to challenge Sonos. Of course, Sonos has proprietary hardware and a single protocol. Roon is aiming higher than that.

Synchronisation of RAAT zones (RoonReady and RoonBridge devices) has few users now, but after 1.2 and as more devices get released, it will grow. I believe it will eventually outgrow AirPlay, Squeezebox and Meridian streaming and those protocols will be regarded as legacy systems. RAAT let’s the DAC own the clock.

But having shown how to do it right, it would be interesting to hear from @brian what the prospects are for synchro across those families. If anyone can do it my money would be on him.

I think Roon are likely limiting the ability to stream simultaneously to different types of zones as a consideration to sound quality and compatibility. SONOS get away with this, by simply sending audio only as one standard (e.g. 16/44) which means that every player is on the same sample rate and bit depth.

However with roon, your main system may be playing 24/192 and an airplay speaker will only do 16/48 so this would mean re-sampling the output to be able to work, it may even mean resampling the 24/192 down to the lowest common denominator to make it work.

To point out what an issue this could be, you just need to look at the way that ITunes deals with this. I have an iTunes library on a mac mini, connected to a USB DAC at 24/96. If I play a track on the main system, and then select airplay to another zone at the same time, there is audible clicking noises on the main system as the audio is resampled to suit the needs of the second zone.

I admit its a drawback for me, but not a huge one, and to be honest, the ability to send totally different audio to different zones (something iTunes with airplay can’t do) is more appealing to me than not being able to group random zones.

if I need to play the same audio in all rooms, I’ll just add an airport express to my main system for when I need multiroom audio.

The problem with zone linking across disparate devices is one of latency.
Each type of device could have a different audio latency … so even if Roon was outputting the audio in sync then each device could be delaying the music by a different amount of time … net result lots of “echos”.

To compensate for this Roon would have to know what the latency of each device was and then delay the audio to all but the “slowest” device.

I guess it not insurmountable (but might require manual calibration) but not high up on priority list.
Maybe this will change once RoonBridge has been rolled out as this tech. affects how Roon manages endpoints.

perhaps the latency is the “clicking” im hearing on iTunes.

e.g. the mac mini with local USB is having to constantly alter its timing output, to maintain parity with airplay. In my house all airplay devices are perfectly in sync with the main system. Not so much as a spot of echo to be had, but it does seem to come at the cost of the main systems sound quality.

I assumed from the signature of the sound that it was due to on the fly resampling being done rather poorly!

in any case, its easy enough to just feed airport express into my hifi if I needed to have the same audio in all rooms.

The recently released AirFoil 5.0 has a neat system for synchronizing different outputs, so that echo is removed.

It’s basic, but works very well. Ideally, you wouldn’t have to do this manually, but it’s better than not having the option to use multiple outputs of different types. I’m not sure yet if delays vary between sessions, but they should be somewhat consistent. A 100% match is not super important in my setup, since the speakers are in different rooms. 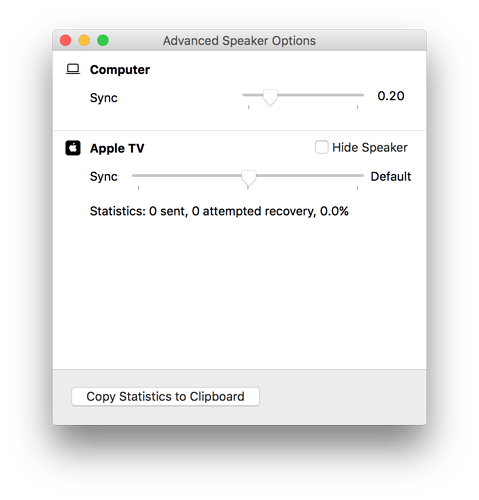 Computer’s system output is of course much quicker than AirPlay, and has to be delayed. A value around 0.20 got the computer speakers and Apple TV nicely in sync.

Odd… I my system using apple products. They were always perfectly time aligned. Main hifi, Apple TV and AirPlay speakers. I didn’t need any additional software to achieve this.

Not really. It depends on the setup. iTunes does this kind of synchronization too, because without it the computer’s own speakers would be quicker than those connected via AirPlay. It’s also dependant on what kind of equipment the AirPlay receiver is connected to—there are a lot of TVs and receivers that have varying degrees of latency.

But being able to manually sync outputs is especially useful for mixing and matching different kinds of end points. (Which is what I did above, really, with my computer and an Apple TV.)

hi guys, was wondering if there’s been any change on this topic of multiroom with zone grouping of different device types. In my case I have a microrendu (RoonReady) and a Muso QB which I suppose could only be used in Airplay mode. Would a grouping of these two devices be possible?
from what was said more than 1 year ago, I believe it isn’t but wanted to see if there were any changes there. Thanks.

Best chance would be to select the Shairport emulator app on the mR and see if you can group it with the Muso QB AirPlay Zone.

A post was split to a new topic: Zone grouped Naim Muso and QB - Only have sound from Muso