I just grabbed six compilations that I want to shuffle through while I paint a room in the house for a few hours.

Would you do that using playlists or tags? Why?

I have a bias toward tags, but it’s possible that that preference is a decade out of date, forged in the fires of image management over 56k bps modem lines.

I’m new here and still trying to figure out what works best, so you gotta start somewhere, I’d just right click on one album, then left click on each successive one, then hit bookmark and they view your bookmark and Cntl-A and play.

I started out using Tags, then started Editing albums and updating fields and am now adding bookmarks, so it’s confusing which is better, thus for quite a while I’ll be duplicating things until I find what works best.

For instance I started Tagging albums with a Compilation CD tag, then I found a field in the album metadata to identify it as a compilation, and now I’m adding bookmarks for groups of compilation albums that are related.

I also started using the FOCUS feature and you can find compilations there, either way once you locate all your albums your interested in you can just play the full list.

I know Playlists are great, but I’m more of an Album person, I want to play the full album in the original song order, thus I don’t really use playlists, but they can be great for making nice mixes. I’d rather stick with the albums and if there is a really bad song I never ever want to hear, I can double Favorite it to block it, or if it’s really bad, I can just Delete it

Here is my experience as I have many box sets and my normal go to method is to add each CD in the box set separately as a stand alone disk under my music folder and roon sees them as separate albums, and then to create a TAg for the box set to group them. Advantages you can look at a TAG by album, disadvantage when its time to play and you choose shuffle within the TAg window you do not get all the albums. I am now wondering if its a bug, as in my box set example where for example there are 5 albums when listening over a space of a few hours selections played over and over are from the same 3 albums with for example 2 ignored? Maybe its a bug I should report?

With playlists, you cannot view the playlist by album but the shuffle functionality within that play list works as expected.

Again I’m an album person, so I don’t like shuffle play, if I have a group of albums I want to play them in album song order, what I found is if you locate your albums, via Tag, bookmark or what ever, if you hit Cntl-A you can then play them non-shuffled. Or use long press and single press to select all.

Could you use nested tags?

I tend to use tags as an on-the-fly jukebox tool (like for painting today), but as a real organizational component, I feel that their main power over is that - that they can be cross-referenced.

(as in my Dylan example, BASEMENT could be applied to the 10+ volumes in the Basement Tapes series, but BOX_SET only to those with 4+ discs - then could one further use Focus to select set BASEMENT and limit to recording dates between 1975 - 1980?)

Can that field contain multiple values?

No I think it’s a single string value, I haven’t tried a semi colon delimited list but I doubt it, I’ll try when I get a minute

How do you “add Albums to” the Bookmark? I couldn’t final a way to edit the bookmark to add or remove albums from the view. So now I end up adding albums to a Tag, and then Bookmark the Tag view. This leads to clutter - a Tag and a Bookmark for each view

Your right about that, but that’s only one method of making a bookmark, so I see it at least 2 ways, you do something, like TAG an Album, and then Bookmark the result of viewing that TAG, or you use a Metadata field, that either you populate or the Roon does at import. Here’s an example of my QOBUZ bookmark that I use to display all my QOBUZ albums that I “Add to Library”. Since it’s a Roon generated field, and is created using the Inspector, I never have to update the bookmark ever again and there’s no TAG. I fact I originally made this display, then found the inspector and then deleted my Qobuz Tags and re-generated my bookmark with the Inspector. 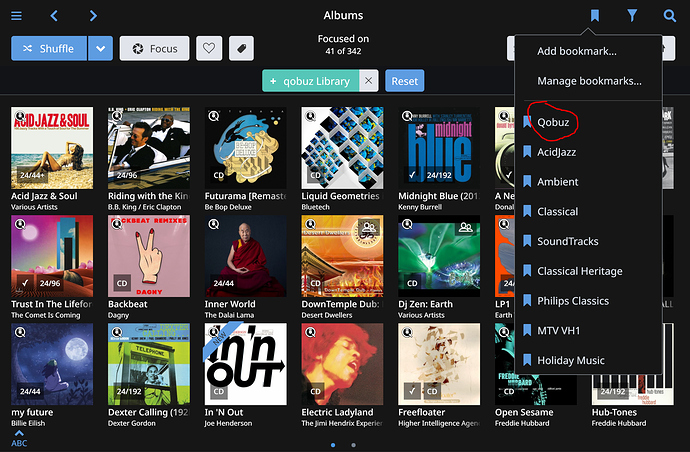 Here’s a pic of how to make that one, Click Focus, scroll right and select Format, then choose Qobuz: 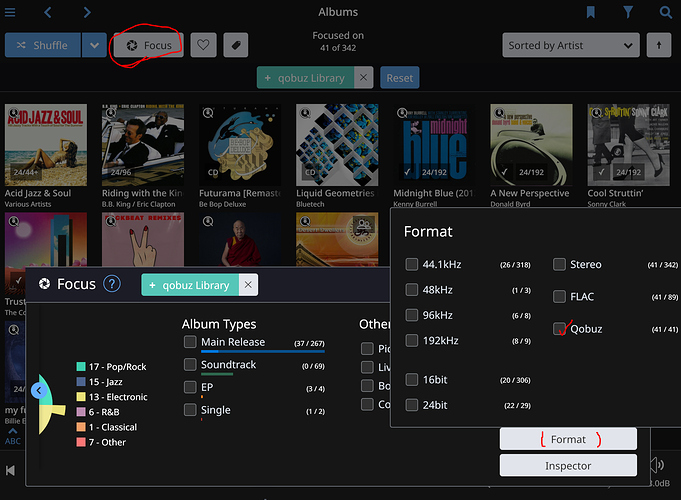 Another Trick instead of using Tags is to use a Metadata field, so again I made this Acidjazz bookmark with Tags, then changed over to the Genre fields that are automatically added by Roon at import and was able to delete my Tag generated bookmark for a Roon controlled bookmark, in some cases an Album was not identified right and then I manually EDIT the album and add Acid Jazz to the Genre and it adds it to my bookmark. 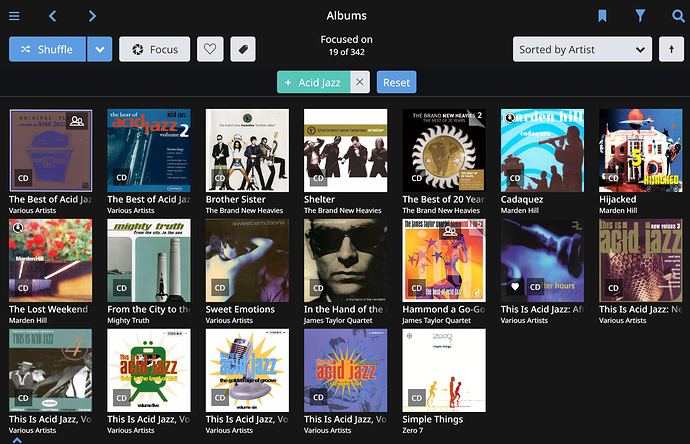 Here’s the Focus screen used to generate my Tagless Boomark, clicking on the R&B field expanded my Genres and choosing Acid jazz and saving: 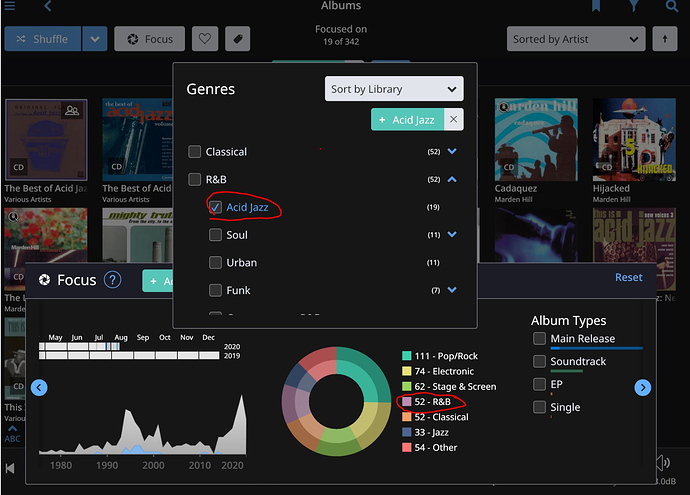 Here’s the way the album was imported, the Blue fields are auto generated at Roon Import