Take a look at my room Measurements - What's the good, the bad and the ugly

So, I’m asking the community, because I really don’t know. I’m just a music listener, with a small problem with the sound of my room. I have room treatment. But let’s look at graphs (I know some of you guys love these graphs.

I’m looking for anything that jumps out to you as being “off” or something that could be messing up the overall musical presentation. Like, what’s the good, the bad and the ugly? 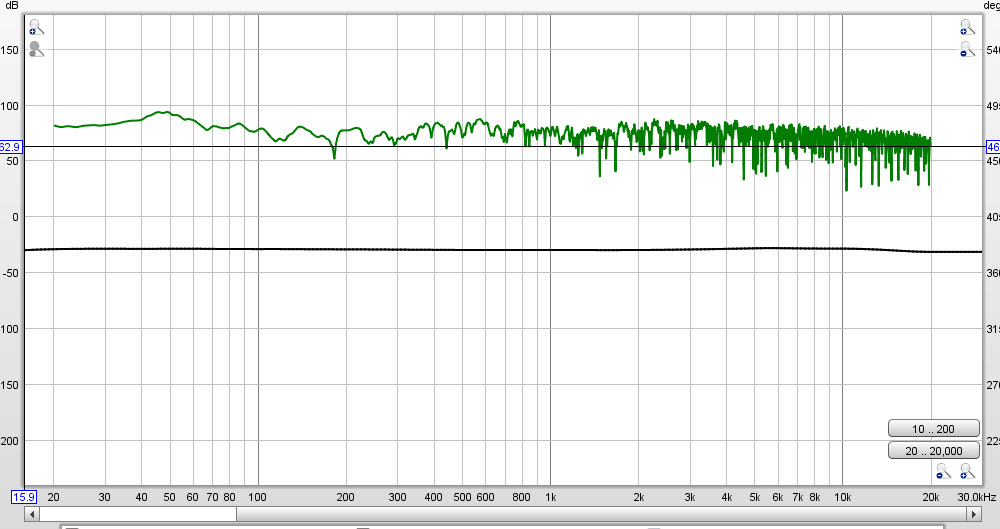 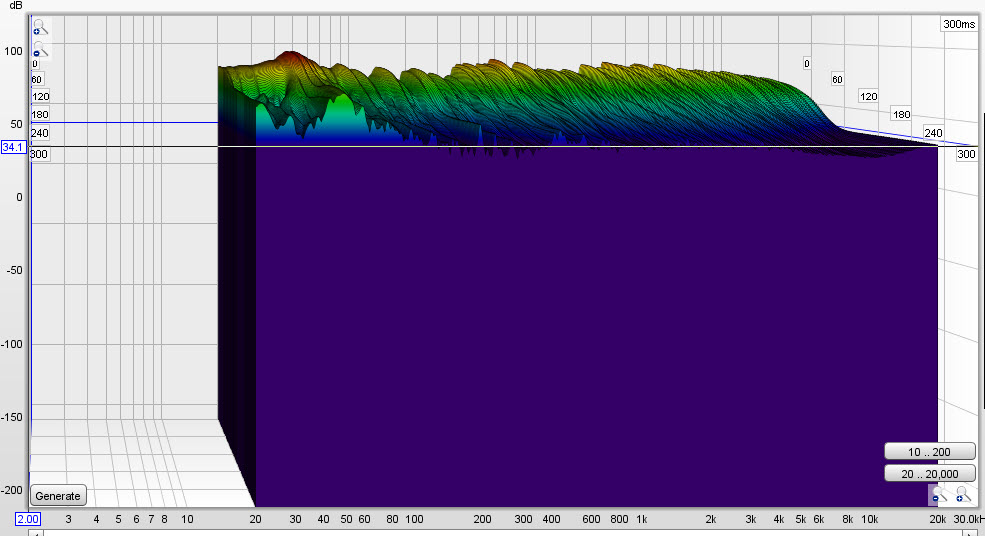 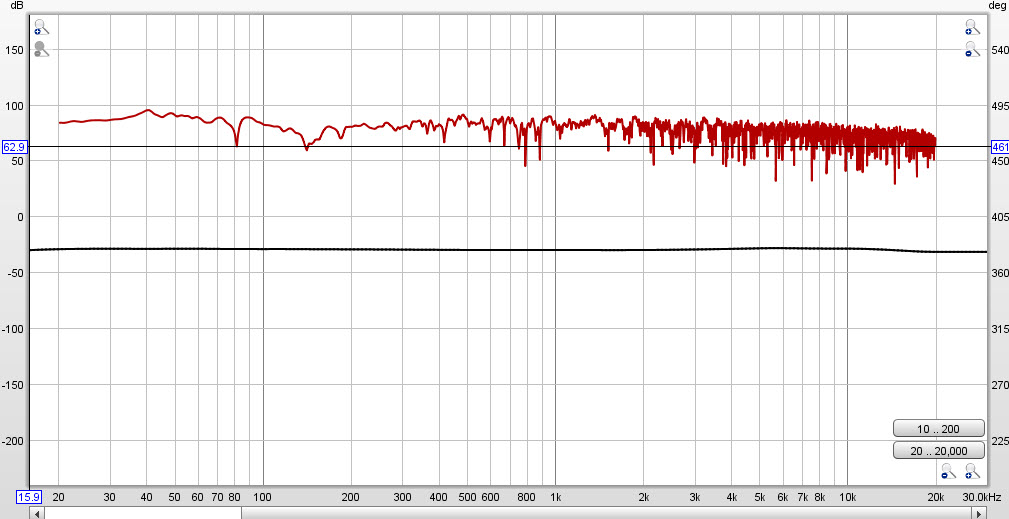 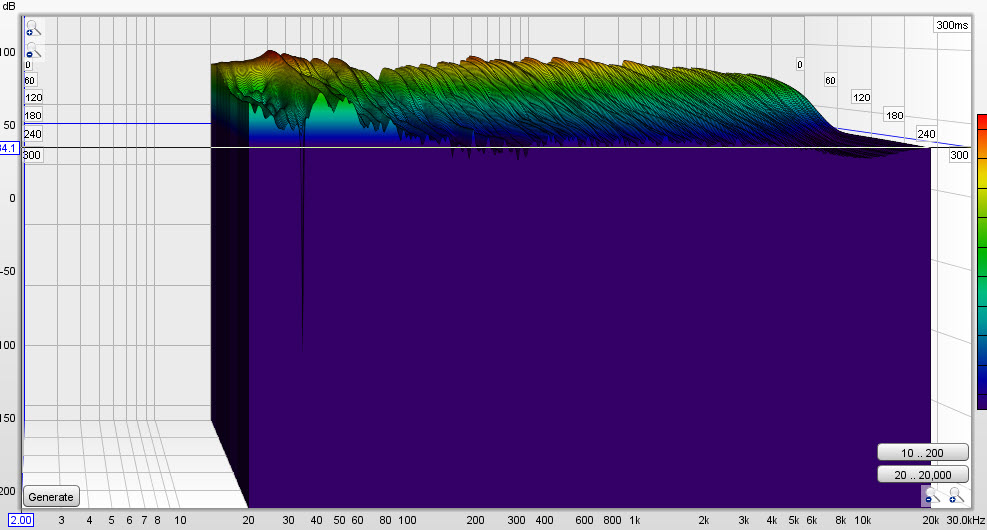 One thing that would be very helpful is if you could re-scale the vertical axis so that the majority of the info isn’t taking up only 10% of the chart space. As is, these are pretty tough to read. The waterfalls are (for me) unreadable given the visual extrapolation you have to do to guess the datapoint <> axis levels.

Re-scaling them would help, particularly for finding problems below 300hz. I’d also recommend doing the clap-test (walking around the room and clapping to ID slap echoes). It’s crude, but surprisingly effective, especially for dialog intelligibility.

There are some great tests (such as LEDR) that can help with speaker positioning. LEDR is mind-blowing for showing how badly our center channels sometimes interfere with multi-channel music imaging.

Yeah, cool, I’ll see if I can get some better shots where this can be read better. I don’t know anything about reading these graphs, which is the problem.

My system sounds extremely musical, only I feel that the bass can be firmed up a smidge, to make it a little less “round.” Otherwise, it’s pretty fine.

Tightening up the bass is a real challenge. What are your room dimensions, and how constrained are you regarding speaker and listening position setup?

As reference, my room is a bass nightmare. It’s very small, and almost square. I had to add a large number of RPG modes corners (bass absorbers) to get the bass solid. My wife has been incredibly tolerant. 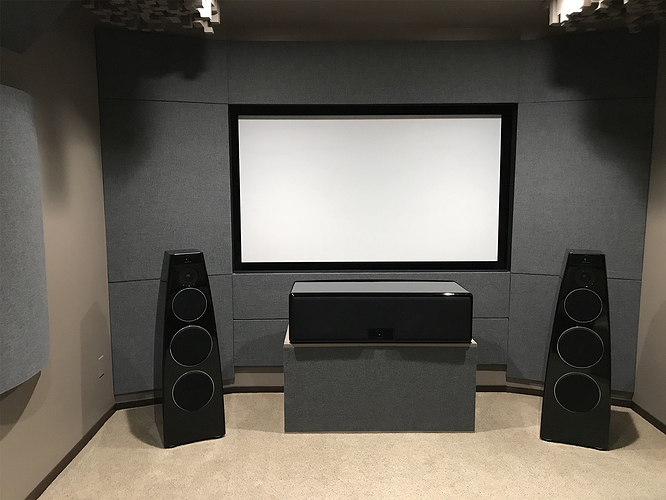 Man, I’m in a small room, too: 12x13x8 dedicated room. I, too, have traps and such. I’m seeking a way to keep everything like it is, the highs and mids, and somehow tweak that bass.

I’m not getting so far yet. Heh.

Looks pretty good I think. A little problem at 40-50 Hz, but that’s to be expected in a small room (even with lots of acoustic treatment).

You should zoom in on the graphs though, the frequency response should show from 50 to 100 dB on left, and use variable smoothing. And the waterfall should be focused on 0 - 200 Hz and 30 - 100 dB scale.

If you can tell us the dimensions of where the speakers and listening position are, we can probably take a stab at which low-end frequency peaks are most likely to bug you the most.

Sorry for the delay fellas. I was out all morning with the wife.

So, does this give a closer look? 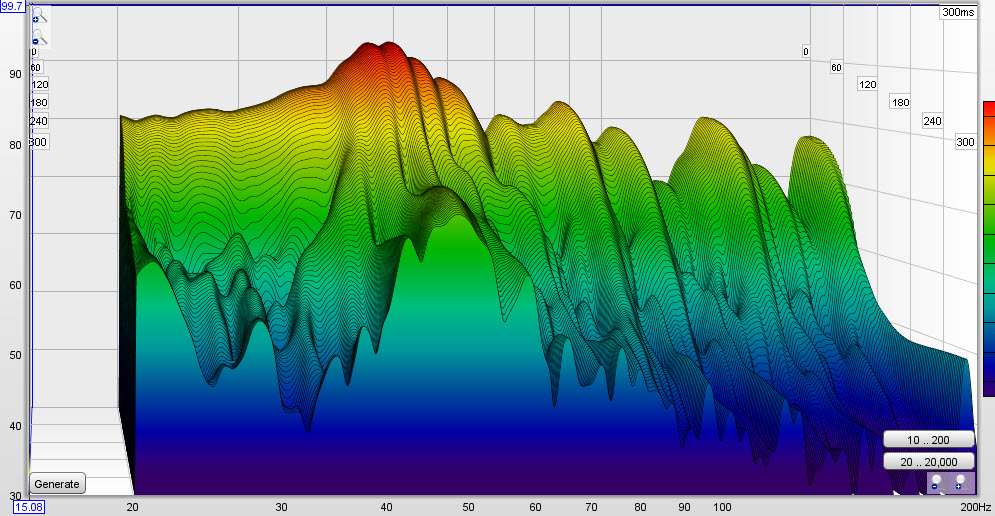 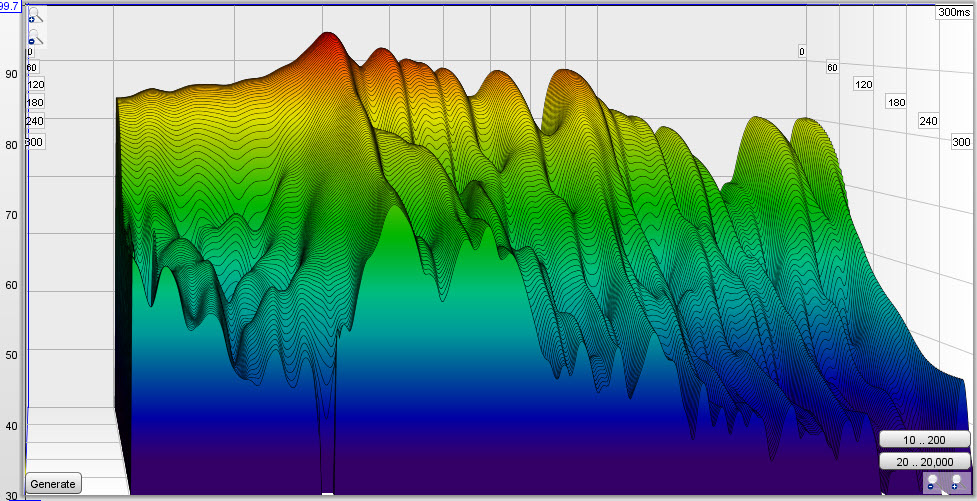 So, I borrowed that test LEDR from a friend that came on a Chesky CD sampler. Man, my imaging, up, down, side to side, and even that one that goes left-to-right, around the back of the speakers was pretty spot on. My speakers are around 4ft tall, so when he raised the shaker 4ft above his head, the sound came from about close to my ceiling. I guess I passed those parts, but failed the part where the sound comes beyond right and left, although when music was playing I could hear beyond right and left in my speakers.

Anyway, my speakers are 6.5ft apart, 21" from the front wall, and 32" from the side walls (well, my left speaker doesn’t have a side wall). I sit 8.5ft away in my listening position. So much for an equilateral triangle, but I found that an equilateral triangle in my room is not only too close, but also diffuse. Strangely enough, my head is only about 1ft from the read wall, in my listening position, right behind some monster bass traps. I’ve tried to move further out in the room, but it sounds like shit.

I hope I got what you guys are looking for. Big thanks for taking a look!

Your primary bass peak is quite a bit lower in frequency than I would have expected from your room dimensions. You mentioned that the left speaker doesn’t have a side wall, so I’m assuming your room is part of an open-plan, making the dimensions less deterministic than a closed rectangular room.

You mentioned that you had bass traps behind your listening position. What frequency are they tuned for, and how do they work?

For now, the only thing I can think of is trying to:

I can try moving the speakers out into the room some more.

My panels are 6" 244 panels from GIK, effective down to 80Hz, but they also have scatter plates in them. They work pretty well, I’d think. Then again, they had better, as I have 4 of them and each is 72" tall and 30" wide. In fact, my rear wall isn’t really square either. There are angles, but with the panels in, it’s more rounded than anything.

As an experiment, I’d try moving the bass panels to the corners where possible. It might help us out a little with the low end peak you’re seeing. That said, there are two possible downsides:

Why not simply add some digital room correction, you can even do it manually with PEQ if you want to experiment and have 100% control (thats what I do). Don’t correct the dip at 80Hz in left channel though.

Yeah, I had thought about that, but I don’t know a thing about EQing. I was always instructed that EQ was a dirty word in the audiophile world.

On the other hand, before I got my Andra IIs, I had worked with Home Audio Fidelity and convolution filters. It was good work, but nothing could cure my crummy speakers.

I could pay Thierry again, but even in his expert hands I’m afraid of messing up the highs and mids, which I really love. Those Andra IIs run full range in the mid drivers, so there’s a special kind of magic there. I think the low crossover is at 135Hz, so perhaps something can be done around that range, or a bit lower. I don’t know.

I’ll take some pics when I get a few moments. Those bass panels can’t move from where they are, as they cover windows. Moreover, the corners are not 90 degrees. I’m not sure what they are, but my guess is about 35 degrees; therefore they don’t act as normal 90 degree corners do.

So, really, my sound is pretty damn good. No nulls in my room either. I’m just trying to figure out how to get a little more tone from the bass, which means I’d have to firm that up somehow, without touching the rest of the sound that I love.

Tell Thierry what you want, he does it manually and usually leaves the higher frequencies untouched anyway. Its also cheaper when you have done it once (€39 or so I think)

Having said that, there isn’t that much to do with your frequency response, only some smaller improvements. But he also does phase/time adjustments, which might yield an improvement (it does for me, but only slightly because I sit in a perfect symmetrical setup).