Maybe this has been pointed out and discussed before but has anyone else noticed that the RopieeXL runs a lot cooler with the XL features turned off? Specifically Spotify and Airplay in my case. As much as 10C/20F cooler. I assume the regular Ropiee runs cooler as well.

I only noticed because I had two RopieeXLs running on RPI4s and I no longer needed Airplay and Spotify on the one system thanks to some changes I made. So I turned the features off. Now the RopieeXL with Airplay & Spotify turned off runs around 46C and the other with them on runs around 57C.

That’s interesting as I have never really noticed.
Does that include cooling or just bare boards in a case?

… maybe they are different versions.
The 1.1 version runs hotter than 1.2

Stefano, Mine are 1.2 boards with the updated firmware which I believe keeps them cooler

It’s not a hardware or firmware difference. They both ran at pretty much the exact same temperature for months until I turned off Spotify and Airplay on the one.

And no cooling. They’re both bare boards in (very open) cases.

I normally us Ropieee and just stick to the stock as I have no need for Airplay or Spotify.
I have several Pi’s and I think mine normally run somewhere between 46C and 51C, but they have cooling on the chips and a Flirc case which acts as a heat sink so maybe not the best comparison. 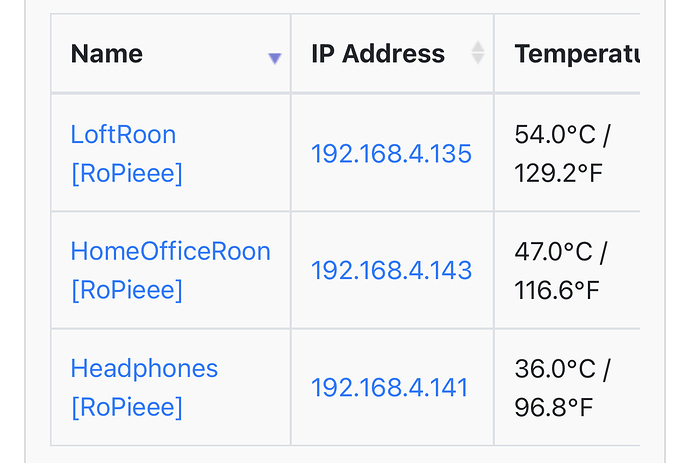 I don’t use XL but here are my 3 RoPieee devices.

Loft is in a bare case. Just bottom with open sides and top. No fan.

HomeOffice is in a plastic kit case with fan on low.

Headphone is in an aluminum passive cooling case, no fan.

I also underclocker my CPUs since they’re RPi4 devices and RoPieee doesn’t need all the power.

So I turned the features off. Now the RopieeXL with Airplay & Spotify turned off runs around 46C and the other with them on runs around 57C.

Could you turn them off individually to check the temperature? Thanks.

This is embarrassing. I never followed up to turn back on features, and see if the temperature rose, but I recently discovered what I think was the true cause of the significant temperature difference I was seeing: the Raspberry Pi that was apparently running cooler was sitting on it’s side! (one of the long sides) (and it’s an open case) I recently moved things around and have it sitting on its proper bottom and now its temperature aligns pretty closely to my other RPi.

Maybe it actually does run cooler on its side (in an open case) because the heat can escape more easily? Or it’s not really running cooler, but whatever is measuring the temperature isn’t being exposed to as much the heat.