The albums can find in Musicbrainz but can't indentified

I download the music Skrillex & Poo Bear-Would You Ever, but the version I can indentified with only some remix version, and I can’t find the original version…
But I can search the orignal version on Musicbrainz…

And both, I add the Father Ocean(Ben Bohmer Remix) on Musicbrainz but I can’t search it in indentified page, it just like I never add it to the musicbrainz. 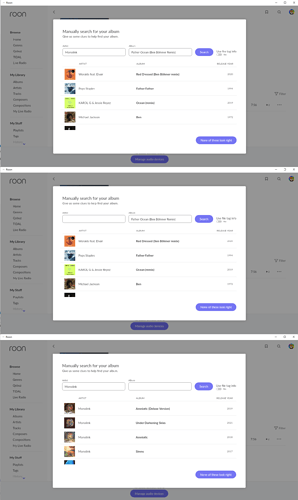 I really feel so confused about the problem I meet, is really too weird.

Anybody give some help plz!!!

The Father Ocean already can be indentified!!!

But Skrillex & Poo Bear-Would You Ever still can not…

Maybe you should read this.

Introduction This document is meant to serve as a technical reference to Roon's metadata model. Roon models your metadata in an object graph. This means that there are a set of objects--such as albums, tracks, performers, performances,...

Thank you for telling me this page but as somebody who always edit at Musicbrainz and made all of my album indentifi with the database on earth, I didn’t see anything can make me know why I can’t found this album but could found that album.

I add Luude’s Down Under with the same time, but I can just indentifi it after 24 hours. I wanna know what is the factor when their is the some data in Musicbrainz, but Roon don’t show it to me?

It’s still weird of the stuff with The Father Ocean(Ben Bohmer Remix) , I edit the data of this track in Musicbrainz from nothing to there is an album.

I already add the country’s information of Skrillex one, and try to fill up with all the information that is less before, if it work, I will know the standard of how can an album could search by Roon.

To get my downloaded (or ripped) albums showing up properly under roon, I’ve had to:

Maybe @paultaylor could comment he is a MusicBrainz guru

Don’t have a definitive answer for you but a few things to consider.

Thanks for getting in touch about this. Thanks as well to our generous community members for jumping in to help. @paultaylor’s post was particularly insightful.

The first identification option of the three offered for the Skrillex/Poo Bear single appears to be the one you need to use. What you see in Roon won’t always be a 1:1 match for what is on Musicbrainz. We realize that can be kind of a bummer - especially when you’ve tried to make edits over there to facilitate a closer match.

As @Dave_Barker added, your best bet (if you want it be an exact match for your file tags) would be to prefer file for this one.

Also please keep in mind that metadata support issues don’t have the same urgency as issue reports that are preventing a customer from using Roon entirely. With that, a support response may not appear immediately on metadata quirks. We do care about the quality of the metadata and have every intention of getting to you - but answering folks whose issues are keeping them from using Roon is our first priority.

We appreciate your patience and understanding.