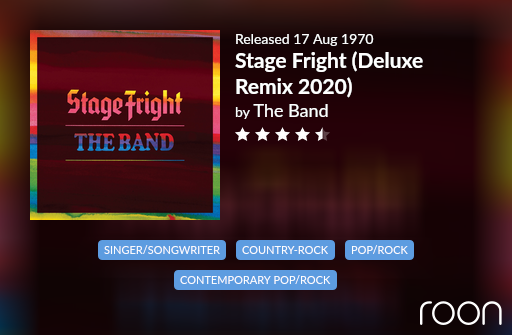 (How the release appears on Tidal)

The new reissue of The Band’s Stage Fright contains a very welcome surprise. Along with updated remaster of the original album, some alternate mixes and a few demos (all depending on which Deluxe version one picks up since there appears to be more than one version available) there is also a one hour and twenty minute concert from The Royal Albert Hall, June 1971. And what a concert it was. The Band is prime form throughout the show which features songs from The Band’s first three albums. If one is familiar with and enjoys The Band’s Rock of Ages or Live at the Academy of Music releases then this concert will be a most welcome listen. The set list for the Albert Hall concert is very similar to that of the December 1971 shows but without the added horn section. The sound is first rate and group’s playing and singing is excellent. Highly recommended and available on Tidal and Qobuz.

In Roon/Tidal the live tracks are not flagged as such.

The live tracks start with “The Shape I’m In” followed by “Time To Kill” and continue for another 18 tracks to the end which is “Rag Mama Rag”.

I hope that helps.

I’ve listened a couple of times now. I think the change or running order is a bit gimmicky but enjoyed the live tracks, one or two gems among them. Though sound quality is pretty good it’s a marked step down from Rock of Ages or The Last Waltz. Anyway it’s new material and will likely get heavy rotation here these coming weeks.

Cheers for that, I have selected all the tracks and bulk marked them all as live. Room meta data service missed that. Is that a bug…

This has been on by speakers now for 2 days of constant discovery.

It is strange how song order burns itself into your neurons. Many of us could tell you immediately what song comes next on a popular album. After listening to the new song order on Stage Fright I have to agree with Robertson - it makes thematic sense. If you think of the album as a short story, the songs hang together in the new order.

The Live at Royal Albert Hall tracks are a real treasure. The interplay between and among the Band members is nothing short of amazing. The liner notes say that it was recorded on a 4-track and that considerable technical wizardry had the be done to make them listenable. If so, they need a Grammy. The recording absolutely crackles with clarity. Rick’s bass lines aren’t buried in the mix and define the rhythms; Robbie’s pinch harmonics vibrate the fillings in your teeth; Garth’s meanderings and atmospherics rise and fall in around and through the melodies; Richard’s voice and piano never sounded better, and you can really hear his left hand; and Levon - damn how we miss him - his voice, mandolin, and signature drumming stamp each song.

Sometimes I get lost in the high-res arguments and think my ears either aren’t sophisticated enough or are too old to hear the difference. I’m listening to this in 24/192 and am just slack-jawed at the audio quality.

If you like The Band or never heard them the first time around, this is a “must listen”.

It is strange how song order burns itself into your neurons.

You have a point and it gets to the root of my fairly feeble argument. While:

I have to agree with Robertson - it makes thematic sense

maybe true, my response is simply “But it isn’t Stage Fright is it?”.

Perhaps “isn’t Stage Fright” as we’ve been used to it is more appropriate. The ten songs of the original album are still there, only the order has been changed. If there were different songs or songs that had been dropped completely I might agree.

You can always make a playlist in the order you prefer…