So I’ve just ripped my copy of The Beatles Abbey Road Anniversary Super Deluxe Edition. It has three CDs and a Blu-Ray.

Right now I have the follow directory and metadata setup.

Eventually I hope to also add the following from the Blu-Ray:
96kHz/24 bit High Res Stereo.

Now I also have two older versions of this album:

Roon isn’t handling the above setup well. I can’t see the older versions. I’m not being shown a Versions option.

The only entry I’m currently seeing in Roon is ‘The Beatles - Abbey Road’, and Roon is only showing me the Disc 2 and Disc 3 tracks of those session CDs. Everything else is missing in action.

What changes do I need to the directory structure and metadata in order to get Roon to handle it all properly?

Roon seems to really struggle when a collector has multiple versions and extended release versions of albums. There doesn’t seem to be a consistent way to get it right. Each case seems to be handled differently.

I had similar problems with ripping my Super Deluxe Edition. I also have the 2009 24/44.1 version in Roon.
At first, it separated Disc 1 of my rip, and it was shown as a duplicate to the 24/44.1 version.
You simply have to deselect this rip of Disc 1 as a duplicate, and then merge this stand-alone rip of Disc 1 with the rips of Disc 2 & 3, thereby making a 3 Disc edition.
There is some tinkering required in Roon to get this right. It must be a problem with the metadata supplier.

So I moved the two session discs (CD2 and CD3) under the same directory as the 2019 Mix disc and put the files for the mix disc in CD1. Then Roon was showing all three discs together, but no other versions.

But then it updated and now it’s showing the release date of the I don’t know what, and the file format of the 2009 digital remaster. It’s saying the 2009 remaster is selected and that there are now just two versions. 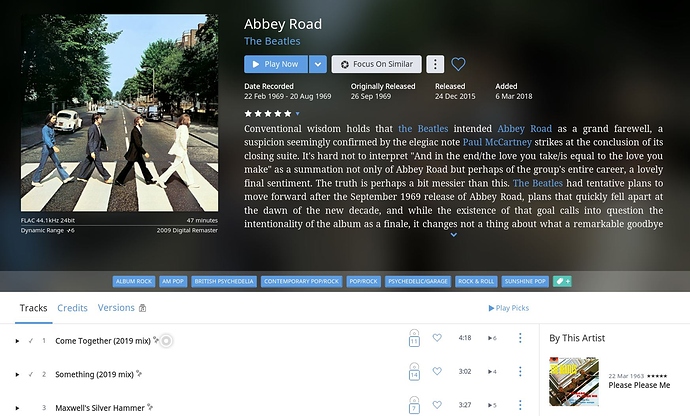 The primary seems to be the 2009 remaster and its files, but track names are a mixture of versions, but mostly 2019 mix.

The second version shows the directory path for the original version and its files, but when I select it gives the track names of mostly 2019 mix files.

The 2019 mix version isn’t an option on the versions tab. Instead it’s displayed as a second list of the album in the By This Artist list of albums. It shows all the discs and uses the right track names. 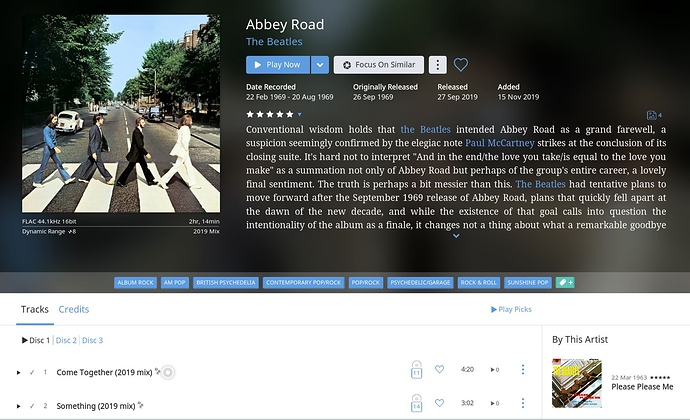 It’s all just a little mixed up. But at least I can access everything.

It doesn’t matter where/which directory you place the files. Roon doesn’t work like that, and doesn’t ‘recognise’ folders.
Hence, why you have to merge/edit files in Roon, rather than by using directories.