Is anyone else have the same issue with the new The Black Keys - Dropout Boogie album :
Total album time : only 6 minutes
No time info for tracks 3-10 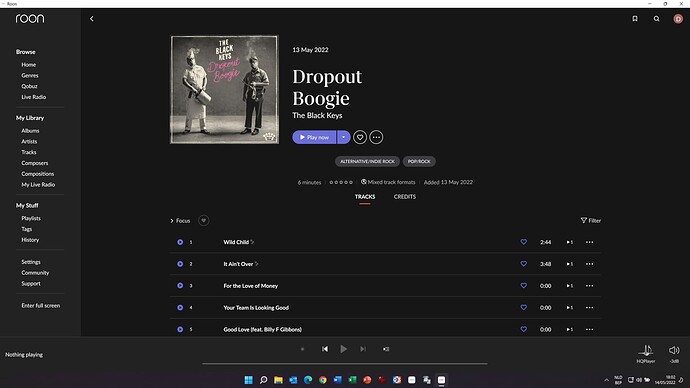 Before I report it to support, is there someone who can verify.

P.S. No problems in playing the complete album - great album by the way.

Thanks.
Will remove and re-add.
Dirk

I think they released a track or two before the full album release. Maybe you added it then?

I have removed the album and re-added it to My ibrary, unfortunately with the same result.
In doing so I lost the number of plays, which I do not really care, but it does proove that this album was re-added. 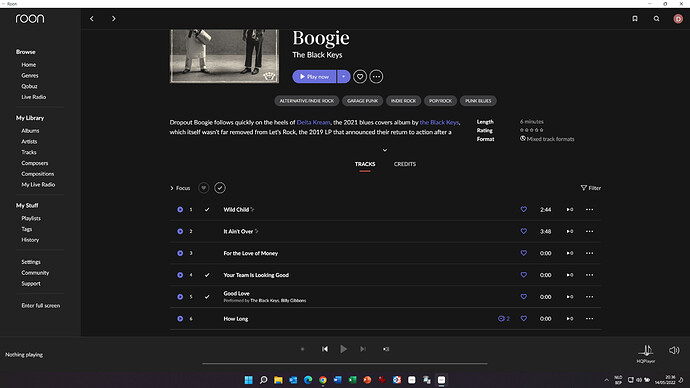 Trying to re-identify does not make a difference either.
Wondering if this could be an error at Qobuz Europe?

Can this topic be moved to Support Metadata please?

I added it today from Tidal (US). It all appears to be correct, so yes, must be a Qobuz issue.

Moved it over @Dirk_De_Taey, let’s see what @joel can tell us. It does sound like a regional thing. It’s a good listen.

Problem fixed at Qobuz side. Re-identifying this monday morning did the trick.