The cover of "non album" tracks is ugly

Sometimes I have some spare songs of a single artist that are not an album.

Roon collects them correctly into an unique “fake” album, with a grey cover, with that artist and the tracks are correctly sorted in alphabetical order. That’s a very excellent job.

What I don’t like it’s that “grey cover”, that is very ugly.

Could you think about another cover for that occasions?

Or could Roon use the artist artwork in such case? Or just allow us to choose a standard cover for that “non album” folders? 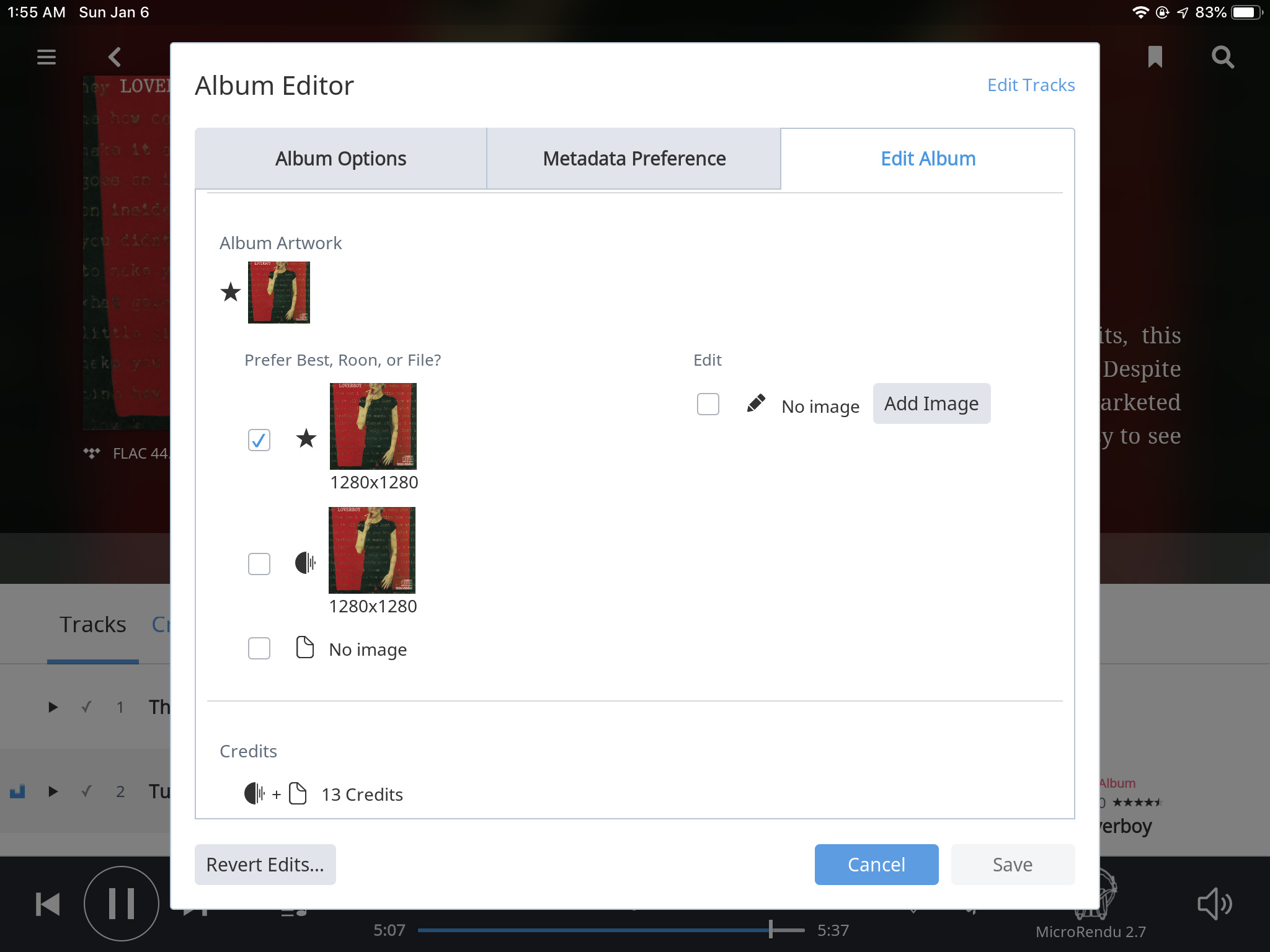 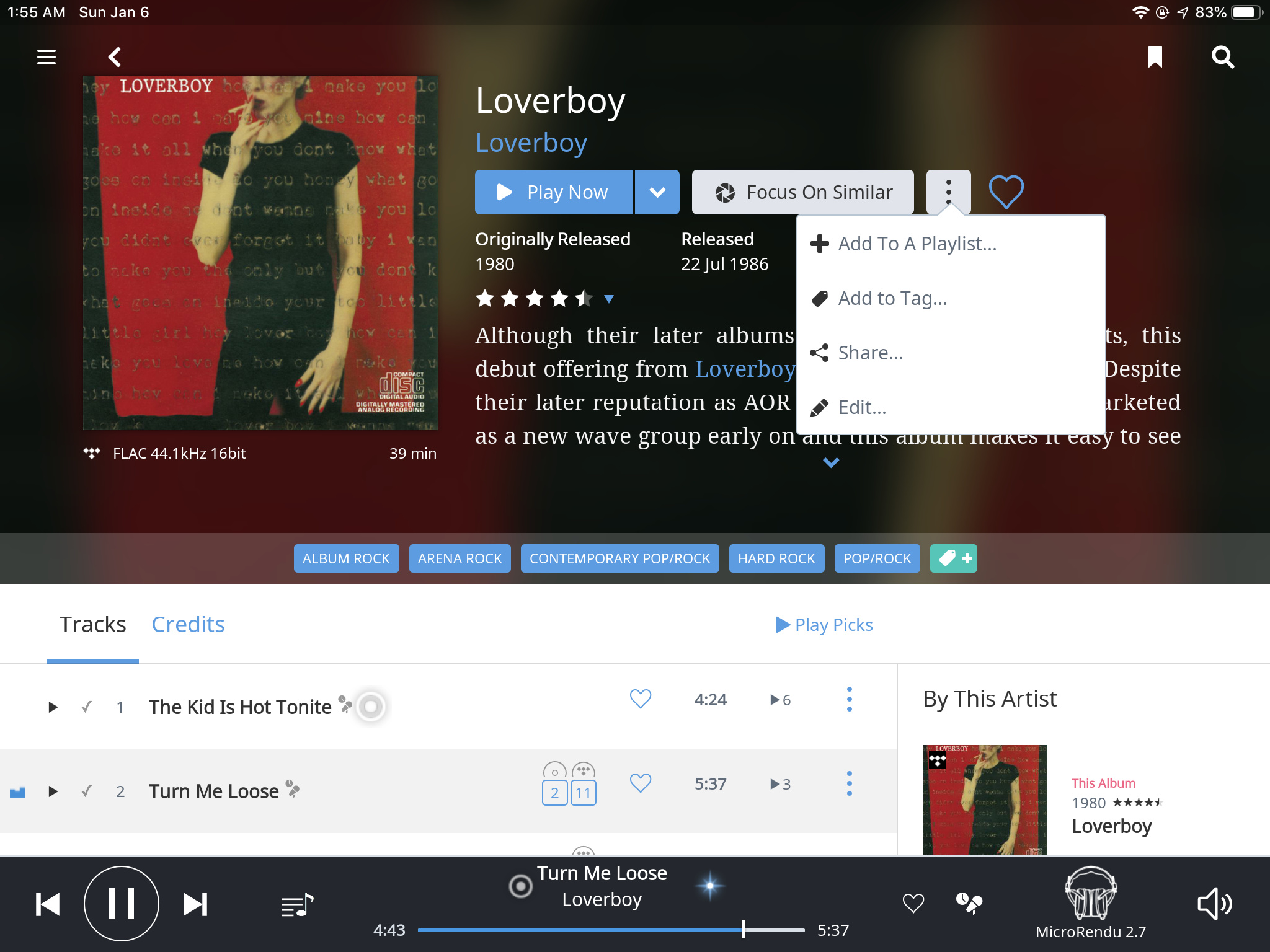 Select the three dot menu and select Edit. Then select Edit album. You can insert your own album art.

Thank you very much.

Just another question: it’s not possible to change that standard grey icon for all non-album together?

I have 100+ albums that are not really albums, just collection of single artists (very well ordered by Roon), and I don’t want to edit them all.

I just don’t line the grey icon in case the album (or the artist single tracks collection) has not an artwork.

Just another question: it’s not possible to change that standard grey icon for all non-album together?

Sorry, no, not at the moment. When editing multiple albums at once, the Album Editor does not have an edit field for adding your own album cover to all the selected albums. I’m afraid that field is only available when editing a single album.

Then my feature request is to change or allow us to change the “empty artwork” albums default image.

I simply don’t like to browse my albums and see those ugly squares grey artwork in my non albums collections.

To be clear, I ask if possibile not to change multiple albums together but I ask to change the default artwork when an album is without artwork into one that is less ugly.

I hope that I express myself correcly and clear.

Agreed. A great suggestion. Why not have the Roon logo instead of something that looks like a slate tile?

You explained better what I wanted to say!

I second the request.

@RiseFall123 - btw those parquet floor style images are also used on other occasions when no actual picture is available (genres, artists and the like). And - if you can access the application directory which is usually not possible for mobile devices (iOS, Android) - you could theoretically change the generic images even now. But those changes will not stick after an application update.

Also, it would go well with:

How can I add artwork for Genres? Feature Requests

Hi, Already know how to add art for albums/artists, but could not find a similar function for missing Genre art. E.g. I promoted some genres to Top Level (like Fado, Medieval, Hardstyle) but Roon does not show artwork then. Regards, Gerard

I agree the grey square is ugly!

I went through the trouble of editing the artwork for each album that didn’t have any. Looks much better now.

I agree the grey square is ugly!

I asked them about the grey square…it also appears with Tidal artists. No answer, guess they are working on it. The thing is its totally unnecessary, there are multiple ways this can be avoided. To me the grey square = a failure. $500 is a high cost to pay for so many failures…imo

There is a workaround so it’s not a failure. If you don’t like the grey square, replace (edit) the photos.

There is a workaround so it’s not a failure. If you don’t like the grey square, replace (edit) the photos.

That would be a Negative…can’t do that with Tidal ‘Artists’.

That would be discussed here in detail.

I know this has been submitted before. Yes I did research and try to fix based on the support provided. However nothing is working. What I have done. Re-install Roon Server Logout of Tidal and disable then Log back in Unfavorate the artist in TIdal and refav again Clear Image Cache Artist logo is missing in Roon but shows up in Tidal From Tidal [alexc] From Roon [Screenshot%20(2)]

you could theoretically change the generic images even now

A pointer: the jpg files providing the art follow a Generic naming pattern. If you can find 'em you may then get an idea what to do. If not, it’s probably better to keep things as they are. I suppose it’s generally not helpful to discuss this kind of alterations in detail here. My bad that I mentioned it.

Then I won’t touch anything.

I just hope that a better looking icon will be used in the near feature, those ugly grey squares are very bad, and ruin the elegant Roon interface because I have many artist collection tracks that aren’t album, just collection.