The Cranberries - To The Faithful Departed [Resolved] 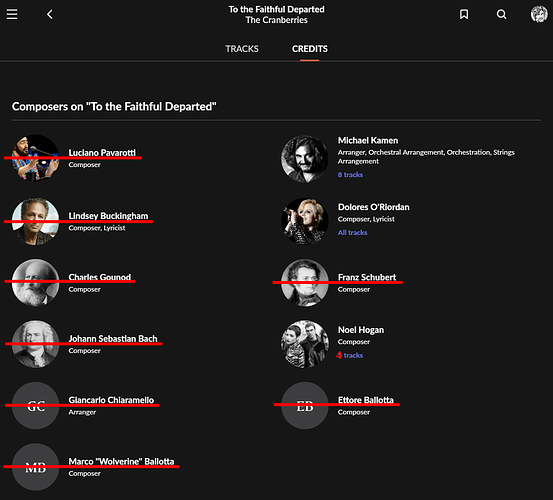 Strikethroughs are not credited at all in the booklet. Some of them possibly sneaked in from another release (“The Complete Sessions 1996-1997″ from 2002 - not this release!). Noel Hogan (wrongly?) credited for track 12 “Will You Remember?” on MusicBrainz. 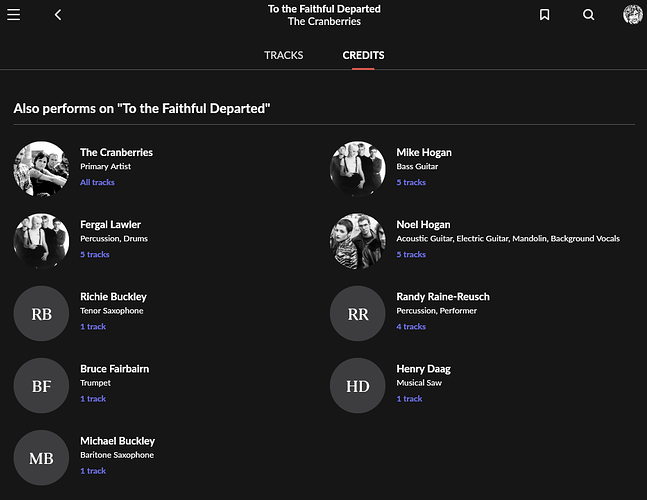 grafik934×721 79.4 KB
Why some band members got separate performer credits, but only on some and not all tracks, on MusicBrainz, I don’t know. I also see Randy Raine-Reusch credited only for track 2 “Salvation” in the booklet.

This online source is, as of my best knowledge compared to the actual booklet, correct about the credits: To The Faithful Departed | Cranberries World

Same issues/complaints (credits sneaked in from another release “The Complete Sessions 1996-1997″ from 2002; dubious credits from MusicBrainz) about other albums of The Cranberries too, just took what struck me as the worst example to show.

Especially with the new extended use of relations (Genres) with Roon 1.8, it’s not nice that Roon makes up Credits of it’s own.

Are this many fake credits not worth a response/explanation from the Roon team?

Still seeing these artists listed by Roon for not taking part on any song on this album.

Something is creating a bit of a merge here, and this is an example of why: 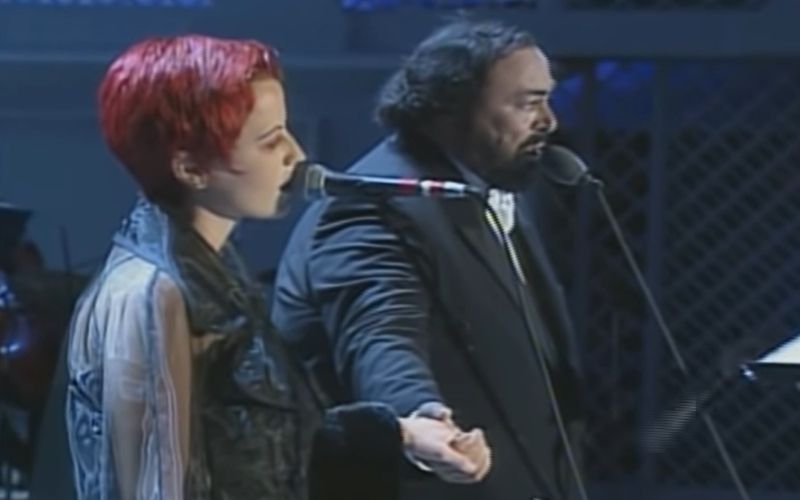 Dolores O'Riordan and Luciano Pavarotti's cover of 'Ave Maria' was used at the opening of the Irish singer's 2018 funeral.

Metadata team has been informed.

Thanks for reporting this.
Actually, i have another version (“The Complete Sessions 1996-1997″).
But the credits are wrong anyway.
In this version there is a live performance with Pavarotti:

image1356×99 13.7 KB
But “Ave Maria” is credited to all possible composers (Bach, Schubert, Gounod, Pavarotti and more…)
The error is at track level, though, not at composition level. If i go to composition i get 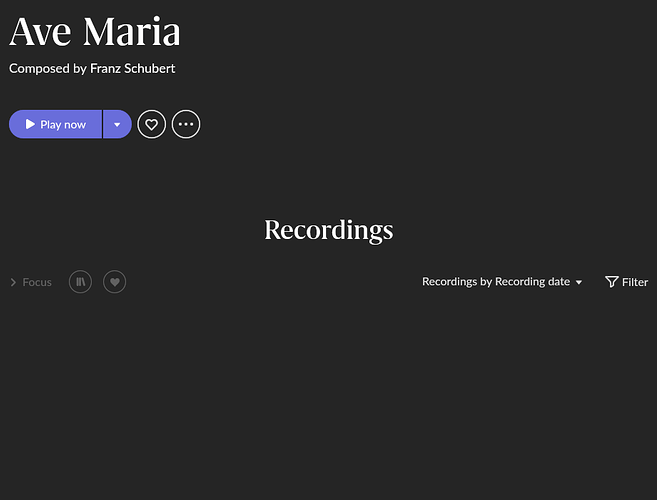 nice! the album is missing. (this, i think, is the well know 1.8 bug of missing performances…)

Ok, so… This issue is resulting from getting track credits for all tracks on all editions of the album (for performance purposes) and ending up with credits from “deluxe” editions on editions they don’t actually appear on. There is a ticket in to resolve this, but the work has not been scheduled yet.

Please be patient, this is a tough one.

My apologies for the delayed follow-up here.

We thank you for bringing these instances to our attention, where credits from deluxe or expanded editions are appearing on the original canonical releases. I’m pleased to report that this has been addressed and corrected on a number of titles, including the one you reported here.

We appreciate your continued assistance as we strive for a high degree of metadata accuracy in Roon.

The performance credits for track 17, Ave Maria have been corrected on To The Faithful Departed (The Complete Sessions 1996-1997) to reflect only The Cranberries, Luciano Pavarotti.

Thank you for the heads-up on this!