The (partial) demise of "Other Versions" functionality

Two or three builds ago, the functionality of Other Versions was changed to avoid button redundancy in the situation where you have a local album that also appears on Tidal. I was broadly in favour of this, after all there’s no point having buttons on screen with no purpose.

However, I have now come across the fairly common use case where I have a lossy version of an album that I would like to listen to (and add to library) via Tidal.

Before, I could click on Other Versions to get straight to the Tidal content, then add to library.

Now I can no longer do this from the Artist Screen, since Roon obviously masks duplicate content from Tidal content.

The only way I can currently work around this is from the search results screen, where I can ‘tab’ between all local and Tidal content, e.g.: 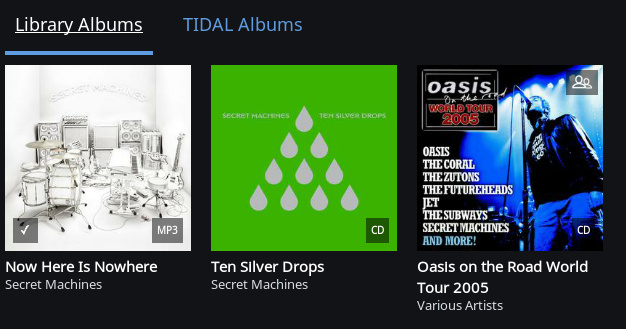 You can see here that Now Here Is Nowhere is a local mp3 and lossless on Tidal.

Is there any way that Other Versions can be supercharged in some way to realise that if a different format or bit-rate album exists locally, it is still valid to provide the Other Versions button that links to the Tidal content on the album view screen?

EDIT: And it looks like a redundant post in that I have just seen a “Go to TIDAL version” under the Elipsis menu. FML.

I would like to see all albums that are available for an artist on tidal, even if I have some of them on file locally. Version differences and so on. Why remove?
I can handle two versions without fainting…