There’s a small error with the metadata for Unkle’s The Road: Part Two, as illustrated below … 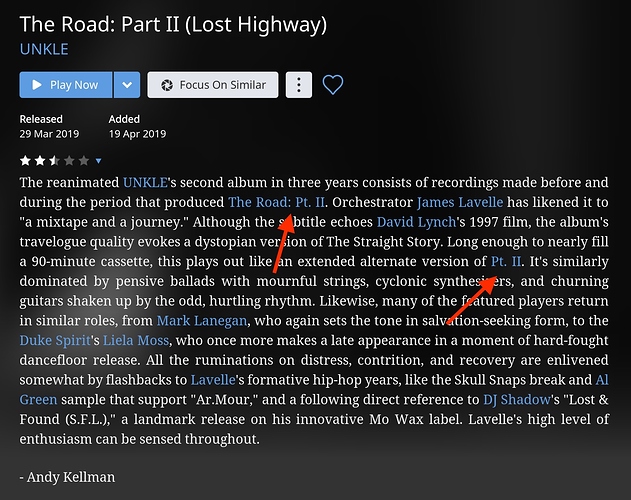 In both cases the hyperlink should point to The Road: Part One (not part two). The metadata on allmusic is correct, and the link does resolve to the right album, it’s just mislabeled in Roon.

@dylan I think that Rovi have already fixed this. We’ve just not picked it up yet.

As Joel mentioned, it looks like this has been corrected by our metadata provider already and should reflect in Roon within one to two weeks. If you’re still seeing this as an issue after that time please let us know!

Hi @DaveN. I’ve just taken a look at this and there is still a problem. Our metadata provider has added a corrected review, but failed to remove the old one. It was 50/50 whether we’d pick up the correct one, and we’re still picking up the old one. We’ll get this sorted out ASAP.

Hi @joel and @dylan, this is now (kind of) fixed. The text references Pt. 1 rather than Pt. 2 but the hyperlink has gone. The latter isn’t a huge deal, but a bit of a shame as the previous incorrectly labelled version did in fact link through to Pt. I.