I currently own a Mac & iPad, and run roon on both with no problems. I recently purchased a Synology NAS (DS1520+) and wish to run roon from my NAS. I can connect to the NAS via both my Mac computer and iPad, but when I try to connect roon on my iPad to the ROON server on my NAS, it can’t see it. I’m sure I have made some kind of error when configuring my network connections, but I can’t figure out what I have done wrong. Can anyone steer me in the right direction

Can you connect to the NAS via its IP address from your iPad?

Yes I can. I can connect using the IP addreaa and by using Synology assistant

Is the Roon Server App definitely running? Can you access Roon via any other devices?

When i double click the roon icon it shows that it is running. I tried to connect to roon using my Cambridge Audio DAC and it also couldn’t connect.

What network hardware are you using and how is everything connected?

I have the NAS connected directly to the router provided by my internet service provider.

the strnage thing is, I can connect both the iMac and the IPad to the server, but when I introduce roon, neither can see the roon server. I’m assuming that I have made an error with one of my network settings on the NAS network control panel.

Is your WiFi provided by your ISP’s router too? Are your Mac and iPad on the same subnet as your NAS?

Yes, everything is on the same network. And the router is provided by the WiFi provider.

Have you tried rebooting your router and stopping/restarting the core?

I just re booted my router, but I can’t re boot the NAS, since it’s in the middle of doing a parity check, soI could corrupt the data if I re set it now. The router re boot didn’t help.

No need to reboot the NAS. Just stop the Roon Server App and then restart it within Package Center.

Now I have a bigger problem. I can’t connect with the NAS at all.

OK I managed to get back into the NAS, but still can’t connect to roon

Have you enabled SMB under Control Panel > File Services in your NAS?

Hi Graeme. Yes SMB was selected, but I’m still locked out of my NAS. I think I may have inadvertently changed one of the settings from Mac to windows???. Either that or I changed the IP address when I was experimenting with various settings when I was trying different things to gain access to ROON. I can still see the files on the NAS when I search it on my Mac finder. I just can’t log onto the DSM. I tried using Synology assistant, and it can see the NAS, but it can’t connect. And here I was, thinking my situation couldn’t get any worse!!!.

Just asking for clarification - the NAS‘ LAN interface was set to DHCP? And what does the DHCP server section of the router say about IP address leases? Is the NAS among them?

Hi, I tried to set up DHCP on my NAS, but it was in conflict with DHCP elsewhere on my network., so I’m not sure where to go from here.

With DHCP I meant if the NAS tries to fetch an IP address. Which makes it a DHCP client. This is important: there may only be one DHCP server within a network (usually the router), the instance to manage IP addresses. Just set as shown in the screenshot. Tick 'Yes’ in ‘Use DHCP’. 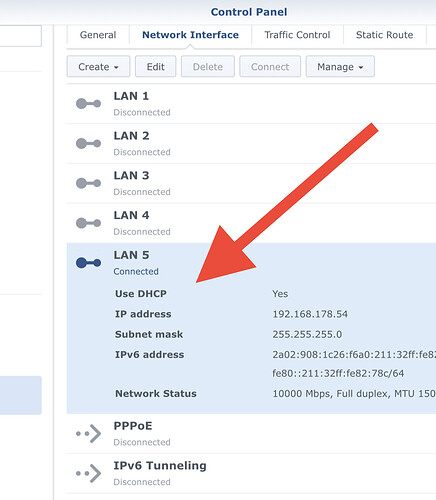