This song is not available in tidal

I got this error 2 times. I can play the track in tidal app but roon will say this song is not available tidal

You may be suffering from the same problem reported here

Roon 1.8: Error message "This track is not currently available from TIDAL" Support

Several people seem to be having the same issue: Today I also have that problem - as there are different configurations involved maybe it is a general issue? For me a reboot of everything (ROCK, Ethernet switch, Internet Router, iMac) did not solve the issue, I was able to play the songs I could not play before. But other songs are now not playable. Maybe @support is able to investigate. Thanks a lot!

I cannot play this song yesterday

Listen to One Last Kiss on TIDAL

I can play that song (track 1), but tracks 3-6 on that album are marked as unavailable. What do you see?

Perhaps there is a geographical licensing issue?

I.e. 'Sweet Jane‘ from the Cowboy Junkies album ‘Trinity Session’.
Works ok from the Tidal app but not out of Roon.

Roon is skipping a lot of numbers, saying not available in tildal right now. Played them yesterday.
Works in tidal.
Tried logout, restart core, tidal login.
Not working
It is almost useless

Seem to be having the same issue. Started playing an album, third song said unavailable. Restarted playing the album. One by one the tracks started failing.

Can play the album in Tidal natively.

I have it a lot. The Tidal error. Song on tidal. 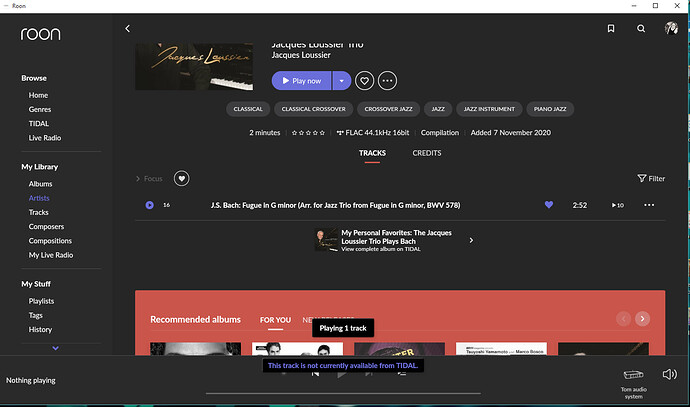 I am having this issue as well. The album obviously from lake street dive, “same old days” will not play. This is both from the mqa master version and the flac version. There are other stiffs doing this as well but this is repeatable

Same problem here in Switzerland. After rebooting ROCK it’s working for a few minutes. Then the issue starts again.

Hey all, thanks so much for your patience. Let’s keep the discussion in this thread, where I’ve posted an update:

March 15 19:00 GMT: It looks like this problem cropped up again over the weekend, and Roon staff is currently investigating. Thanks so much for your patience, we hope to have this resolved soon! We’ll update this post when there’s more detail to share.