This track is not currently available error from Qobuz

I am having troubles like this quite frequently as well. Up to now I though that Qobuz doesn’t offer the specific album for streaming and I didn’t really investigate.

Right now it happened again with the album “Alright Jack” from a band called “Home Service”. Please perfectly via the Qobuz Webplayer but Roon tells me 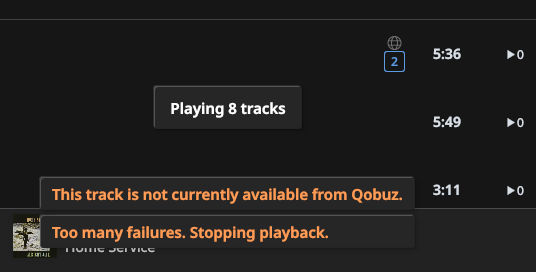 Same is happening with John Denver’s “Earth Songs”, but I saw that Qobuz seems to have removed this album from their catalogue

Thanks, @papa.jay — I’ve passed this along to the team for investigation.

Hey @dylan,
any news on this issue ?

I just checked on this again and both of these albums are currently playing okay for me from Qobuz — Are you still seeing the error from Qobuz for those two albums? Are you using a US Qobuz account?

I am located in Europe, Austria.

The John Denver Album which I had marked a favourite doesn’t work but as I already wrote it seems that Qobuz removed this album from their catalog. I deleted the album. I searched again for the album on Qobuz and saw that it’s still there, but it seems to be a different version of the album. I added this version which works without problems.

So no more troubles on my end. Thanks for getting back.