Hi folks, I cannot see TIDAL browser with new albums in Roon Remote apk after the upgrade. I also cannot see any Lyrics. I have reinstalled Roon Server and Roon Remote also. Any ideas?

Hi, What hardware is the RoonRemote running on?

Same here, no tidal on my iPhone 6.

Same on my iPhone. Seems like it didn’t make it into 1.0

Same here on an Android phone

I also cannot find similar artists, influences, followers, etc. This feature is managed by Roon I believe, not TIDAL.
Three major things are missing then: TIDAL browser, Lyrics and connections.I have tried Nexus 7 as option, but with the same result. Already reinstalled Roon Server, Roon Remote, rebooted, etc. I am in Europe.

I think you’ll find that focus isn’t there either.

The Roon guys realize there are features missing and at least some will probably make it into future releases.

They wanted to get the phone app out the door because of all the requests for it.

A lot of people are actually amazed at what was included in the phone app. Many people said it included way more features than they expected. Some thought it would just be a control (play, pause, skip, etc) app.

I’m pretty happy with what we’ve got so far.

[quote=“Luke_Rajec, post:5, topic:9793”]
Motorola X.
[/quote]Hi, I thought it might be a small screen device, that device will use the Roon Phone app, which does not [yet] have all the features of the RoonRemote on larger screens.

The devs know there is more work to do on this, however they felt it was time to launch it with the current feature set, rather than delay, as there was a significant demand from user.

Lyrics still there, choose the album and click the 3 dots beside the track. 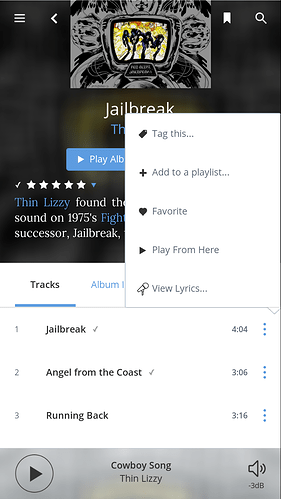 Lyrics still there, choose the album and click the 3 dots beside the track.

What phone is that running on? Icons look nice. They’re totally ugly on mine.

I think the phone app is great, but serious listening still needs the iPad or surface pro, but it’s great for a quick listen.

I wouldn’t think it has to mirror the bigger app in functionality, I see it as more a complimentary device.

The app is lovely and quick on my iPhone, but I would love to get Tidal there too…

The great thing about Roon as I see it is that if enough people ask for something we will invariably get it (once it’s feasible).

I just don’t think the iPhone app necessarily needs be a clone of the iPad app.

I understand, but these features in RoonRemote apk were present prior upgrade to 1.2. I am not happy that now I have to use laptop with Roon in remote mode, instead of comfortable tablet or mobile to fully control core RoonServer installed on another laptop.