I haven’t had a proper digital hifi source in a while, and registered a Tidal and a Roon account this week to test it out.
I have a HTPC which I listen to through a Samsung TV, HDMI to the TV, and Toslink to an OPPO HA-1.
The Tidal desktop app for windows sounds very good this way, but when Tidal is used through Roon, it sounds degraded. It is particularly audible when listening to solo upright bass - there is a high pitched noise added in, that sounds perhaps like aliasing and really reminds me of the good old real audio days…

I will check if it sounds the same through a different audio device, but think that the difference in Tidal desktop app, and controlled bt Roon points to something else being wrong.

Is there anything obvious that can cause this problem?

Well…
Tidal desktop simply streams tunes to your DAC.
But what roon does (three separate computers, three applications…) - “Nobody knows but Jesus”…

Initially I couldn’t get my HTPC to use the Oppo USB-DAC. So I scraped my flaky win7 system, and did a clean win10-install.
On win10, the Oppo shows up as an USB-device and plays beautifully. The HDMI>TV>Toslink-issue remains the same, though (Tidal desktop handles it, but not Roon).

Dosen’t matter much now, but it makes me less certain in my view that digital signal paths need no attention to work perfect, and it is strange that it took a “hifi-player” to do just that…

When configured properly, Roon will stream bit-perfect to your DAC, so if you’re hearing differences between Roon and the TIDAL desktop app, the first thing I would recommend would be checking Signal Path.

I compared captured waveforms from my soundcard on my PC playing the same source from Tidal using the Tidal app and Roon and capturing via Audacity There is quite a big difference between them when you compare them. Which one is correct I have no idea but there is differences on the same hardware.

@CrystalGipsy
That is interesting. Assume you took note of all player audio/ DSP settings in both Tidal and Roon to compare ? Can you elaborated?

Everything on default settings. I dont use my PC for music playback normally I was interested in seeing if there was any difference. So no DSP or anything in roon . I’ll check everything to make sure.

Worth being absolutely sure that “default” means bit-perfect in each case. Don’t rely on default unless you know what default actually is. As you noted, for example, no DSP in Roon. Be sure that your PC playback in Tidal is exclusive and not going through the OS mixer or sound card . E.g. being resampled to 48 k

When you play a Tidal track or album the flac files are downloaded to your PC or Roon server. AFAIK, the only way you can see a different result is if

A) you are not streaming the same files
B) you are doing some processing somewhere…
C) your capture method is flawed somehow ( e.g going through the sound card)

If you can rule out A, B and C then it would be interesting to know.

The signal path looks the same, both with the HDMI output and with the USC-DAC output choosen (what I did was having Roon go with default system audio device, and choosing the different devices in the Windows Control Panel)
I understand that sending the audio through the TV-screen and then DA-converting toslink from the TV introduces several potential error sources - but when audio from all other tested windows programs sounds fine this way, this might be interesting to look into.
Sorry about the ugly images, I had no proper keyboard conected to the Media PC, so this is mobile pictures of the screen. 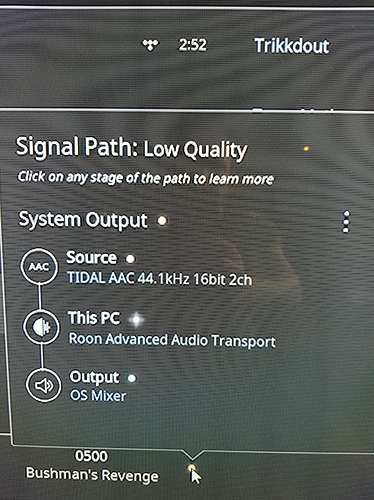 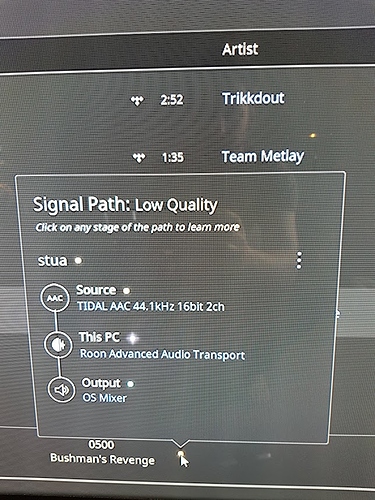 You are using the OS mixer to output which means your telling Roon to pump the audio through OS which is never the best sounding option. With the USB DAC, try going into the audio settings and selecting the USB Device itself instead of System Output.

I cant capture the output from the device when its in exclusive mode for either Roon or Tidal. So i have to capture the soundcard. but they are using exactly the same windows driver, soundcard, signal path and hardware though, no dsp and roon indicated lossless…Both at fixed volume, both hifi quality not MQA, Roon shows lossless, can’t check for that in Tidal though. II noticed a difference. I have now aptured the same track 4 times from both sources and used two different tracks from two different artists.

The results each time where different for both sources so not highly reliable in the end. So a pretty useless test.

In Roon’s signal path, “low quality” is not equal to “lossless.”

I get your testing difficulties, but using the OS mixer isn’t going to yield optimal results in either Roon or Tidal Desktop. For purposes of a listening comparison, selecting “Hi-Fi” and your DAC in Tidal’s streaming settings and going with @Rugby’s suggestion in Roon (with the necessary adjustments so that your signal path shows as lossless) is probably as close to “apples to apples” as you’re going to get.