Tidal file distorting on my system in multiple set-ups 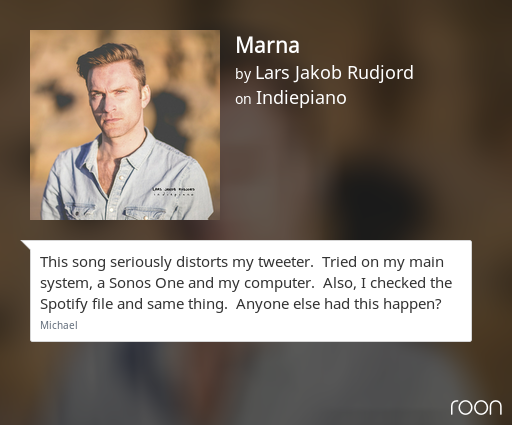 Does the Tidal app play it OK? Can you Chromecast it from there to your system and get a good or bad result?

EDIT: I see you had distortion issues before. Were these ever resolved?

For the first time since using Roon, I had some slight distortion today playing both streaming and local files. I am just curious whether this has happened to anyone. The distortion was sort of a short squeal; not sure how else to describe it. I wonder whether it might have been some network problem with my ISP. My setup: I recently installed a Nucleus, which is hard wired to my router. I also have a Devialet Expert 200, which Roon has conveniently partnered with so I can start, control an…

I have just played this, very nice and relaxing piece on Tidal 16/44

There is a close micked brush percussion which is prominent on the right speaker and spreads across the sound stage to the left.
This is clear on my system Meridian DSP5200SE. Also as the tune fades the percussion fades gently as the piano rings beautifully across the middle of the sound stage.

Could it be your tweeters are having trouble resolving all this?

On second listen, could there be a little distortion at the track beginning? A crackle even… hmmm

@Anthony_B @Chrislayeruk Thanks for your responses. (BTW, Anthony, I did have a previous issue with distortion but I now chalk it up to a network issue.)

I am convinced now, after some tests this morning, that it is a file issue, not only on Tidal but also on Spotify. I have played the referenced tune via Roon, via Spotify and via Tidal, all independent of one another. For example, on my Win10 computer, I have played the tune from all three services through my computer’s internal speaker and have had the same result, a slight crackling/fuzziness from the high hat (I am thinking), mainly from the right speaker at the beginning of the tune. I have also heard it via Roon on my main system and on a Sonos One in a separate area of the house.

Anyway, thanks for your responses. I am disappointed because it’s a really lovely album!

Yep, I agree with you. Some crackle (for want of a better word) early on in the righ speaker. Must be the file…

Yep, I agree with you. Some crackle (for want of a better word) early on in the righ speaker. Must be the file…

Glad it’s in the file. It really worried me when I first heard it via Roon on my main rig!