Tidal masters not unfolding with 1.7

Hello i’m running roon core on a late 2013 imac i5 512gb ssd and only using tidal/roon with no local library. Prior to 1.7 i would get masters albums unfolding to 88 and 96 khz. Now i only get the 88 kHz unfold and tidal masters albums above an 88 unfold i.e to 96 kHz unfold are not being recognised as masters albums anymore. Instead they just play as CD albums 44kHz with no unfold.@support

Apart from that everything is very smooth with 1.7 for me. Core is on 200 Mbps wifi. thanks mk. I have rebooted computer and audio gear with no results. To recap if i choose any masters album now that previously unfolded to 96 kHz now it just plays as a normal CD 44.1K album. Before 1.7 i would get a 96K unfold with that same album. All roon settings are unchanged.

Can you share a screenshot Device Setup and of the Signal Path for this Zone?

Does this happen with all endpoints?

So i go from imac core optical to chord mscaler to chord TT2 to headphones. In the top picture before 1.7 i would get a 96K unfold. After 1.7 i only get the 88K unfold in the same manner as before 1.7. Bottom picture. Photos taken a few minutes ago. 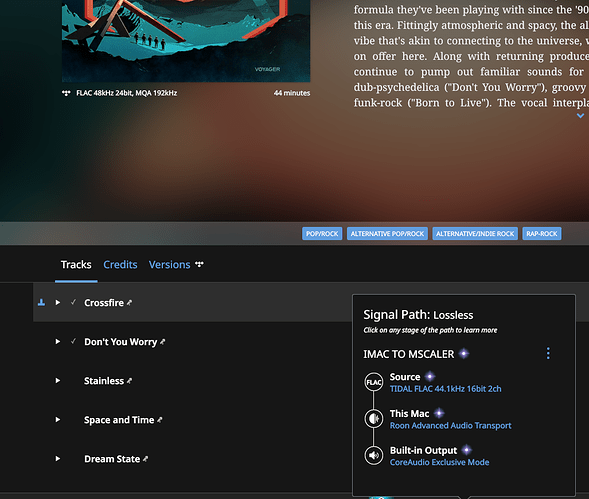 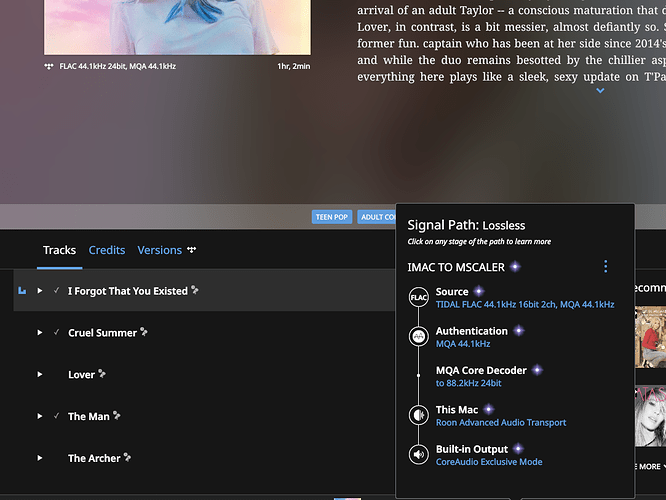 Not sure about your first picture, it shows MQA under the album cover but there is no mention of MQA in the Signal Path.

Hi Tim another snapshot to illustrate what i’m saying. Since 1.7 i’m only getting unfolding to 88.2K. Anything above that gives me normal CD quality with no unfolding. Before 1.7 i was getting unfolding up to 96K. I use optical out from my imac to a chord mscaler. Optical out is limited to 96K on my imac so i had no problem before streaming 96K unfolded MQA. This photo was taken a few minutes ago. Please click on it to enlarge it. 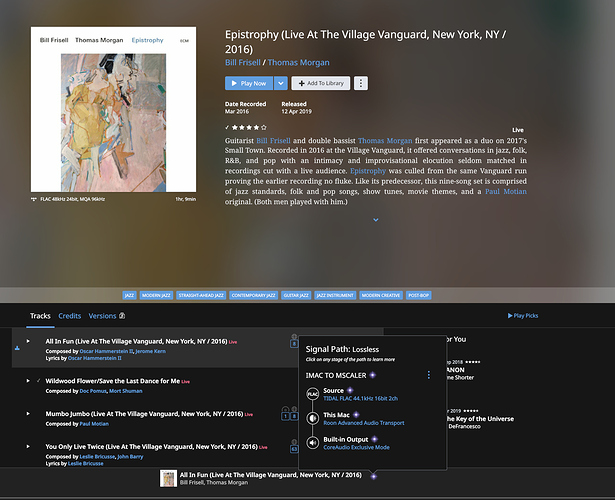 Please note I am just another user trying to help and you may ultimately need assistance from someone at Roon.

Here is what I see when I play that track: 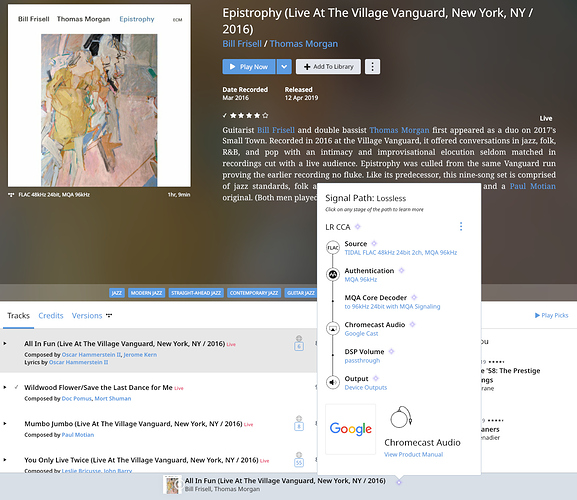 Note that since I’m playing to a Chromecast Audio all I get is Roon’s first unfold but that is shown as 96 kHz.

Nice album, I just added it to my library.

I also tried playing a track from the Voyager album and got the correct identification in the Signal Path: 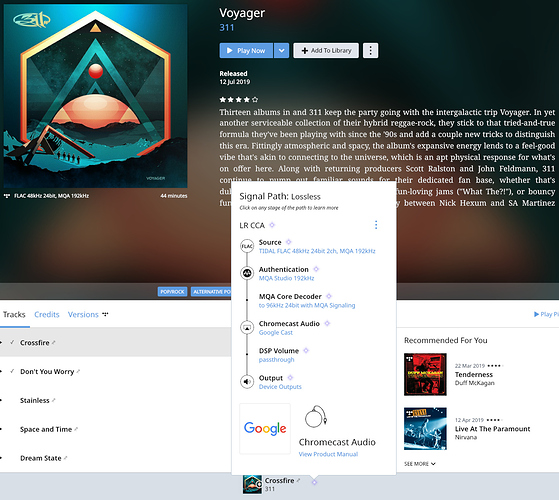 Good news problem solved Tim. With 1.7 under services Tidal on the left hand menu there is a new option to pick streaming quality and i had chosen hifi not Master. When i changed it to Master I can now get the unfold up to 96kHz as normal. The reason i chose hifi before was because most of the time i just stream CD quality 44.1K files. Thanks again.

On an unrelated note is the sound quality on chromecast audio good?

Glad you figured it out.

I knew about the new quality setting but did not mention it because I assumed ( incorrectly ) that if you chose a setting lower than Masters you would not see the MQA versions.

The Chromecast is connected to an old Denon receiver. It sounds good to my 66+ year old ears