I have been trying to sort out my Roon library this evening, and frankly, the way in which Roon/Tidal are working together is nothing short of a nightmare.

I had FIVE “partial” albums (of a single album), and I deleted them. Roon re-adds some of them back in of its own accord. This isn’t an isolated case with the one album (struggled with Hot Fuss by The Killers and Silence In The Snow by Trivium, to name just two of the albums).

I truly hope your next release handles Tidal integration better.

To “commit” changes made to Tidal library entries, I have to restart Roon.

Hi Rob,
there is clearly something wrong with your set up/system as this behaviour is not by design. Tagging @support for you so they can help. In the meantime, please supply more details of your system. Follow the guide here:

How To Get In Touch With Roon Support If you’re having a problem with Roon and something isn’t working as expected, you’ll want to make a post in the Support category. To help our team resolve your issue, please make sure to describe the issue, and describe your setup: Describe The Issue When you start a thread in the Support category, Roon Support will need to know: What’s not working How often the issue occurs This could be “every time I start the app”, or “every time I click a certain but…

Only 2 weeks ago, I had to reinstall Windows 10 and restore my Roon library. Before that, the “Add To Library” button was hit and miss. It was only yesterday that I found the ability to “group versions” of the same album together (as I have my own versions that I use at home, as well as favourited in Tidal when I am out and about).

I am using the latest build of Roon on Windows 10 Release 1903. All parts of Roon are installed on the same laptop: 32Gb RAM, Intel i7-4980HQ CPU, and 4xSSD in RAID0 configuration. I have cable internet with 200Mbit/s download and 10Mbit/s upload.

I had FIVE “partial” albums (of a single album), and I deleted them.

Have you attempted to merge these into single album? Select the affected albums and click Edit > Merge Albums.

I did, yes. That didn’t work last night.

Everything seems to be working better today, but still not perfect. I am trying to delete Tidal “albums” that are one track, and I get the error shown in the picture.

I spoke too soon… it decided to “rescan” and put 60 “albums” back in that I just deleted from Tidal. Roon is doing them in tiny batches of updates (between 1 and 4 files at a time), but sequentially.

I suggest you provide details of your setup, as suggested by @Anthony_B, and wait for @Support to get in touch.

How To Get In Touch With Roon Support If you’re having a problem with Roon and something isn’t working as expected, you’ll want to make a post in the Support category. To help our team resolve your issue, please make sure to describe the issue, and describe your setup: Describe The Issue When you start a thread in the Support category, Roon Support will need to know: What’s not working How often the issue occurs This could be “every time I start the app”, or “every time I click a certain but…

I have lost count of how many times I have deleted both versions of the Andrew Lloyd Webber album and the The Answer album… :’(

I’ve moved this thread over to the Support category… Someone from the team will be along soon.

Using the Andrew Lloyd Webber and The Answer albums as an example, do you see these in your TIDAL favorites in the TIDAL app?

Can you try removing these albums from your TIDAL favorites from the TIDAL app directly and then sync TIDAL in Roon and let us know if these albums are gone?

I will get that information together shortly. I managed to get rid of the aforementioned albums by re-attempting the delete then closing Roon until they eventually disappeared. The example I can demonstrate now is Europe’s “1982-2000” greatest hits album.

I deleted the album from Roon. Roon then decided to resync itself, which has resulted in the “album” being added back, but only as a single track:

Below is the same album on Tidal (with none of the tracks marked as added): 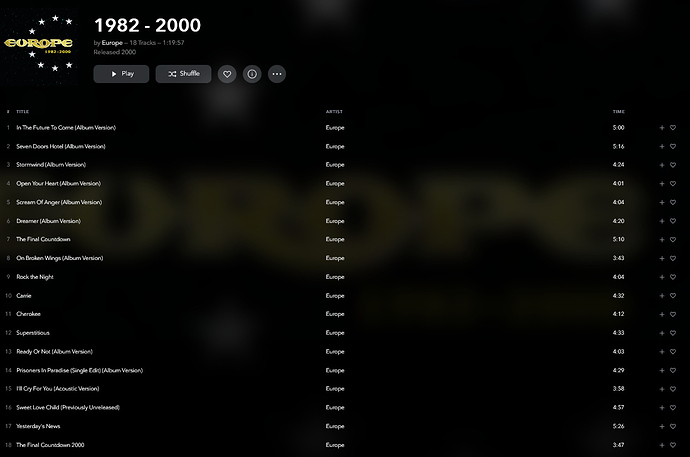 The issue occurs even when music is not playing (I thought it may have been contention issue but it does not appear to be the case).

If you need further information, please let me know.

Moving forward, I’d like to enable diagnostics on your account. First I was hoping that you could reproduce this issue and make a note of the following:

Respond with the above information and we will enable diagnostics.

It doesn’t do it to the album I immediately delete, and there is no discernible pattern. However, the following may help.

Album view was showing as me having 2151 albums.

If you sort by Date Added in albums can you see what album was added?

I had a look at the albums sorted by date added… nothing in the list looks out of place. I still cannot see what was added. It is likely that the album it added was an older (and deleted) album, and the date it is using is the date that it was originally added to my library.

What do the diagnostics say?

I deleted them using Roon in the 5-10 minutes previous.

Thanks, @Framgeld. I’ll be sure to pass those along to the team and I’ll reach out once I’ve received their feedback.