Small Green Computer Sonictransporter i7. Powerful enough to run HQP (although I do not run it).

For about the last week, since release 903, Tidal has been skipping badly. Local tracks do not skip.

I do not use dsp.

I have rebooted everything three times. I turned Roon on and off twice in close succession (you guys recommended that in response to a post on this issue). Problem persists.

I doubt that this is my network given that I have never had this issue before in my several years of using Roon. I know from the forums that many others have had a similar problem (although more with a January release than this last one).

Been using Roon for about 3-4 months now with no problems previously. Obviously my setup is different to yours but can confirm that Tidal (and Qobuz with mine) have both been skipping badly since release 903.
Also noting that the data to songs, albums and playlists in both Link in Menu have been disappearing frequently. Numerous restarts and manual syncing to Tidal and Qobuz thru the settings (services) menu seems to fix it only for the information to disappear again regularly.
I run my system on wifi and VPN and at a more than reasonable speed, that more than adequately covers data requirements. The VPN has only stopped internet traffic once over the last week which was when the service provider was doing upgrade work in the area, so connection issues don’t seem to be the problem. So is Roon update the only change during this period??
Listening to music is the objective here, not continual troubleshooting. Have just about given up after the last few days and now streaming the music directly from the Tidal and Qobuz apps without any playback or connection issues.

Roon??? Help? Having Roon does not do me much good if I can’t stream.

Hello @John_Culver
Sorry for the late response. We are gathering information about this issue.

@Fergus_B As I understand, you are located in Australia? Have you tried to use the Roon without a VPN connection? Also, could you please tell me to which region you are connecting to VPN?

I am in the US (Colorado). I do not think that I am using a VPN connection. What makes you think that?

Hello Andrew Firstly apologies to @John_Culver, as i didn’t mean to hijack his request, but what is happening to John is also happening to me so i added on to his post rather than opening a further request. I do note however that in the Community there have been a number of additional requests about these issues lodged in the last few days since the 903/904 update.
Yes, i am located in Australia and no, i haven’t tried Roon without a VPN Connection. I’m connected by ExpressVPN to a local VPN Hub in my own city, so not trying to get around any geolocation issues.More of just additional security issue for me. The only time I have had to turn it off was when i originally signed up to Qobuz as they would not allow me to sign up until i turned off the VPN. Once that fact was established that i was in Aus, i have had no problem with Qobuz.
The Skipping and Stopping is very random, and didn’t happen at all during the day yesterday, however it occurred a number of times overnight when i was streaming Roon thru my iPhone and DragonFly Cobalt. When i jumped back on the iMac this morning, i checked that both Roon and Qobuz had synced recently, which they had, and then tried to play music. First try was a Playlist from Tidal which skipped about 5 songs and then gave the message “Too many failures. Stopping playback”. (Image attached - i did screen record it, but not sure how to get the video to you). Second try was a Playlist from Qobuz and it played no problem at all.
Not a computer expert, but if the system and software is exactly the same, but one stream plays and one stream doesn’t play, then you would assume that the problem may lay with the Stream Provider, in this case Tidal.
However, what is also concerning is the question as to why the Streaming is suddenly experiencing such issues. As you may be able to see, i have been music streaming over 20 hours a day since signing up with Roon until earlier this week. To suggest the VPN could be an issue doesn’t “cut the mustard” so to speak and to turn it off, would invalidate the reasons why I have been using it for the past 10 years or so. 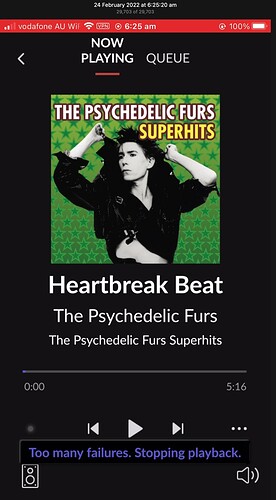