I spent all the day trying to debug a problem without success.
I have RoonCore running on an iMac 3.4 GHz i5 latest gen (2017). The core is wired via ethernet to a Devialet 250 ProExpert and to a Raspberry Pi modelB with Ropieee that is connected via USB to a Mytek Brooklyn that drives a pair of Audeze LCD3. Previously the Pi was a B+ but I changed due to the fact that the ethernet of the B+ is less efficient than the old model even if it is gigabit.
The Devialet works fine with Roon upsampling up to DSD 64 (max that Devialet can reach), either tracks on the library either tracks streamed by tidal.
The RPi/Mytek combo instead presents 2 kind of issues.
The first one is some occasional dropout that happen on all the tracks (library and Tidal), this I believe it is due to a limitation of the Raspberry Pi. To verify this I tested the RPi on the Devialet and I experienced the same kind of random dropouts that sound like sharp ticks or crack. This specific kind of noises don’t happen when connecting the Mytek directly to the computer. This seems to be a well documented limitation of the RPi so I have to live with it for the time being.
However he second problem is more peculiar. When I play music that is stored on the library and I upsample it, the RPi and Mytek don’t show any problem (apart the above mentioned dropouts that increase a bit in frequency according to the resolution). However if I play a song from Tidal and I upsample it to DSD (doesn’t matter if 64,128 or 256) I get a more frequent noises that sound very much like static.
I tried to connect the the Mytek to the RoonCore via USB and play up to 128 DSD DoP (due to the iMac limitation with the driver that don’t allow native DSD play) and the majority of the case sounds fine but sometimes, even if rarely with Tidal songs I get the exact same static noise.
I also did another test and I connected the Mytek via usb to a MacBook pro that was acting like a control of the core. The MacBook pro was connected to the Core via wifi 5G. In this case the static noise was present at the same level as on the RPi. I don’t understand why there is this difference between Tidal tracks and the one in the library. Internet connection is stable and good, in fact the Devialet doesn’t show any problem at 64 DSD.
I am not sure where the problem lies, if it is a Roon problem or a Mytek one, I logged this to Mytek support as well. I am planning to buy an Ultrarendu to substitute the RPi to solve the problem of the dropout but I wouldn’t want to find myself with the problem of the dropout fixed but still with the annoying static for Tidal tracks.
Thanks for help or suggestions
(Edit… added screenshot of the settings) 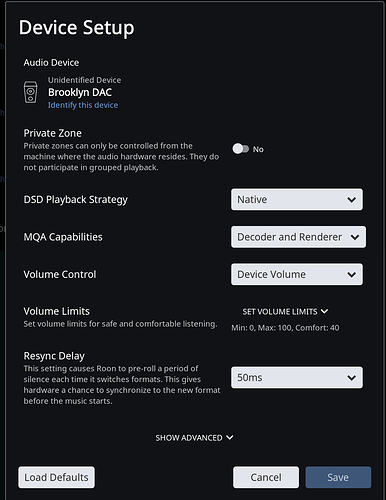 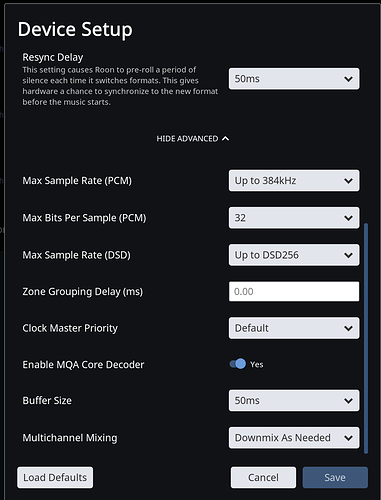 To me it looks like your Wifi network is being stressed. I have had similar issues with DSD over Wifi, Though your internet connection (WAN) to the outside world may be very stable, addition of more network traffic because of Tidal could be further stressing your wifi network vs local content.

This could definitively be a possibility for the test done with the laptop that was using wifi, but all the rest were done using cable Ethernet.
Thanks
M

I will definitely recommend hard-wired for DSD and above rates, or upgrade to a high performance wireless network such as Ubiquiti (though I have not used one myself for audio)

The problem is I cannot make this thing work properly even with ethernet.
BTW my system at home is Ubiquiti, and the WiFi access point is sitting 1 meter from the laptop. Anyway the laptop connection was just an attempt.
Currently I am trying to detail the different behaviours and save Roon log so that I can provide some data for @support in the hope they can shed some light.

Thanks for the detailed report. Let’s break this down…

In light of this, I’m going to enable diagnostics on your account to make sure we are getting the full picture here. The next time your core is active and connected to the internet, it should send a bundle of diagnostic logs to our support servers. I will let you know once those logs have been received.

Thanks @john
In regard to point one, I think you hit the nail on the head. I was able to repeat the behaviour.
In regard to point 2, can I ask you if you are connected via wifi with your MacBook and if you are having any click or dropout? I checked again my wireless diagnostic and the dropout I saw were happening on the 2.4G not on the 5G where the macBook is connected so I am a bit perplexed on why I was getting ticks.
Right now I have plugged the Mytek to the MacBook and I am playing DoP 128 from my library. So far, one song in and no clicks.

I ran the test using an 802.11n 5 GHz WiFi connection. 5 GHz WiFi is much preferred for high-bandwidth applications, as 2.4 GHz WiFi suffers from bandwidth as well as interference issues.

Hi @john That is what I am using. And just now got a little dropout

Edit:
Played a bit both library and tidal, dropouts here and there. You should have some data now