Hi @dylan, @noris,
maybe I’m writing to myself, but at least it is a documentation.

Here is some feedback from a trial I did with qobuz. I made a monthly contract with qobuz to make a comparison to Tidal. With Tidal I do not have one day without any skips.
Today (May, 4th 2021) I ran a test of about 12,5 hours with qobuz titles, albums (most in higher 24bit quality up to 192kHz) and within that timeframe I got NO skipped titles with Qobuz.
Are there different Qobuz server within Europe?
When do we get feedback, measurements from roon support?
Thanks.

Thanks for the updates here, and apologies for the delay while our team’s queue is longer than typical.

If you can reproduce this behavior when playing to System Output of a remote, can you make a note of the time that it happens, the track that it occurs with, and then share another set of logs? We’ll take a look at this instance and see if the behavior is any different without the endpoint in play.

Hi @dylan,
Thanks for giving a feedback.
I just have a problem to understand your request.
What do you mean by

playing to System Output of a remote

At April 27th I delivered log files with the time (before 10:30) of the skips.
The output was delivered to a Bluesound Node 2i.

Do you need now failures with the System Output (Core PC) and the Log files.
Did I understand this right?

Or do just wanted to know the title from April 27th for example?
Please give me a brief feedback?
Thanks.

A post was merged into an existing topic: Could you please read the feedback message from dylan

2 posts were split to a new topic: Could you please read the feedback message from dylan

Hello @danny,
Hello @dylan,
as promised I’ll try to deliver the expected facts - hopefully I’ll get everything together.

Test trial at May, 5th 2021 from 20:39 till 22:00 between the Tidal connect and the Roon App on the same computer with the same output (Optical System (Core PC) output directly to Devialet 200).
I’ve chosen London Grammar and the album " Californian Soil" from Tidal (not local streaming).
The album is shown as a 24bit, 44.1kHz, MQA 44.1 quality album.
Of course it is a green apple to red apple comparison

because I was not able to run both applications at the exactly same time. If you have a better suggestion, please don’t hesitate (one PC, no family account).
I looked at the Tidal server outages web page (Germany) and saw already issues reported from users. Thank god - this went on for the whole time.
First I tryed Roon App at 20:39 and it was unusable from my point of view.
Internet speed connection as stated from my cable provider 940Mbit/s to the PC or 1150 Mbit/s to the Fritzbox 6591 router (Standard setting - cannot switch cable router DNS because the router is from the cable company vodafone, but I used DNS 8.8.8.8 and 8.8.4.4 at the WIN 10 PC).

Roon test started at 20:39 o’clock and I got skips at 20:42 “Californian soil”, 20:45 “Lose your head” and 20:49 “How do I feel”.
Then I broke up, because I got already enough skips, interrupts and started the Tidal connect trial at 20:53 o’clock. Untill about 21:19 o’clock I ran the same album with the same quality from Tidal and what shall I say I got no skips at all at the whole test trial (8 titles).
At 21:20 I started the 2.test with the roon application. I got skips at 21:27 “All my love” and 21:31 “I need the night”.
At 21:40 o’clock I started again a Tidal connect trial and till 22:00 o’clock I got NO skips again (title 8-12) and a flawless music stream in the same quality.
No other programs besides the programs in the screenshots were active (besides some standard Windows backround programms). No special antivirus, I’ve never used VPN,…
Here are the screenshots I made: 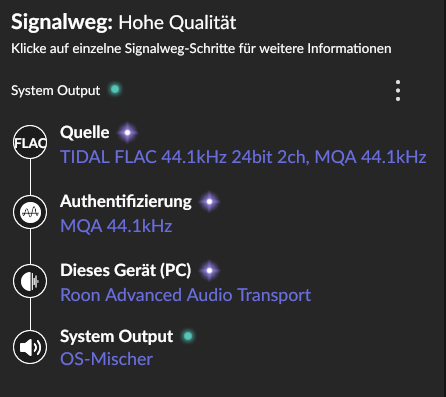 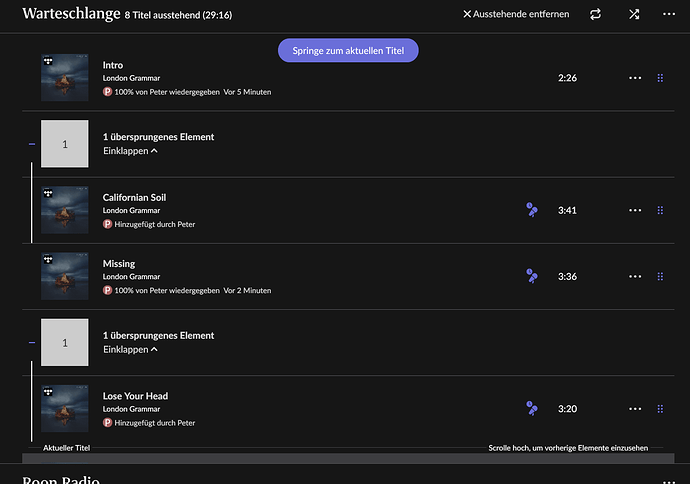 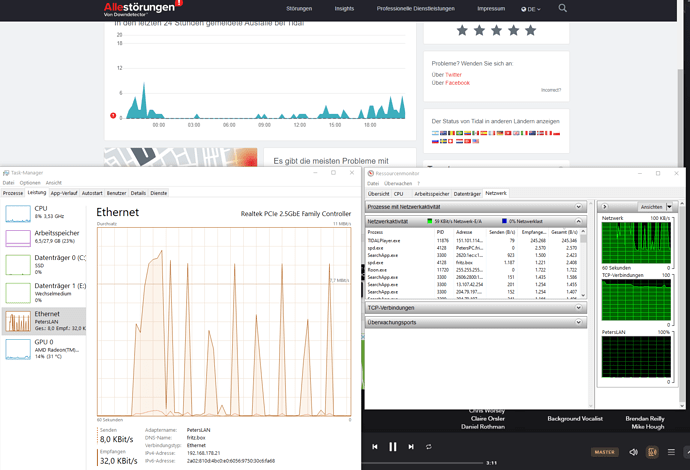 Screenshot 2021-05-05 21_18oclock Tidal connect1792×1223 233 KB
Screenshot during the Tidal connect test with some graphs.
Tidal connect peaks in network activity are by far lower than roon activity numbers.
The highest numbers I recognized have been 11Mbit/s in a peak and less than 9Mbit/s at most other peaks at that time. 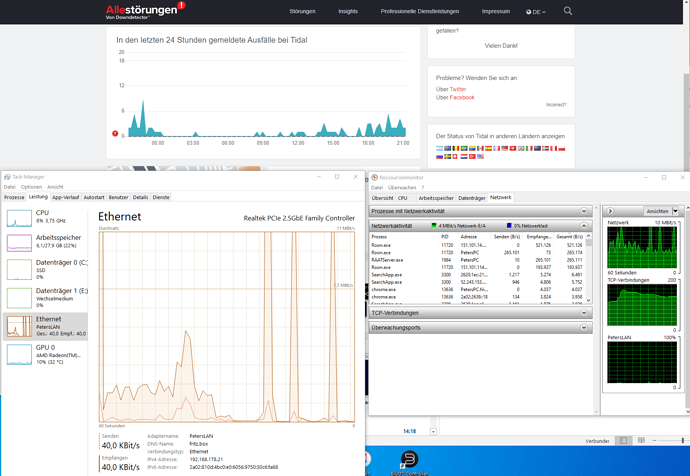 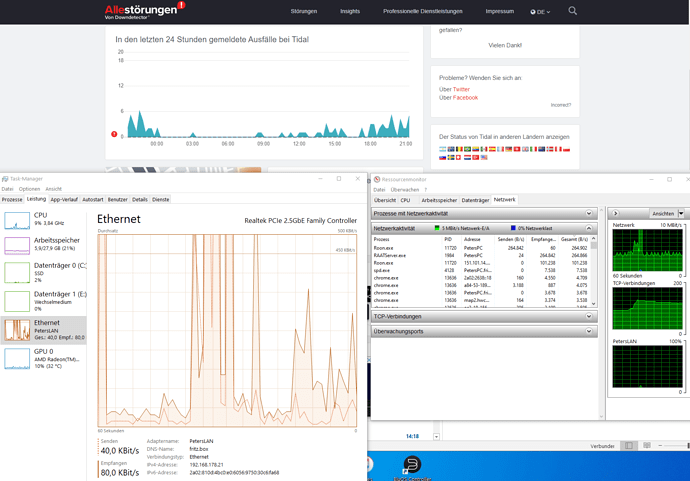 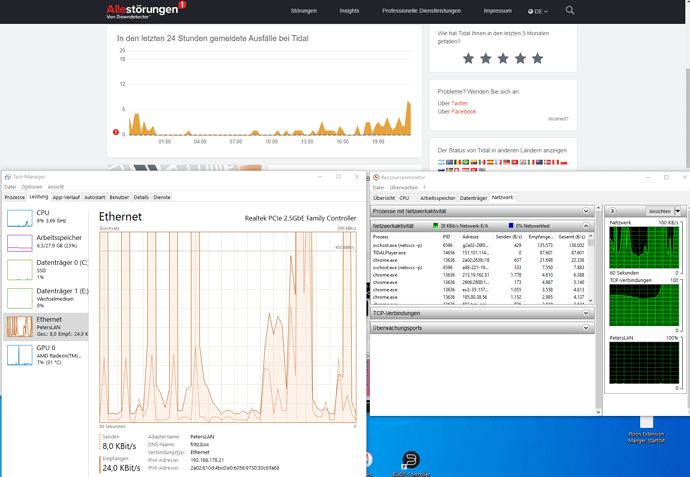 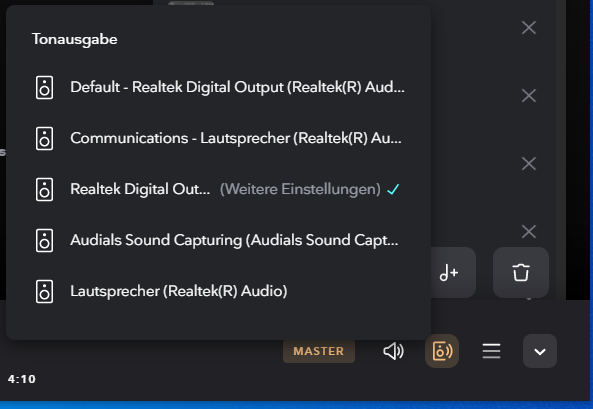 My own conclusion - Tidal connect used much lower network activity numbers and with that they can handle the Tidal server stability issues.
Roon takes much higher peaks and does not get the streaming quality they need.
Maybe I’m wrong, but so far my explanation.

Log file will follow. Did I forget something?
@danny, please give me a feedback about that test and the issues you see.

I’m just a stupid Engineer without a lot of detailed computer, network und server knowlege.
Thanks.

I saw the comments already at the log file.

Just to verify- when I’m talking about Tidal connect I mean this Tidal App: 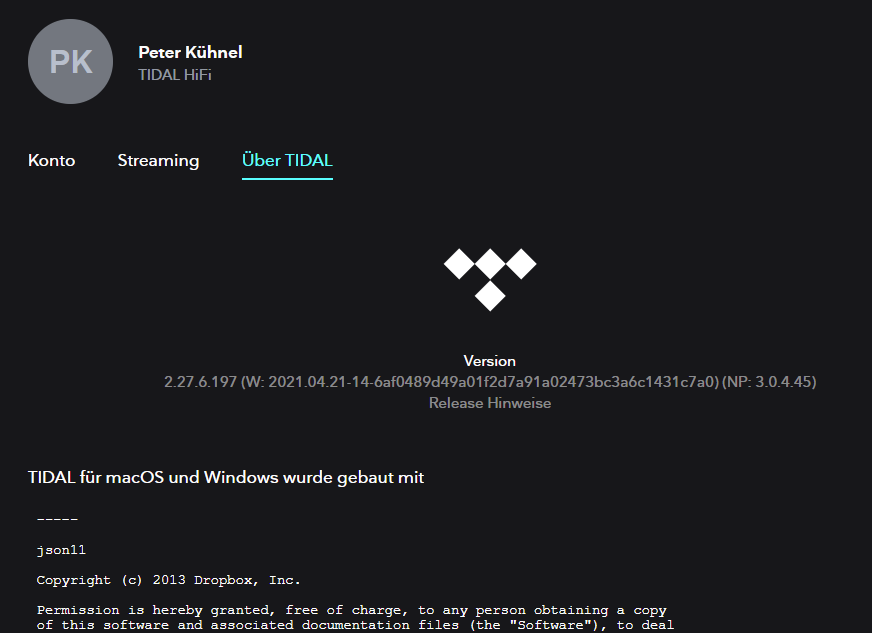 Hi @danny,
Hi @dylan,
Thanks to @wklie.
Just to straighten that out - I made all tests with the PC Tidal version - not with Tidal connect.
Because of the apples to apples comparison.

Seems to me less critical today - several hours with no issues. We’ll see.

Peter, this applies to you as well:

I have an idea… it may be easy to test. This is just an idea, and I’m just guessing here. Remember, 99+% of the TIDAL streams in Roon do not have issues with the connection. I’m guessing as to what impacts a handful of users. Here is my idea: Roon downloads the TIDAL track into memory for playback when you start playing the track. TIDAL on the other hand will stream with just a tiny buffer because it makes sense to minimize their outbound bandwidth costs for people who hit next or stop in the …

I could use some help with another test. Play in Roon and wait until you get a skip. When you skip, shut down your Roon Core. Like, kill the app/server completely. Restart the Roon Core. Play the exact same track that just skipped. Does it work? If it doesn’t, does it skip at the same point in the track?

Hi @danny ,
Thank you Danny. I’ll do so as promised.
Unfortunately, I’m on Mother’s day travel and far away from my music equipment. I’ll follow up on Monday and will do the test.
As far as I’ve seen so far it doesn’t depend on a title. I always tried to play skipped titles and a restart of the title always worked. What would you think if your car would work 99+%. As I stated, there were better let me call it Tidal-Roon days, but it happens more often.
And thank you verry much for following up with us.

You’ll get a feedback on Monday (maybe later this day).
Thanks.

Hi @danny, @dylan , @Francois_De_Heel.
here is the first feedback about the download from the 2.8GB file you offered.
These are the circumstances, Sunday, May 9th, 21 at about 22:00 o’clock:
roon was not running, Tidal server shows issues reported from other customers. If I try roon for Tidal streaming I get several skips.
Downloading the provided 2.8GB file always without any mistake,
Downloadtime 36s, 28s, 22s, 26s, 25s for 2.8GB at several trials - I guess this is not that bad.

I could use some help with another test. Play in Roon and wait until you get a skip. When you skip, shut down your Roon Core. Like, kill the app/server completely. Restart the Roon Core. Play the exact same track that just skipped. Does it work? If it doesn’t, does it skip at the same point in the track?

Hi @danny, @dylan, @Francois_De_Heel,
I started roon, ran it for just a few minutes, started an album from Vincent Weiss, “Vielleicht irgendwann” at 22:04 and it skipped right after a few seconds (1st title).
2nd skip at 22:09 - then I shut down roon and started roon again, I got no skips in the next 30 Minutes, but the reports from Tidal customers also have been dropped.
Please advice what to do next.

Hi @danny, @dylan @Francois_De_Heel,
another test run over a longer approx. 13h time period (May 9th/10th, 21):
Randomly titles from Qobuz and Tidal, some albums I’ve chosen and the result is
0 Stopps and skips from Qobuz.

3 Stopps and 20 skips from Tidal streaming during that time periode.

Same situation - Tidal Server outages and Tidal skips or stop seems to have a relationship, but not 100%.
I experienced a few little dropouts (3 or 4 for about 1s; always Tidal)
If there is anything I can help with - please let me know!
Even if we feel a little bit like beta testers - we wanna help. It’s a gorgeous Software.
Have a nice weekly start! And I cross my fingers for getting a solution for that mess.
There is a very little failure also in counting the percentages - if I switch and group zones the percentages drop even if the title played completely (I didn’t count that and to me it’s irrelevant).
Just as an information and the others who count “issues” from roon.
Thanks.

Hi @danny, @dylan, @rebeka,
I got the information about the Beta Update 785 and I installed it.

Right now I’m in a kind of endless loop and I always get the information for a newer version with a popup window and the normal system info window. 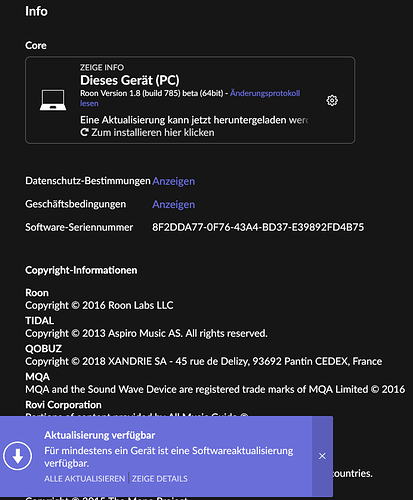 Screenshot 2021-05-14 785 beta694×839 75.8 KB
I played the installation game because I was not sure if it’s installed in the right way and it switches always back and forth between roon build 790 and 785 beta.
Rebooting the core PC and a new start of roon made no difference.
So I’m just ignoring the message for a new version and stick to 785 beta.
I already started a test run, deactivated Qobuz, switched the output to system output (to cut off any Bluesound influence) and will try it the TIDAL stream the whole night.
Thanks for participating that test version and I keep my fingers crossed.
You’ll get a feedback about my first observations.
Good night from Munich, Bavaria, Germany, the old world!

Wow @Peter_Kuehnel you did so much testing to try to figure this out! I’m having the same problem as you with both Qobuz and Tidal. And I have no problem with using Tidal Connect, either. After another morning of skips and stops with Roon, I signed up for a trial of Volumio. I installed Volumio on my raspberry pi endpoints with both Tidal and Qobuz integration. I used the Volumio software, not Roon, for the rest of the day and guess what, no skips nor stops! It’s the first time in many days now that I’ve experienced hassle-free streaming! It was wonderful! Volumio is not as pretty or refined as Roon, not even close. But it does the fundamental thing that any streaming app should do. With Roon, there’s an impending doom that the core will disconnect and the endpoint will stop playing. It’s giving me anxiety rather than an enjoyable time with my music! I’ve been a Roon subscriber for just 7 months, but I’ve had maybe a combined week of good even great experience. But problems always do come back! At this point all that is left for me to conclude is that it’s a problem with the Roon Core, their implementation, coding, or whatever it uses to communicate with the streaming services and within our networks. And I hope the support team has already reached the same conclusion rather than gaslighting us and our systems.