MQA Core Decoder has been doing this from the outset on any and all 44.1 kHz files.

You must have a 24 bit file in order to unfold.

He doesn’t mention unfolding a 16 bit here. Do you have any other documentation?

It’s possible that Roon just doesn’t have another flag available for valid 44.1kHz/16b MQA files so it shows its standard/existing flags. I believe Roon should be able to answer this.

Also, your comment on Donald Fagan Nightfly above is wrong. If the album was resampled to 24/48, it cannot be unfolded since, again, there is no high res data to unfold. It will simply be encoded as a 24 bit file at 48 kHz.

Also, your comment on Donald Fagan Nightfly above is wrong. If the album was resampled to 24/48, it cannot be unfolded since, again, there is no high res data to unfold. It will simply be encoded as a 24 bit file at 48 kHz.

Then there is another error in Roon. Can someone with a MQA DAC test ? 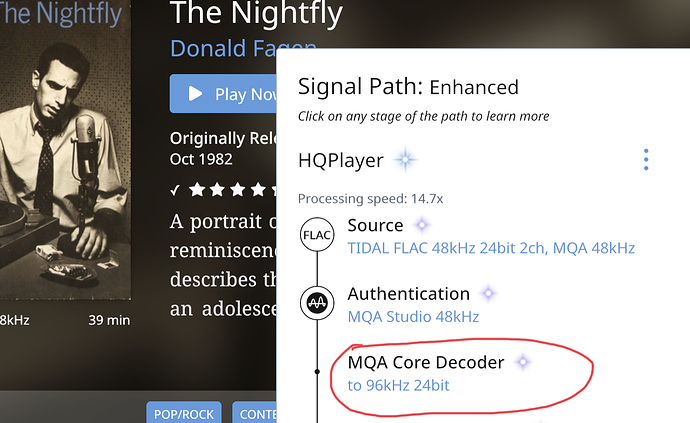 Yes, you keep finding the same flagging error. Nothing is being decoded, there isn’t anything to decode. Either Roon flagging is wrong or (conceivably I guess) something in the MQA bitstream is mis-set. Ask the Roon guys.

There are four different rates here, which causes no end of confusion: The MQA container rate (i.e. 44.1k or 48k) which is how the MQA gets to you. It has nothing to do with anything else and has no bearing on rendering rates. The transport rate of decoded MQA (“MQA Core”) from the MQA decoder to the rendering part of a DAC. This can be from Roon (or any other MQA decoder) to the DAC, or within the DAC itself. MQA Core is always 2x rate (88.2k or 96k) and has no bearing on rendering rates. T…

Donald Fagan Nightfly shows up as 48kHz MQA on an MQA DAC.

In the case of a true 44.1/48 k file (not meaning the Flac data rate), the Core shouldn’t be active, correct? The file should be sent directly to the renderer at 44.1k or 48 k, for subsequent upsampling within the DAC.

Have you another zone linked as you play this. I have seen this in my Meridian zone when I have my Pulse Flex and Meridian 210 zones linked.
I think the Roon unfolding takes over to support the flex and this is also repeated in the Meridian zone 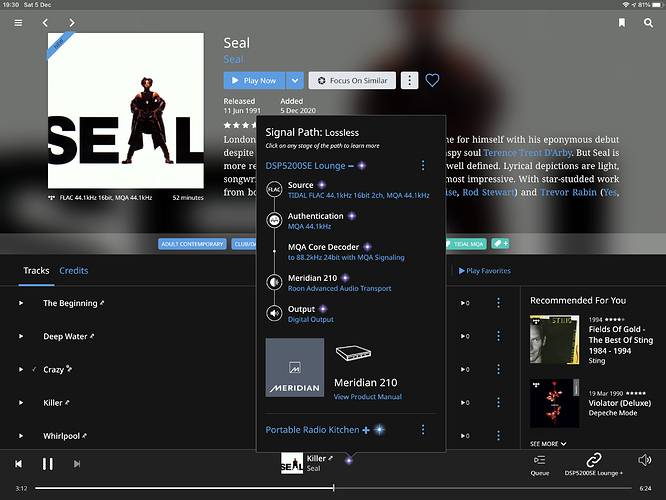 @joel
Does this apply to 16 bit MQA ?
Before my understanding was that MQA only could be unfolded if 24 bit.

However I accused Warner for doing upsampling of a original 16 bit recording. No 24 bit master exist. This has nothing to do with MQA. (But of cause Warner used this file to create a MQA. Maybe it unfold further in a DAC ?).

Also I’m only talking about Roon doing fist unfold. Whatever type of MQA file is offered. If I had a MQA DAC I could tested more if there was any difference between how Roon and a DAC handle 16 bit MQA.

play the accused track in Audirvana, still the same?

I don’t know. MQA is a complex technology with many options.

I don’t know. MQA is a complex technology with many options

Let me try to ask in a different way then. 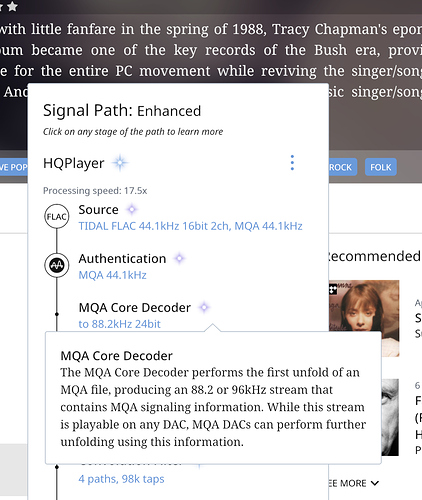 Yeah, this has puzzled me too. Haven’t gotten worried about it yet - but it does seem strange.

You keep using the term “unfolding.” That seems to be the hang up. For MQA, all unfolding is decoding, but not all decoding is unfolding. If not >48 kHz ORFS, then no ultrasonic encoding, nor unfolding.

Andrew, you persist… What @R1200CL and others are saying that these tracks are MQA authenticated at 44.1Khz or 48Khz, they should NOT be “unfolded/upsampled/expanded” to more than the authenticated sample rate.

As I suspected.
Would be interesting if anyone using Audirvana can report same issues. I would assume the error is on MQA (the company) side.

@mike
Maybe this is your department to take necessary actions ?

This is definitely regional , i still can’t see the Pink Floyd stuff that started this thread South Africa the poor relation as ever , I’d check on Qobuz but we don’t have it , or maybe Amazon HD if we had that as well 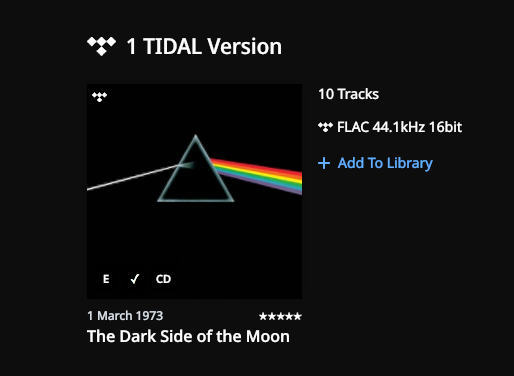 This is definitely regional

I think you’re adding some confusion here.
But it’s interesting to see you have the CD version available. I add a circle

where your version has CD written. An interesting detail.
However this album is also being decoded into 24/88.2 when playing as any probably 16 bit MQA album will be. (I assume you have master available and hooked of in your Tidal subscription). 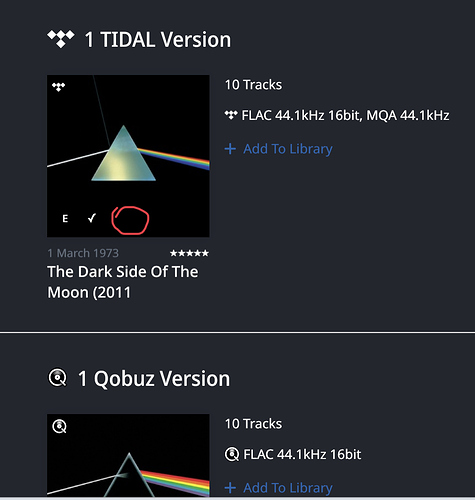