We’re aware of the Seven Days Walking (Day 6) issue and are working with TIDAL to resolve. Apologies for the inconvenience.

I am having a similar issue with some new releases in your qobuz. The latest album from Nirvana, “Live and Loud”, as well as the new Lana Del Rey album, “F’ing Norman Rockwell”, appear in my qobuz app and my favorites on my qobuz app, but are not available in Roon in any fashion that I can find. There maybe other new releases this week that also haven’t come over, but it seems like most everything else that I favorited in the Qobuz app came over to roon but those two albums didn’t and I can’t find them in a roon either. Also the issue of qobuz titles that I favorite in roon do not translate back as favorites in my qobuz app…that is a diff and persistent problem!
Thanks
Doug

Hi, same problem today searching a singer which is on Tidal, but I get no results here.

5 posts were split to a new topic: Issue with Baby Driver album from TIDAL

still an issue for Impossible - Nothing but thieves

Hi there, I am having the same issue with a number of tracks/albums. For example, the song ‘Stay’ by Lisa Loeb (on the album ‘Tails’) is showing up as ‘Unavailable’ despite being playable directly from the TIDAL app – screenshot attached.

I have tried logging out and logging back in of TIDAL, and I have also cleared Roon’s cache from the Library folder on MacOS as a test… still no luck.

Having the same problem. I really like roon (im in trial mode now and set to purchase the lifetime plan but now i think ill hold off until this gets fixed)

This weekend I’ve had some problems with this also. 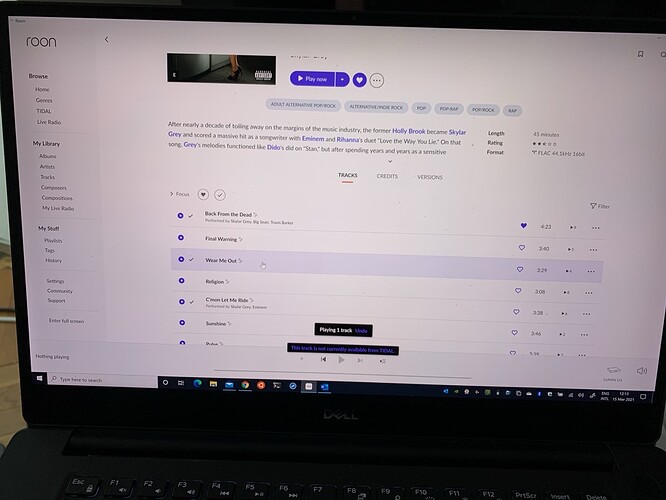 Also having this issue…a real bummer!

Yes, it seems that it works for several days after this fix. But now problem returns.

Yea, unfortunately the problem has returned for me also.

What is wrong with Roon 1.8? Since the changeover the problems have accumulate!

For a few days the “Tidal-Skipping-Problem” was gone to come back now. When I try to play music from several Tidal albums that I added to my libary Roon says that “This track is not currently available from Tidal” and sometimes “Too many failures. Stopping playback”. Not uncommon the supposedly unavailable songs change from one attempt to another. In the Tidal-App all songs are available without problems.

Why does the technical board simply not to grips with this problem?

Same problem here, and its escalated lately. I’m only one month in on my membership, and during the trial it worked flawless, now Roon can skip 50 % of a tidal playlist with songs that works in tidal app. A reboot of the core used to fix it for a couple of hours, but not anymore.

I think Tidal changed something in their API, and that’s broken previously working Roon code. Also (maybe just a coincidence) this problem arose when Tidal was bought by Square.

And I want to draw your attention that original problem of this thread (tracks in albums marked as “Unavailable”) and tracks skipping (error message while playing “The track is not currently available from TIDAL”) are two different problems! I’m talking only about the last one, like everyone else in this thread over the past few days, I think.

Yes - unfortunately this issue here is again a problem (The track is not currently available from TIDAL):

Tidal tracks skipping: "The track is not currently available from TIDAL" Support

Core Machine (Operating system/System info/Roon build number) Mac mini MD388, macOS Catalina, Roon 1.8 (build 764) Network Details (Including networking gear model/manufacturer and if on WiFi/Ethernet) Ethernet 1 Gb/s, internet connection 300 Mb/s Description Of Issue For several tracks from each album from Tidal, which I’m trying to play, I get “The track is not currently available from TIDAL” error. Even for tracks that I’ve played an hour ago without any problems. But I can play all thes…

According to the logs it seems to be the same issue:

So maybe @support can again have a look? Thanks a lot!

Same issue here. None of the tracks I selected from Tidal can be played through Roon, as they all give the message:
“This track is not currently available from Tidal”
“Too many failures. Stopping playback”
I’m using ROCK version 1.0 (build 227) on an Intel NUC and ROON 1.8.00764 on an iPad. Music is played through a NAIM Uniti Atom.
I’ve rebooted the NUC, restarted Roon Server Software, reinstalled the OS and resetted the Roon Database (and reloaded a copy of ffmpeg-file), all to no avail.
Any clues on how to solve this?