You must use the TIDAL app on your Mac Mini and not use TIDAL Connect.

In your example, the Roon Core is subject to all the stuff installed on your Mac, but the TIDAL Connect gets to skip anything you’ve got on the Mac.

My suspicion is that your Mac is the one with the problem. One half of your test skips the Mac!

you don’t need to do it at the same time. that will never work because of how tidal sets it’s rules on the server side.

Every time we actually dig into this, it’s always a misconfigured DNS, or bad router, or funny VPN/VLAN/setup issue. Always. It’s never once been an actionable change on our end.

So it’s one of those 3 things. And in my case I don’t use VPN and I used 2 different routers in the past with same issues in Roon. Which leaves me with the misconfigured DNS. I use 8.8.8.8 for DNS. What is the Roon recommendation for DNS server ? How can I check if my DNS is misconfigured?

routers are just a small part of the network.

are you able to play in the TIDAL app on the same machine to the same outputs?

Also, I’d like to point out that while your symptoms are similar (as is the error in the log) to @Francois_De_Heel 's case, it may or may not be the same issue. I’d like to focus on individuals as unique cases, and stop tying them together. It’s confusing for us. Please try to resist the urge to do this.

In your log, it shows that the TIDAL stream is failing to load… doing TIDAL app test is a good start, especially since you already playing to the output on your Mac. You already have success using Audirvana on that Mac, it’s a good test.

Both in Roon & Tidal streaming quality is set to Master.

I launched a Tidal playlist in Roon. From the 22 tracks that were played on May 6 from ca. 7:00 am until 8:33 am local time, there were 4 tracks that skipped midway to the next.

The first track played of the 22: “A Beautiful Woman” by Angel Deradoorian

The last track played of the 22: “Slow Decline” by Elsiane

On May 6 at 9:44 am local time, I launched the same playlist beginning with the same “A Beautiful Woman” in the Tidal app on the same Macmini. I diligently listened for skips. There were none.

On May 6 at 13:17 I stopped Tidal playback after “Mosquito” by Yeah Yeah Yeah and immediately returned to Roon. I played the same 25 Tidal tracks, beginning with “Friend Crush”. This time, in Roon, of the 25 tracks played, 0 skipped midway.

I let Roon continue playing. At 15:35 I started a new playlist in Roon (first track: “Anemone” by The Brian Jonestown Massacre). 3 tracks later:

I restarted the Tidal app and played the same 32 tracks starting from “Anemone” by Brian Jonestown Massacre and ending with “Melting Pot” by Booker T. & the MG’s. I diligently listened for skips. There were none.

I made a zip file of the Tidal logs. If you want them, let me know.

Screenshot of Tidal playing (made with my phone, I have no apps installed on my Macmini, except Roon and – temporarily - Tidal). 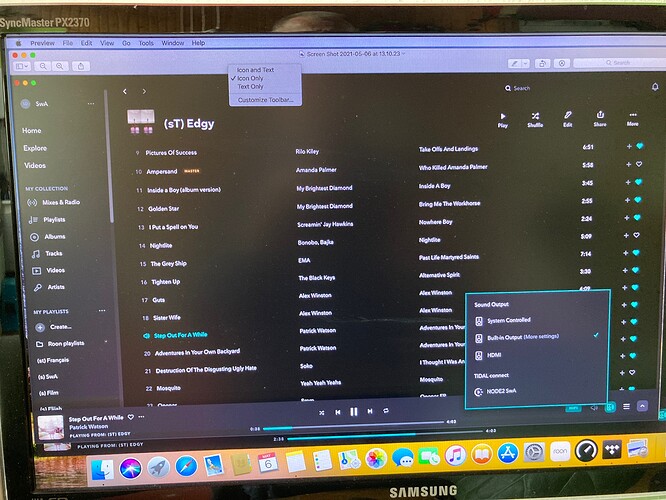 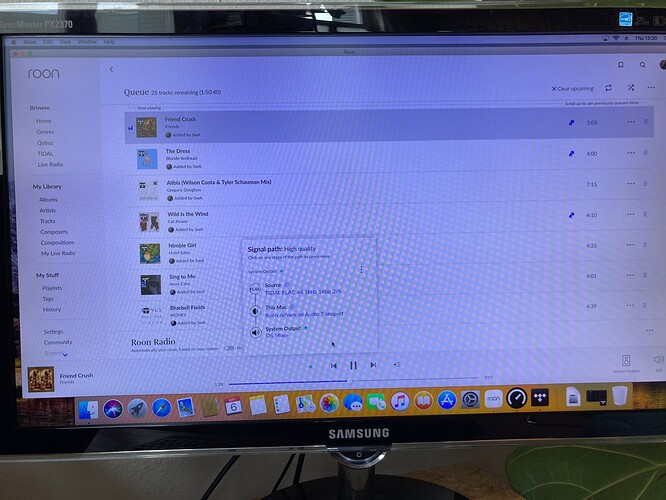 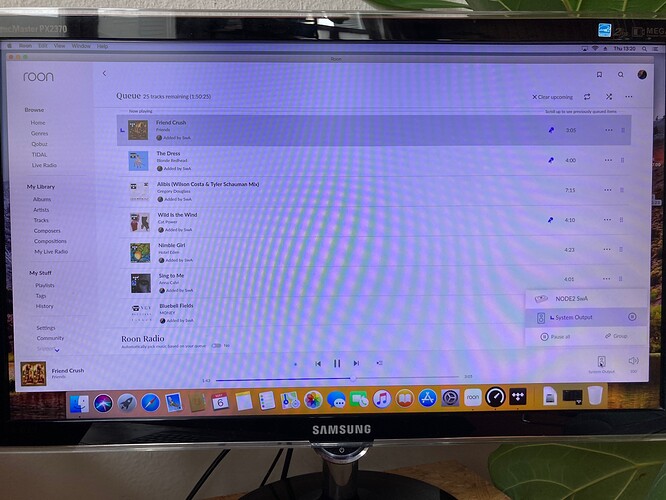 I have an idea… it may be easy to test. This is just an idea, and I’m just guessing here. Remember, 99+% of the TIDAL streams in Roon do not have issues with the connection. I’m guessing as to what impacts a handful of users.

Here is my idea:

Roon downloads the TIDAL track into memory for playback when you start playing the track. TIDAL on the other hand will stream with just a tiny buffer because it makes sense to minimize their outbound bandwidth costs for people who hit next or stop in the middle of a track. No point in paying for bandwidth to stream a song you don’t play. This is a side effect of outbound traffic having a cost to them.

Early on, we found that downloading the track in its entirety helps those who have poor or intermittent internet connectivity. The results of doing this were clear, as we saw reliability go up and many users reported the opposite of what you are experiencing: they had unreliable TIDAL app streaming but solid TIDAL streaming in Roon. We all rejoiced!

I’m wondering if this download of the track is causing your ISP or router to behave badly. The test would be to see if you can reliability download large files from TIDAL. It’s hard to do this from TIDAL without writing a custom program, but we can try downloading large files from elsewhere on the internet, and if that fails, we will know that this could be the issue. The answer would be to provide a way for you to turn off this behavior.

When you are having these issues in Roon, using the same machine, using the stock OS web browser (Safari or Edge), can you attempt to download this 2.8gb file:

It’s an Ubuntu operating system image, and you can delete it after the fact, but I’m curious if you manage to download a full 2,818,738,176 bytes without issues.

I know it’s a bit annoying of a test, but it’ll help give us data.

A post was merged into an existing topic: Trouble with TIDAL playback [resolved - VPN was interfering]

I just downloaded the file on the Macmini using Safari. It worked. In fact, I downloaded it, deleted it, then downloaded it again to time it. The second time it took 2 minutes and 9 seconds. I think the first time was faster.
Does this help? Does it learn us anything that is actionable?

This can’t be our downloading… look at this:

The second time it took 2 minutes and 9 seconds

This means your system shouldn’t have been anywhere near downloading anything when this skip happened.

I did notice something else in your logs:

38.5 seconds over an hour of clock drift! That’s a really bad clock.

We are digging deeper… there is something going on here.

I could use some help with another test.

Does it work? If it doesn’t, does it skip at the same point in the track?

Haha. I’ll kill my Macmini as soon as I notice a skip. I’ll keep you posted.

You don’t need to reboot the system, just restart the Roon Core. There is a cache that will be lost in the restart, and that’s the effect I’m trying to get.

Okay, will do. Have a nice weekend!

This evening, May 7, at 23:34 (or 23:33) local time, “Destiny” by Zero 7 skipped after 55%. I shut down Roon on my Macmini, logged out and logged back in. I restarted the same track. It played without interruption or skipping. I think it would have also played without skipping without restarting my Roon core (by adding as next to the queue), but I did not test that. Should I, the next time?

Extra test. “Regular Pleasures” by Patricia Barber skipped (completely - or almost) on May 8 at approximately 00:27(this was actually a Qobuz track, I think). I put it next in the queue. I skipped the track that was playing in the mean time (Melanie di Biassio). “Regular Pleasures” played perfectly without any interruption or skipping.

Thanks, that was helpful.

We use an API of TIDAL’s that gives us access to the FLAC files, but their app uses a different mechanism we don’t have access to. The FLACs are served up via a CDN and the CDN is dropping the connection on us randomly. It’s unclear why. Your tests shows that aggressive retries will indeed allow us to recover.

Let us play with this more and we’ll be back for more info if we need it. We’ll also talk to TIDAL to see what’s up with this mechanism and the CDN.

2 posts were split to a new topic: Slowness sometimes when playing tidal tracks

That’s it for this part In computing, an application programming interface (API) is an interface that defines interactions between multiple software applications or mixed hardware-software intermediaries. It defines the kinds of calls or requests that can be made, how to make them, the data formats that should be used, the conventions to follow, etc. It can also provide extension mechanisms so that users can extend existing functionality in various ways and to varying degrees. An API can be entirely custom, speci Refer...

InternetServiceProvider is like Telekom or Vodafone in Germany. The guys to deliver your internet at home.

A content delivery network, or content distribution network (CDN), is a geographically distributed network of proxy servers and their data centers. The goal is to provide high availability and performance by distributing the service spatially relative to end users. CDNs came into existence in the late 1990s as a means for alleviating the performance bottlenecks of the Internet, even as the Internet was starting to become a mission-critical medium for people and enterprises. Since then, CDNs CDNs ...