Over the last few days I noticed a worrisome trend: TIDAL tracks over 7:00 in duration are suddenly becoming unavailable: 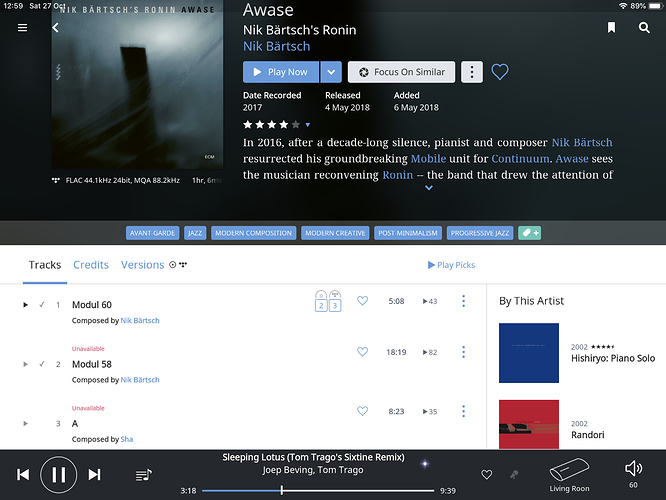 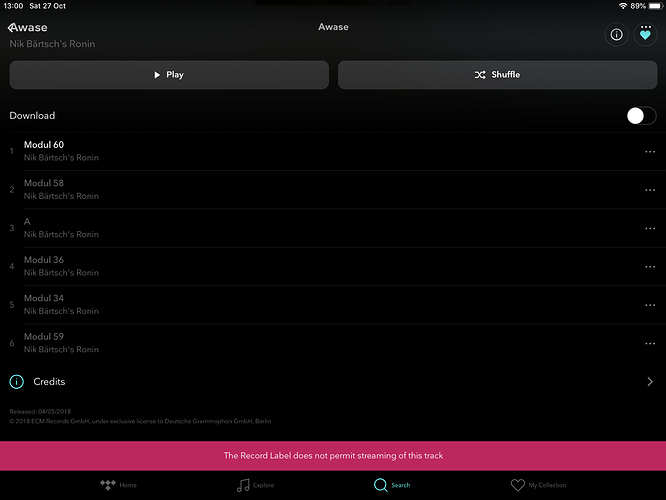 I have not been able to find rhyme or reason, but all of my favs suddenly have albums with one or more tracks unavailable for playback. It’s a mess.

Temporary fluke or a case of ‘fun while it lasted’?

EDIT: Same thing with Spotity. Qobuz as of yet appears to be unaffected.

Just checked that album in Apple Music (US) and all tracks appear to be available to stream.

Also appear to be available in Roon (Tidal) for me.

Likely they have lost the rights to stream them in your country. Have you checked in the Tidal app to see it’s the same?

Qobuz as of yet appears to be unaffected.

It was not so long ago that all ECM files in Qobuz were not released for streaming. There’s a reason why I buy the albums I like. ECM and stremaing, that has always been some heckmeck (unnecessary circumstances, fuss)

Have you checked in the Tidal app to see it’s the same?

There’s a screencap of the Tidal app in my post…

Agreed that this has more likely to do with ECM than with TIDAL. I wonder how this is going to pan out.

There’s no consistency though. Some albums have only one track unavailable, some have almost the whole album unavailable.

I suspect there’s “bait and switch” going on. ECM have always been reluctant to allow streaming. It’'s a nudge to buy the CD having got used to it in your library etc.

I have always had the impression that ECM hated the streaming business model from the ground up, and that they are reluctant to submit to it.

I wonder how this is going to pan out.

Maybe they just make temporary contracts to renegotiate after a certain time.

I suspect there’s “bait and switch” going on.

That’s exactly how it was about half a year ago with Qobuz. One piece as bait … I think that even now you can not rely on it stays that way that is is now.

The problem is that as a jazz lover, you have no choice. The artists are excellent and the recordings are great. And considering how much money I have already invested in any toy, then this investment is at least well spent. 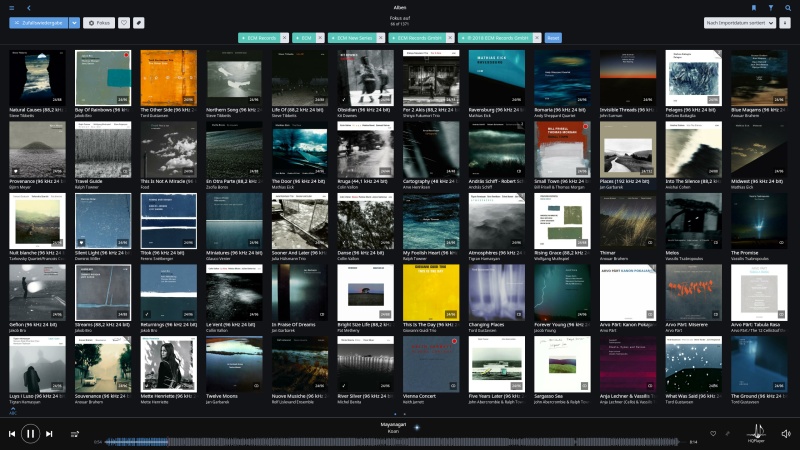 I’d noticed this in my Tidal ECM playlists and it looks like it’s only tracks that are longer than 7:00 minutes that are becoming unavailable. So some albums unaffected, some affected a lot like the OP’s Awase.

I appears I was wrong about this being limited to ECM: a large chunck of my library has become unusable. @Calum_Scott seems to be on to something with the 7:00 mark: 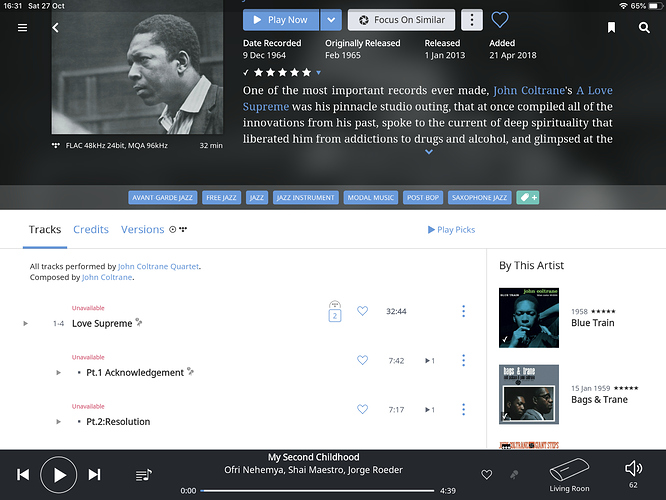 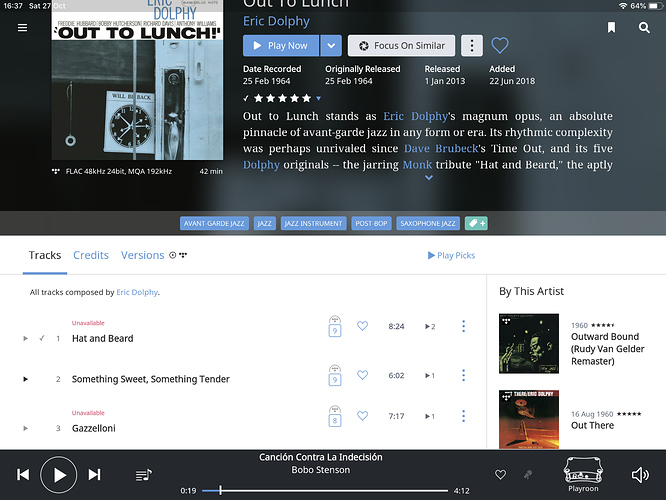 I think I am seeing this a bit more often with MQA albums, but not always. Creation by Keith Jarrett is almost completely unavailable in MQA, but the regular TIDAL FLAC version shows full availability. Awase on the other hand is equally unavailable in MQA and regular FLAC.

I hope this is a fluke, but right now it’s a mess. 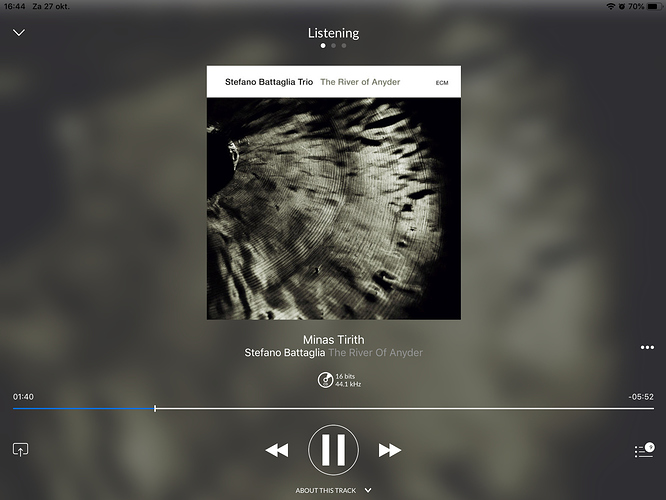 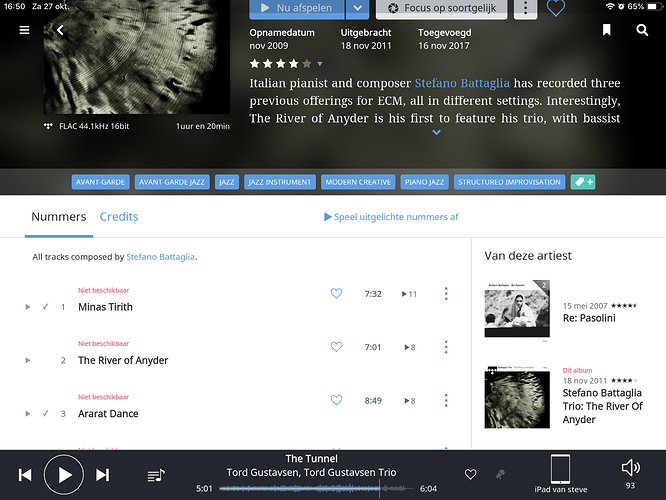 I still have my most coveted TIDAL additions available locally, but recently I have let things lapse for a bit. Time to catch up – ‘scuse me while I go music shopping!

I have had this problem as well. After logging out of Tidal and login again the problem was solved.

Just did. No dice.

Same here, logging out and back in did nothing for me.
Strangely, all tracks of Anouar Brahem’s The Astounding Eyes of Rita are still there, but the longer tracks on his other albums (that I checked) are gone.
Worst for me (of what I’ve found so far), the MQA version of Coltrane’s A Love Supreme is gone.

Not seeing any problems with Coltrane’s A Love Supreme MQA Tidal release in the US. 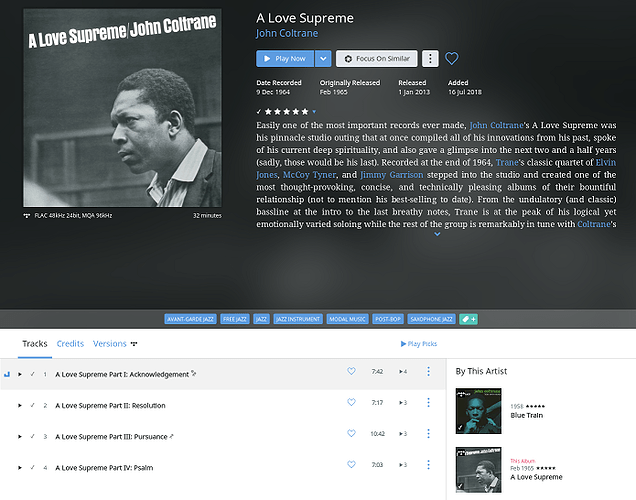 Listening to it now and all tracks available. Don’t know if this is just a regional Tidal issue affecting some countries or if it’s something that has just not made it to the US yet.

If it is regional, it has surfaced in the UK, Belgium and the Netherlands – going by this thread.

Enjoy your Coltrane – I’ll dust off my local files for now. 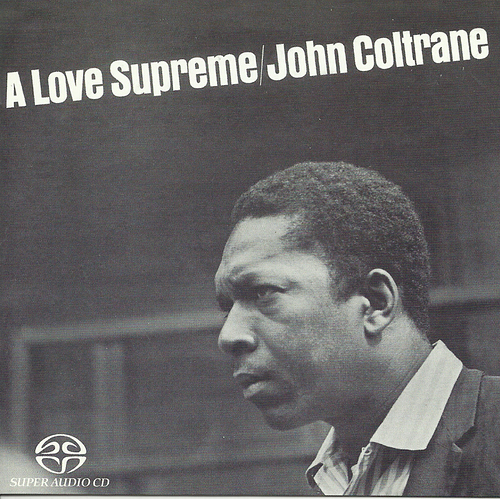