I’m also on QNAP. For me CAPS-LOCK did the trick.

I’ve now had this issue two days in a row. In both cases I’ve received Tidal login errors when starting the Roon remote.

The first time around I stopped RoonServer, removed the RoonServer/Cache directory, and restarted. I was able to login to Tidal normally at that point and it continued to work all day.

I’ve never before had any issues with the Tidal integration in Roon and this behavior popped up since upgrading to build 165.

My core is RoonServer running on Ubuntu Server 16.04.1. I run a nightly Roon backup script which shuts down RoonServer and then backs up the database directory. In looking at the logs from the restart of RoonServer after the backup the following error is present:

There are no Tidal errors in the prior logfile immediately before RoonServer was stopped for backup.

I have no issues with Tidal via the web or ipad app. Also no issue on the audio devices which use the same token-based authentication method as Roon.

I haven’t rebooted the actual server, but that really shouldn’t be necessary on linux. I did try the all caps username, but that didn’t make a difference.

As an aside, after getting the login to work I tried stopping and re-starting RoonServer. Upon re-start I was presented with the same Tidal login error on the remote.

Stopped RoonServer again, removed the Cache directory, and started RoonServer. Everything is back to normal (I didn’t have to re-login to Tidal).

Hi @AMP ----- Thank you for the follow up and my apologies for any confusion on my part. In your last post you mentioned:

“Stopped RoonServer again, removed the Cache directory, and started RoonServer. Everything is back to normal (I didn’t have to re-login to Tidal).”

Having things been stable or has this been temporary?

Having things been stable or has this been temporary?

Intermittent is the best way to describe it. I checked the setup at the shop this morning and everything was fine. The backup ran overnight so RoonServer was stopped and restarted, but there were no Tidal login errors. I’ve stopped and started the server several times and haven’t had a Tidal issue.

At home I have a Synology running as a core that shares the same authorization as the setup at work. When I fired up Roon here this morning I got the typical screen saying that I had exceeded my number of authorizations. This is typical as I deauthorize the core at work when I’m using Roon at home. In this case, though, it said I had a total of “0” authorizations on my account (this number is usually “1”). The only way to clear the issue was to stop the RoonServer package on the Synology and re-start it.

This allowed me to deauthorize the work Core and connect to the one at home. Then the Tidal login error popped up again. Was able to clear it by deleting the Cache directory on the Core.

What’s strange here is that the authorize / deauthorize glitch (reporting 0 licenses on my account) has popped up a couple of times since 165 was released. Additionally when I deauthorize one Core the other continues to function for a very long time. I’ve even been able to re-start the deauthorized core and am still able to reconnect to it, browse, and play. In this case the Core at work has been deauthorized for about 15 minutes and it’s still functioning (as is the authorized core at home). Strange.

Something strange happened with 165…

Well it continues to be predictably unpredictable…

The home core had the authorization overnight and both systems went through a shutdown / backup / restart operation during that time. No issues with the home core this morning (Tidal was authorized and working fine).

Hi @AMP ---- Thank you for the feedback! I would like to grab some logs from you and will contacting you via PM with instructions shortly.

I’m getting the ‘Tidal Login Failed’ as well. When I try to re-login then from Services I get:

I can access Tidal OK from Firefox with same credentials.

Stopping/restarting Roon had no effect, but rebooting the server cleared the problem and Tidal login worked OK.

Hi @Tony_Devitt ------ Thank you for the feedback. Have you tried clearing your TIDAL cache yet?

Also I cannot retrieve my roon account information, it says that an unexpected error has occurred. wish I knew how to go back to previous release…a

Hi @Go_Ga ---- Thanks for chiming in here. As I have asked other user in this thread can you please confirm/verify the following data gathering information and troubleshooting steps:

Rebooted the core server 2 times and everything is back to normal. Thanks. 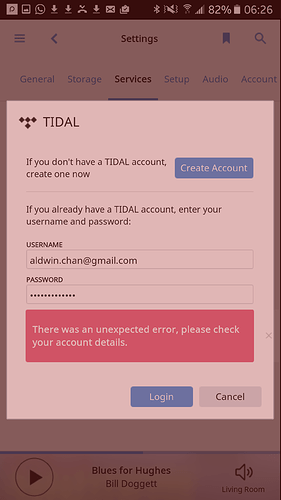 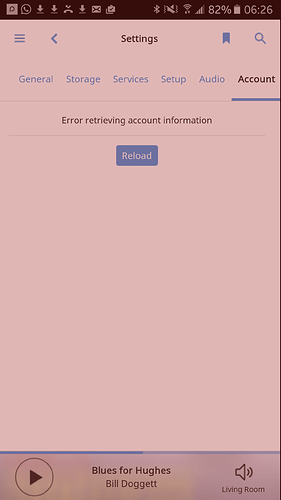 when it was working up until tidal login problems.

i am having login problems with the new updated roon remote in my android both my android and my wifes one can not access our tidal account. all my other devices assoc with tidal works fine.

it seems the roon remote does not recgonize it is connected to the internet as the roon account tab also has problems reliading. here’s some screenshots.

tried restarting roon server on my nas and remapping my network with no solutions. Amy suggestions?

Hi @Aldwin_Chan ---- Thanks for the report. I merged your thread with this in order to keep this issue isolated to one place on community. As I have asked other user in this thread can you please confirm/verify the following data gathering information and troubleshooting steps:

Try typing your login name (email address) in all CAPITALS.
That solved my issues… There are a few other threads btw regarding this issue.

For everyone experiencing this issue, are any of you not running your Core on Linux?

After the recent Roon app update on my iPad, I also received an email on update in Tidal terms. I was kicked out of Tidal in the Roon app and cannot log back in even though I have no problem logging into the Tidal app on the IPad. Have logged a support request to Tidal but I’m not sure if this is a Roon app issue or a Tidal issue.

Have tried restarting roon server with no improvements in Tidal working.

Just an update on my specs, I have a QNAP 251+ nas 4TB raid 1 running roon server build 165 that streams my music to a DAC, all flac/dsd and nas library works since the update on Nov 21 have had no issues except for the tidal login problem. No issues with Tidal’s own apps working in my network.

My controllers are 2 android associated roon remotes and a MacOSx Yosemite iMac, all 3 have roon remote tidal login issues.

I too had the same issues after agreeing to an update in Tidal terms, coincidence or something on Tidal’s end?

Roon team, hope you guys have a solution!

My system has recently developed problems connecting to Tidal and retrieving Roon account information, don’t know if the two problems are related. Can still login to both Tidal and Roon accounts from Chrome and/or IOS. Tried reentering Tidal account info within Roon but generates an error. Some days can connect to Tidal from Roon, other days no.