To Bridge, Or Not To Bridge - Zen Stream vs Denafrips Iris

I have Roon and HQPlayer on a 2020 Mac Mini. This currently connects to a Marantz SACD 30n via a MircroRendu 1.4 (w/ Sbooster) by USB.

That’s the same Tidal account, and the same DAC, which sounds much better via a direct ethernet connection than through the Roon/ Mac rig.

This has me wondering. Is the sound difference due to the inherent low flying nature of the Mac Mini? Or does it to do with the MircroRendu’s use of USB?

I have two remedies simmering in my head.

I’m hoping to find a way for the Roon rig to sound on the same level as Tidal directly connected to the Marantz as controlling Tidal via HEOS is a woeful experience compared to Roon. But I’m not clear what my weak link is.

Open to all ideas. Thanks.

I can’t talk to your DAC/Amp, but I do have a Zen Stream connected to two outputs via SPDIF and USB.
The SPDIF is limited to 24/192 and that is not an issue for me and I have found it excellent.

My two recommendations for the Stream are Roon and HQP and in my experience it sounds excellent through both. Tidal connect also sounds great, but other streaming services are less reliable.

Thanks for the feedback. One appeared on the Amazon iFi store, was able to order the Zen Stream. They are rather hard to find in this brave new world of ours. Look forward to auditioning it.

The rub on the Iris is no return policy. I’m hoping eliminating USB does the trick.

Here is to hoping you enjoy them.
I have never had a problem with SPDIF or USB audio out, but my USB out goes to a Zen DAC so that might change things. The usb has noise suppression from the other ifi products in there as well, so it should be worth trying it both ways.
I will be interested in your feedback on the Iris as I have heard a lot of good things about it as well as the Ares II

It is all in the implementation.

USB out from the Zen Stream sounds better to me than the SPIDF into a Schiit Bifrost 2.

It was also a significant step up from a Pi or a NUC direct.

I agree with Bevan here, but I have heard enough people saying the same that it must come down to the DAC/Amp in use.

I think implementation of both the streamer and the DAC makes a difference.

I’m obviously don’t definitively know. Though supposedly the inventor of USB has said that USB is ill suited for audio.

I can say that in my personal experience with various DACs (DirectStream, Border Patrol, and now Marantz SACD 30n), that not using USB has been beneficial. And not using a computer even more beneficial.

But that’s just my wee ecosystem and hardly conclusive beyond that.

I have a lifetime Roon license, and prefer Roon for library management over the Stone Age Marantz HEOS, but I struggle with the sound quality now that I know how much better it can be.

I’m hoping the Zen Stream will help. The Audio Excellence guys on YouTube say it’s very competitive with any streamer under $2000.

TAS this month has an article on the merits of the Sonore Optical Module and speaks highly of it to cleanup Ethernet. And it’s very affordable.

Remember that everyone who puts forth a strong opinion on USB (or any other technology) likely either has a competing technology that they support, or they use USB and support it, or they have read something written by an “expert” they like and are just quoting them–often they are subconsciously defending an expensive purchase they have already made.

That said, the design requirement is to deliver digital data without corruption or degradation to the DAC. While I am not an expert on the subject, I have found that USB is delivering lossless and properly timed data to my DAC. I’m not married to any technology, and if I do find something better I won’t be reluctant to change.

I think that there are much better places to look for degradation or opportunities for improvement, generally in the analog portions of the system.

Remember that everyone who puts forth a strong opinion on USB (or any other technology) likely either has a competing technology that they support, or they use USB and support it, or they have read something written by an “expert” they like and are just quoting them–often they are subconsciously defending an expensive purchase they have already made.

Could be. Or could be USB is flawed. I can only say that in my rig, getting rid of USB has always helped. But that’s limited to my specific equipment and cannot be, nor is, a sweeping indictment of USB.

Well the good thing with the Zen Stream is that it does have SPDIF as well, which will give you that option anyway.
There is a very nice USB that I have found very clean and quiet, so it will at least give you 2 options for output so your Amplifier or a DAC to your Amplifier.

I went from Mac + usb to zen stream + spdif into a Hegel amp and the improvement in sound quality was dramatic.

One more thing to think about, you eliminated Roon from your equation and it sounded better.
I’ve also experienced this in my system. (Innuos Zen Mini3 + Naim SuperUniti + kudos X2) Even though Roon is a great way to manage music, I find using the Innuos app a lift in sound quality. Everything else being equal.

I am using HQPlayer to handle the sound for Roon. In theory, HQP is excellent on the sonic front.

This YouTube video from Golden Sound further pushed me to try the Zen Stream. At around 12 minutes he talks about the Pi2AES sounding better than the Denafrips Hermès DDC at 1/8 the price. His theory is the absence of USB in the Pi2AES being the reason. He explains it very thoroughly with measurements. Granted he’s talking about I2S output instead of SPDIF, but it was enough to motivate the Zen Stream audition. That and Audio Excellence saying the Zen Stream is at least as good as the Innous Zen Mini. 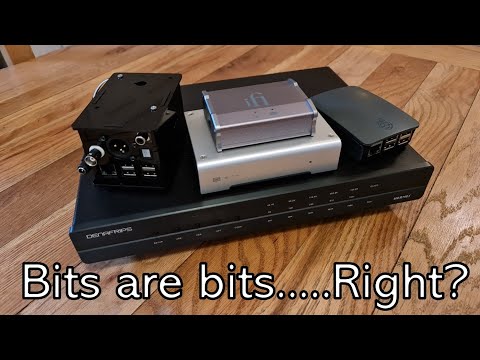