“Too many failures. Stopping playback.” Every few tracks on Grimm MU1

No network. Local onboard 2GB SSD

Playing local music no problem for three weeks. Then suddenly this meaningless error message. Happens once a day to start with. Now every two or three tracks. Every time I have to reboot. 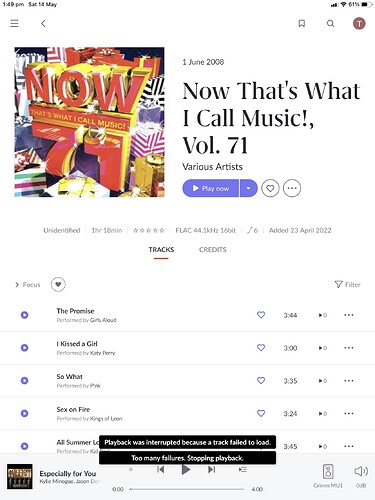 What do you mean by no network? You don’t think it’s a network issue or the server isn’t connected?

I’ve been having multiple similar problems since the last update.

I think he means he doesn’t use network to connect to music (NAS or Streaming services like Qobuz/Tidal). All his music is local (SSD inside the MU1).

I ask as even local roon does need a network connection anyway for metadata, licensing. So missing details off doesnt help for diagnosis.
It sounds like roon experiencing a network error

If core and output is running on same device, and music is stored locally on this device - no network is included in the signal path during playback.

I would reach out to Grimm Audio, since issue is inside this device. Only place the network is used is for the remote - playback does not stop if this gets disconnected from network.

It’s a Linux computer, so could be standard computer problems. As recommended above, I’d reach out to Grimm or your dealer for help. They package Roon Core with the machine, so it’s all in their ballpark, I’d think.

As Patrick and Tor_Gunnar_Berland mentioned, there is a (Ethernet) network connection but it’s only for fetching meta data, server updates etc. No NAS involved.

Yes indeed. Grimm Audio package Roon Core with the MU1.
(Only had the thing for three weeks. No issues at all, playing for a few hours each day. Until Wednesday when I saw this error for this first time. Saturday was the worst, seeing this error only after playing 2 - 3 tracks.)

Have you rebooted everything from the network outward?

That’s a good point. Thanks Ged. Haven’t re-booted the network router in ages.