Roon Team - can you explain how Roon is counting and linking tracks? I really like the theory behind the feature (being able to click on the little counter to the right of a track and jump to a new window with other instances of the same track and from there to the actual tracks). Unfortunately though I find the feature very erratic.

I have a large library of one band’s live catalog (over 200 concerts). The albums I’m looking at for this query are all released by the artist and Roon has resolved every album. But some albums don’t show a single track occurring anywhere else in my library. Other albums show counts for some tracks and no counts for others, but I’m 120% positive other instances of the song are within the library. Songs that do have counts are incomplete. And on even some occasions I see counts of One (what does that mean, a pointer back to itself?).

Can you explain what Roon is looking at to make these song links. Is it the file names, the song name embedded in the meta data? Is it somehow coming from the database you’re pulling your online meta data from? If I understood how Roon is arriving at this number then maybe I can fix my library accordingly.

I have questions on this as well. As there are songs I know I have multiple versions of, original album, best of album, live album, where a lot of the times the other versions aren’t listed, some are listed as 1 and then some are correct. I haven’t really pinned down the logic yet.

From my observation, in part the info about compositions comes from the global Roon database, and it seems to be based on composer credits and song titles. Sometimes, when a track is not linked to a composition (no entry “Go To Composition” in the menu next to the track), it’s because Roon has no info and adding composer info to the track credits manually links it up with the/a composition so that the counter appears if needed.

I have a few cases where composer info is provided by Roon but the track is not linked to any composition. I have the feeling that it’s sometimes due to duplicated artist entries. For example, I have some live performances of “Twist and Shout” by Bruce Springsteen where Roon has composer data, but there is no composition linked. I now found out by dropping another version of “Twist And Shout” by The Beatles into Roon that is indeed linked to a composition, one writer is “Bert Russell” whereas the credits for the Springsteen performance lists “Bert Russell Berns”. Unfortunately, neither by merging the two artist entries nor by manually editing the track credits, I could get Roon to assign the proper composition to the Springsteen track.

Other cases are really strange. To stick with Springsteen, I’ve got several performances of “Dream Baby Dream”. Yet only one of them is linked to a composition (the one from “High Hopes”). For the others, the composer info is there and even clicking on the composers takes me to the composer pages where under “composition”, “Dream Baby Dream” is listed, but only linked to “High Hopes”. So it’s definitely not duplicate entries here.

This is much improved in 1.3 put still not catching everything it should. I have many similar examples.

@joel explained how this worked for earlier versions and I think part of it was that it needed the exact same composer credits from the metadata. Perhaps he can update us on how it works now.

@rugby this might be better off in the metadata section

I took a look at the credits as you suggest. I don’t think my findings are conclusive but here is what I see after poking around on some of my tracks.

So possibly something with the Composers as I do see some mismatches when the composer is slightly different (i.e. comma separated as opposed to backslash), but some composers are identical and still not being counted.

I’ve also noticed that whenever the composer is listed as “Traditional” (lots of old Blues and Folk songs) Roon won’t match these up.

Joel thanks for the details. If you don’t mind some comments.

I do see instances where the difference of a comma verses backslash causes the tracks to be not linked. Can anything be done to be more flexible with separators?

I’m also seeing if the composer is listed with verses just these don’t get joined either. Maybe a future version could be a little more tolerant to differences??

BTW just found a track with composer set to “Traditional arranged by…” and is linked to similar composer.

Isn’t supporting a composer that reads "Traditional arranged by " the equivalent of a composer field being set to just “Traditional” and the performing artist field being which always is set?

Hi @support
Could you please explain when exactly composition is created while I add composer credit? I have lot of identified tracks without composer credits and trying to add composer manually. However sometimes I get composition created after adding composer and sometimes do not. This behaviour is unpredictable. For example I added composer Steve Harris to bonus track “No prayer for the Dying (live)” on Iron Maiden “Fear of the Dark” double cd. However no composition is created after that at all and I cannot merge this performance with original non live track into single composition. 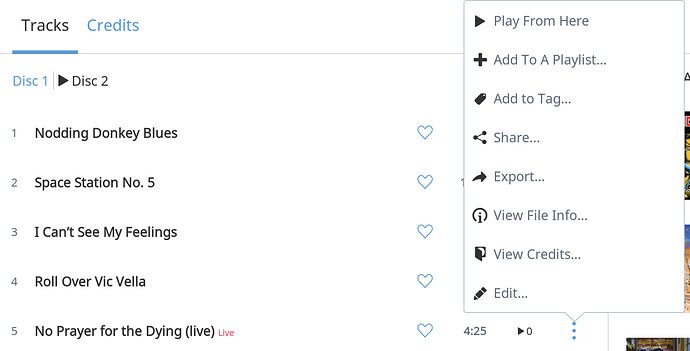 As you see there is no “Go To Composition” entry in popup menu. Is this a bug or I miss something? I use core build 209

@vladimirkl – there’s some information in @joel’s post above how Compositions work in Roon.

Let us know if you have any other questions.Thanks!

Hi @mike, @joel’s post certainly doesn’t explain my issue. I understand how automatic merging of compositions works and have no problem with it. The issue that I want to create missing composition entry manually and it doesn’t work it this particular case. I have a following flow of events:

I already did what I described for several other tracks on other albums and it worked perfectly. So I don’t understand why it doesn’t work here. Please let me know If I clear about issue.

@vladimirkl If you go into Menu -> Compositions and focus on Composer = “Steve Harris” and Composition = “Prayer”, what do you see?

@joel, @mike It seems that I found the cause of this issue - Roon metadata prevents creation of composition. If I make album unidentified then I can freely add composer and create new composition. If I identify again album composition disappears and I cannot create it anymore. I think this is a bug and should be fixed ASAP - because it makes any efforts to add missing composer credits absolutely pointless. In any case ability to overwrite credits is advertised as one of the key features of 1.3 and I very disappointed that it doesn’t work properly.

I added Steve Harris composer credit to live track to create new composition entry and then merge with original composition. But this doesn’t work - no composition is created at all.

How did you add the composer credit? In Roon or file tags?

Are you seeing the credit you added in the Track Credits popup?

@mike I add composer credit in Roon and it is visible in Track Credits - you can see it in screenshots above.

@mike @joel Can you confirm that you understand issue and it can be fixed in future builds?

Hey @vladimirkl – we’ve been discussing this, and I think this may be a combination of functionality that’s not working as expected, and some functionality that doesn’t yet exist in Roon (editing of Compositions).

We’re working on both tracks – if there’s a bug here that will probably fixed sooner, but we do intend to address the issue you’re describing.

I’ll follow up when I have more firm timelines @vladimirkl.