The track listings on this 15 CD box set of Bach’s organ works are wrong. Would it be possible to get them corrected? I have checked the files on my SSD and those are correct but they appear all mis-labeled in Roon.

@Hasan_Latif, I own this set as well and as far as I can tell, this seems to be recognized correctly by Roon.

Hi:
Interesting that you don’t have this problem. Perhaps there is something wrong with how I have loaded the discs up into Roon. Can’t figure what I may have done wrong though.

Here are three snapshots tfor three different discs (discs 12, 4, & 3) from the set of 15 that show my problem. The first few tracks listed by Roon for each of these three discs are wrong and the errors continues down the list of the remaining tracks on each CD.

So on Disc 12 it should start with the St Anne Prelude and fugue which actually appears to be the third track but is the second that would play in sequence if you start playback at the beginning of the disc. 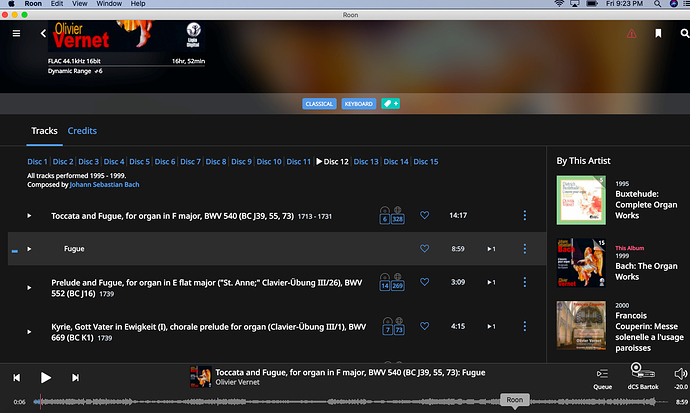 Likewise here on Disc 4, it is the same story. The disc should start with the Fugue on the Magnficat, but there are two tracks that appear before, of which only the second plays. 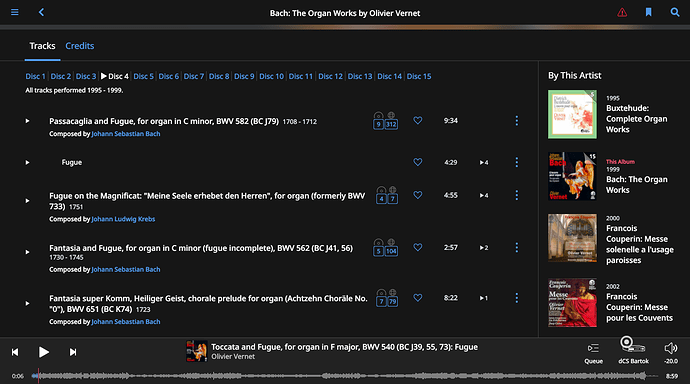 And here for disc 3 the actual first track is again the the third listed by Roon. 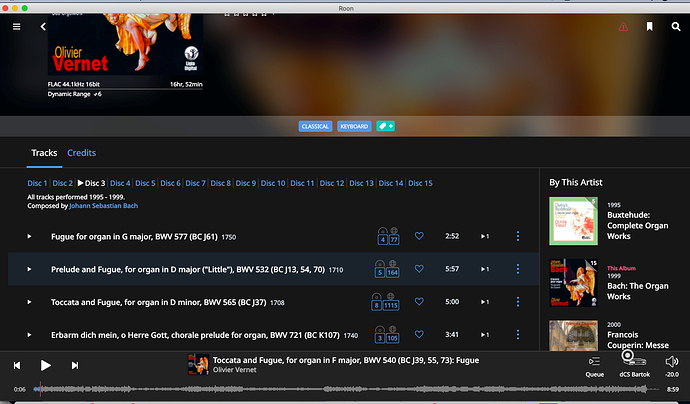 When you play these discs Roon plays the correct music (as per the actual CD track listing) but misidentifies it as shown in the snapshots. Hope I am explaining this clearly.

As I recall there are more errors on other discs too. These are the ones I have tested recently. I believe a year or so ago I re-burned these discs onto my drive when I first saw some track listing problems (I think the same or similar problems to the ones I have now actually). Then I gave up and left it alone for a while and didn’t actually listen to the music. Until now again.

I would be grateful if you could tell me what you see for these discs. Maybe that will give me a clue to help figure whether the error is mine in the way I have burned these CDs.

Looking at the album photo, yours seems to be a different compilation / recompilation. I own the original release (from 2008), where everything is fine. Also , my release has actually 19 CD’s while yours has 15.

So, there appears to be a problem with this specific re-issue of the box-set. Unfortunately I cant help you any further with this one. Its one for @dylan to have a look at.

If everything else fails, you could set the WORK and PART tags in your files and have Roon point to these instead of using Roon’s composition groupings. Its a bit cumbersome but maybe the only way around this.

Thanks very much for looking. I think my set is from the early 2000s or late 1990s. Perhaps @dylan will be able to help.

I now believe it is a problem with a number of meta-data providers for this album. I have now re-ripped this album in ALAC using ITunes (which is what I had done a long time ag). ITunes appears to be the only software with the correct metadata. I then converted the ALAC files to FLAC.

Roon’s metadata provider (AllMusic?) has this album wrong as well as all the other meta-data providers in DBPoweramp! In fact they all have the same errors on CD 12 anyway. I believe that Roon’s meta data provider is Allmusic? If so, the linked page below shows their data and I can confirm that it is wrong in ways described earlier in this thread.

What do Roon users find to be the best and most accurate way of ripping CDs to FLAC?