I have issues with The Smashing Pumpkins’ track Bullet with Butterfly Wings that is available on Tidal when using its own app but unavailable through Roon? 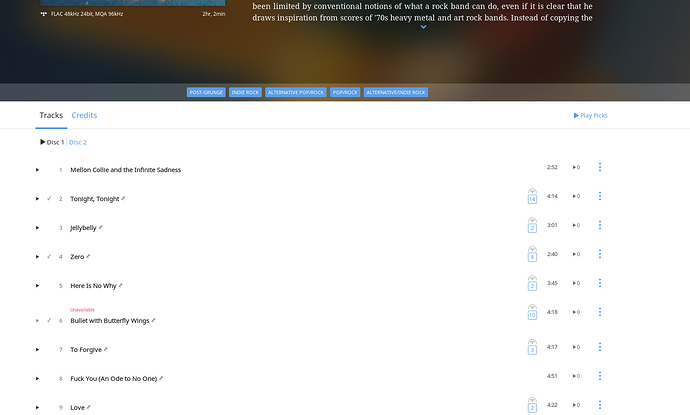 if its a recent release it might take a few days or more to show up in Roon’s Tidal listings.

It’s not a recent release. Quite an “old” album and been on Tidal for some time.

Maybe a local thing? I’m playing it right now from Tidal in the states.

@support maybe the roon lads can shed some light.

I was having issues playing any Tidal content this morning (and for the last few days for that matter). I logged out and logged back in and all is now working. This has happened before as I recall. Not sure why but it is what it is I guess.

Thanks for reaching out, @Tuomo_Henriksson!

Can you verify which album in TIDAL you’re experiencing this with?

Are all of the other tracks on the album playing without issue?

The album is Mellon Collie And The Infinite Sadness by The Smashing Pumpkins. All of the other tracks on this album play without any issues.

Can you do a search for this album in Roon and see if you’re able to play it there?

Also not the first time that I’ve seen Tidal’s offerings vary by region.

Glad you found a way to get the track to play.

Here in the US it’s identified as a “Deluxe Edition” and has five discs with a total of ninety two tracks.