Tracks in tidal playlists show up as partial albums in Roon

I have approximately 50 albums in my Tidal but I also have a bunch of playlists that have hundreds of tracks in them and these tracks are showing up in Roon as albums so I actually see 575 albums in Roon (when I click on the album I see relevant tracks and then a link to “view complete album on Tidal”).

Is this expected behaviour?

Thanks for asking this question! The short of it would be yes, but please, allow me to share a bit more

Unless it is a playlist you have created in TIDAL, the only way to have other playlists from TIDAL show up in Roon is to favorite them

By the nature of how favorites work between TIDAL and Roon, anything (tracks or albums) you favorite in TIDAL will automatically be added to your Roon Library. This syncing regularly.

To apply the above to your example, it is expected that tracks you have favorited in TIDAL (by favoriting the playlist they were in) will show up in your Roon library, as part of the album they belong to

That makes sense, but unfortunately breaks Roon for my intended usage (which had been to combine my album collection with my Tidal playlists and albums).

I have hundreds of songs that I like in numerous playlists, but when I choose to browse albums I am only interested in listening to complete albums that I like. In my testing I now have 50 albums I want to listen to, but can’t find them because there are 500 albums cluttering the interface that are not albums I even like (they just happen to have one track I like).

I’m still considering Roon for my local album collection but connecting it to Tidal (and presumably Qobuz) breaks my use-case. Similarly I’ve really liked Roon Radio but I can’t add these to a playlist without adding the track (and subsequently the album) to my library.

The only in-between I can think of is to heart my “real” albums, but this would be pretty fiddly to maintain.

Thanks for being so quick to reply — actually, I have to go back on what I said: apologies. Our technical team noticed this thread and we had a conversation about it. Here’s how things actually stand:

When a playlist is favorited in the TIDAL web app, contents of this playlist are not added to your library automatically as favorites.

Would you please let us know how many favorite tracks you have?

Thanks for the response. I’m away at the moment and can’t check until the weekend, but the short version is that I have >500 albums showing up that are actually just songs from Tidal playlists that I’ve favourites (the playlist, not the album).

As far as I know, partial albums appear in Roon only in cases where one has favorited single tracks of an album in tidal/qobuz instead of the album itself. Favorating a complete playlist in tidal/qobuz doesn’t do this.

Furthermore, I don’t understand why you cannot add songs from roon radio to roon playlists without adding them to your library first. That works without any issues for me. That said, if you decide to add the corresponding album later to your library, the tracks in your roon playlists won’t automatically link to the album that now has been added to your library (even though it’s the same freaking album version on tidal/qobuz). For me, that’s the really annoying part…

I’ll take a moment to reply to the question below, while we resume troubleshooting for the initial issue:

why you cannot add songs from roon radio to roon playlists without adding them to your library first.

We discuss this in the article below. Even if you’re experiencing this behavior as impractical, I hope the explanation below will help:

Furthermore, I don’t understand why you cannot add songs from roon radio to roon playlists without adding them to your library first.

That part was more of a question for @James_Fitzell regarding his post:

Similarly I’ve really liked Roon Radio but I can’t add these to a playlist without adding the track (and subsequently the album) to my library.

I don’t understand why this isn’t working for @James_Fitzell because, despite the downsides and troubles you have by not adding an album to your library, that works for me. I can add as many tracks as I want to playlists, even though none of these tracks are in my library. In fact, the same happens if you save a Roon copy of a playlist that was generated in/by Tidal/Qobuz.

Hi @beka I’m not quite sure how to confirm the cause.

I have no favourited tracks in Roon (nor favourited albums). In tidal I have a number of albums and many more tracks in playlists. As far as I can tell these tracks are showing up in my Roon library as albums. 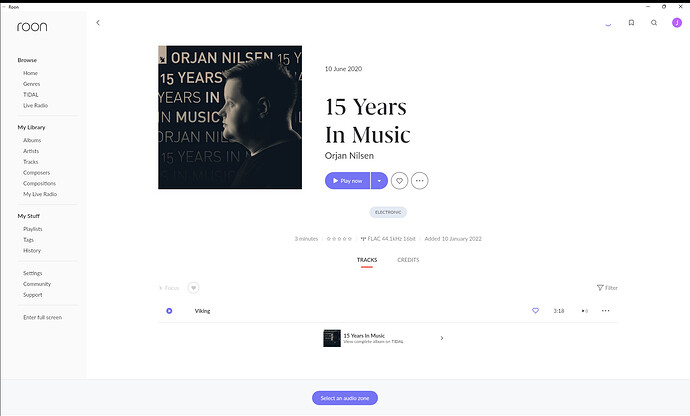 Thanks for following up, @James_Fitzell. I appreciate the details and screenshots.

I was wondering if you could try this, to see if things improve:

@beka I’ve worked it out! (which is both good and bad).

I tried your suggestion with no change (and if I’d thought about it I should have known that wouldn’t have helped as I’ve rebuilt my ROCK several times during testing).

I then chose a song I didn’t like and:

So, the issue is that I have heaps of liked tracks (from completely random albums) in Tidal (anytime I hear a track I like I add it). I frequently play my liked tracks on shuffle so this isn’t really a behaviour that makes sense to change (I realise I can add each track to a “Liked playlist” but the Tidal UI isn’t designed to make this as easy or quick). I have zero interest in showing up in my Albums (and in Tidal they don’t, unless I like the Album rather than the track) and switching everything to Roon and deleting all my Tidal likes won’t work since I use Tidal anytime I’m not at home (i.e. 30+hrs per week while at work).

So, unless this is a bug that’s not meant to behave that way, it seems that Roon doesn’t work well for my use-case unless I don’t connect any streaming services and keep my local library completely separate to my streaming library (which defeats much of the purpose of using Roon to cater for everything). For reference, I’m belatedly coming from Google Play Music where I’d uploaded the albums I cared about and had these inter-mingled with my streaming tracks. Google completely broke everything with YouTube Music and yet despite detesting it I keep finding unrelated issues in everything else I’ve tested that mean I haven’t found a new home that ticks every box (obviously Roon/Tidal is better quality but other things like this issue aren’t working right).

Roon is the only thing I’ve used since Google Play Music that reliably does gapless streaming to Chromecasts (whether my own albums or streaming Tidal) but it seems that connecting Tidal to Roon causes this new “problem”.

With Roon there are many ways to get things done. Your goal is to not see the albums showing due to single tracks.

Instead of trying to prevent it, hide the one off albums. That way they are not seen by you in the albums section. Select the albums you want to hide, edit, and Hide. Also, verify Show Hidden is set to No/off in settings.

To save time, set a focus for albums with a single track, select all, edit, hide.

Thanks @Rugby while it’s an extra step that seems like a great workaround.

Additionally, I think part of my issue is that these were migrated from Google Play Music… in GPM you could select your liked tracks like a playlist and interact with it from there, but I can’t actually find a useful way interact with my liked tracks in Tidal anyway so the point of likes is negated. I’m hoping that a mixture of hiding some albums and/or stopping liking tracks (and instead adding them to a playlist) will solve my problem.

On a sidenote, having messed around with this further I’m not actually sure what the point of liking a track in Tidal is

(I’m trying to work out how to move them to a playlist and then unlike them all, but Tidal doesn’t seem to allow this function either… in fact other than just a very long list of tracks your liked tracks don’t even seem to have a function that’s useful on the PC