I’ve noticed that Roon has been very inconsistent when showing which tracks are part of a playlist when looking at the track list in an album. For example, the first three songs of The Sunday’s 'Reading, Writing, And Arithmetic" are in a Roon playlist called ‘120 Minutes’, but the individual tracks when looking at the album itself aren’t showing up as in the ‘120 Minutes’ playlist (see attached).

It seemed that after first moving to Roon it was properly showing some of this data, although even then it wasn’t 100% (in this example the first song may have been flagged as being in '120 Minutes` but the others wouldn’t) but now I’m not seeing it at all in any of my Album views. No tracks on any of my albums include notes about which playlists the track is part of. I can’t find anything in the settings to turn that on or off so I’m not sure if it’s a bug or just something I’m missing. 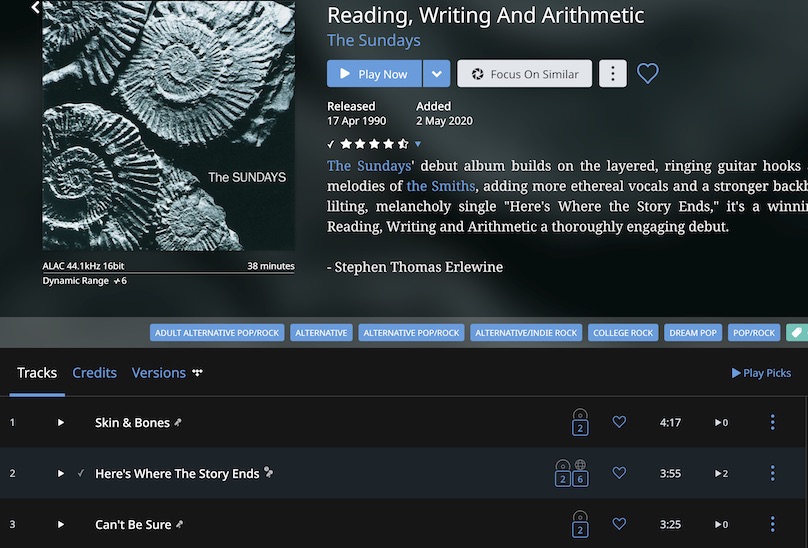 Do other playlists also have this issue or is it only occurring on the [Roon] 120 Minutes playlist?
I wonder if the brackets in the playlist name could be part of this issue.

I did test renaming the playlist to “Roon - 120 Minutes”, then rescanned the Sunday’s album and didn’t see any change.

Thanks for checking the bracket aspect. According to your screenshot, it appears that you might have two versions of these songs in your library (clicking on the “CD icon” with a 2 underneath it should reveal the two versions. Is the other version of the track by any chance associated with the playlist?

Good suggestion but the other formal is Tidal, so no luck. If I view the file info on the file from the playlist it’s pointing to the correct local file and album.

Best I can tell I’ve narrowed it down to not showing any tracks in playlists from the album view that were part of my initial import, but it did show those immediately after the initial import. I was really impressed with that feature while trialing Roon. And new album imports are showing up correctly, just not any of the original imported files anymore.

If I view the file info on the file from the playlist it’s pointing to the correct local file and album.

Can you please share a screenshot of your file info?

And new album imports are showing up correctly, just not any of the original imported files anymore.

Are these being added to a new playlist or an existing one which had the issue?

Screenshots of file info from the Album view and Playlist view: 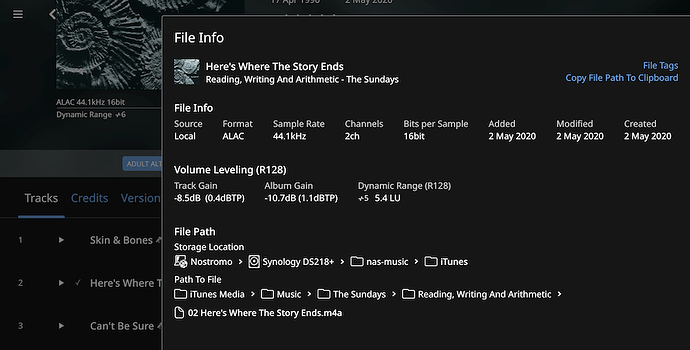 These are all being added to existing playlists. When I initially imported my iTunes library I imported all tracks and playlists and everything was good. Now I’m adding new tracks to the same imported playlists and the new adds are showing up but the songs that were part of the initial import no longer are showing up.

Thanks for those screenshots. Can I please ask that you upload a copy of your Roon logs by using these instructions to access them and post the logs to Dropbox / Google Drive? I would like to get your screenshots + logs over to QA to see if they can take a look at them.

Thanks again for sending those logs over and for your patience while it made it’s way through the queue.

Our QA team has been attempting to reproduce your findings in the QA lab, but we have not been able to do so successfully.

Would it be possible for you to record a short video of you performing the addition to your playlist, show the issue and then share it with me?

If you try to manually add a few tracks from a random streaming album to the playlist (without having the album added to your library), does that work as expected?