Hi, my problem is that recently Roon is not importing songs/folders as I add them to the watched folder. I have this screen shot: 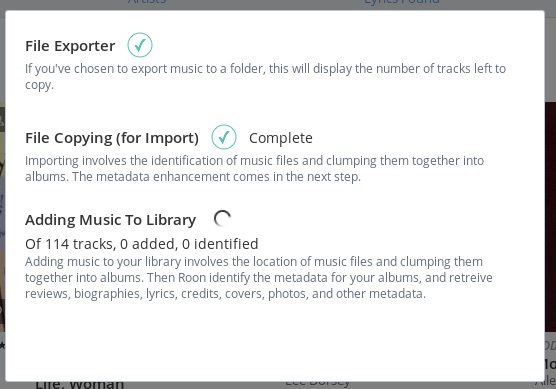 If I shut Roon down and reopen it, sometimes a new album or two is added, but it then remains stuck ‘adding music to library’ and the wheel keeps turning…

I am running on a new MacBook Pro (top spec), Yosemite, my watched folder is on an external hard drive. Over 100K songs, all going fine up until now.
Watched folder disabled and re-enabled to no effect. Disk permissions verified etc all checks OK.

Folders/albums that are not added play fine on other media players and do not seem faulty/corrupted.

Hi @BobBDazzla – I’m going to PM you so we can grab some logs and get this resolved.

Sorry for the trouble. Stand by!

Hello,
Today I discovered that I have this same problem. It is also today that I linked to a Tidal account. Is this a coincidence?
Arie

A number of users are reporting a similar problem. Are you able to import ok if you sign out of Tidal ?

As soon as I log out from Tidal, the syncing stops. Which, in my case is logical, because I had added albums from Tidal.
Logging in again, restarts the syncing.

I’m having a similar problem too. Today I added a Tidal album to the library (the ‘album’ has only 1 song, a single). “Adding Music to Library” is stuck on “Of 1 tracks, 1 added, 0 identified”.
I tried restarting Roon, still stuck.

I can reproduce this, which means it will probably get solved pretty quickly by the Roon devs subject to any holiday delays. I’ll get a ticket started in the internal system and when the devs are back on deck we can expect to see this bug firmly squashed.

Experiencing the same here. If you are not signed in to Tidal - any new albums added to local files, don´t get added. But even still, I´m having odd issues getting albums added to the library. Some are showing up, others are not.

I’ve added a bunch of albums to a watched folder. I ripped them all using XLD with the CDs identified. My Roon is now spinning on Adding Music To Library (for a couple of hours now) with the submessage Of 173 tracks, 173 added, 0 identified. How do I clear this issue?

I responded to this issue in another thread.

I tried adding an album and have the same issue. I believe there must be an issue with the Roon servers.

We’ll have to wait for the Roon guys to check the forum. There may be a delay because of the US Thanksgiving holiday.

Me too. Have added a number of ripped albums today, and removed a number of now duplicate ‘Tidal Favorites’ (from within Tidal). Albums are in, no notes from Roon, and the little circle is spinning with ‘0 identified’.

There are a cluster of reports of a similar issue. Tidal appears to be a common feature. I’d suggest signing out of Tidal and seeing if that makes a difference. We will leave a notification for @mike and @vova to investigate further.

I’m getting the same problem - stuck on Adding Music to Library after adding three downloaded albums. I’ve tried signing out of Tidal but it doesn’t make any difference.

I’m on the album Camiile from Ilo Veyoy and tapping from an iPad on “add to library” has no apparent effect.

I’ve merged the various threads reporting this issue into this thread so we can all get updates in the one place. Thats why the order of posts above and below may look a little odd.

I can reproduce the issue with Tidal albums and have opened a ticket in the internal bug reporting system (#13325). As soon as any holiday delays are over the Roon devs will be all over it. I’ll leave notifications here for @mike, @vova and @jeremiah.

I think @evanw has found that local albums are not getting added either. Can anyone confirm if that is happening for them also ?

I installed Roon a couple of hours ago. Version 1.1 build 70.

I’m running Windows 10 on a desktop with an i5 processor and 16 gig memory.

I apologize for the dual post, but I saw that support questions should be posted here after posting in the software category.

I tried adding an album and have the same issue. I believe there must be an issue with the Roon servers.

We’ll have to wait for the Roon guys to check the forum. There may be a delay because of the US Thanksgiving holiday.

Please be patient, I’ll be worth it.

No problems about the dual post, I’ve autoclosed the other thread and we’ll use this one to investigate.

As Greg says there may be some delay while Support devs are away on the holiday weekend. There have been a couple of other reports of similar issues. Have you signed into a Tidal subscription in Roon at this stage ? I’d suggest signing out of Tidal and seeing if that makes a difference.

We’ll leave a notification for @mike and @vova to investigate further.

I am also having this issue. As a new user, I was pulling my hair out trying to figure out what was wrong with my setup. Hopefully this is an easy issue to resolve on the “cloud” side.

Looking forward to any updates…