Let me show you one album, d’Indy Symphonic Works, Vol. 1. It is recognized by Roon:

and here are the relevant tags (from Yate app) from the raw files: 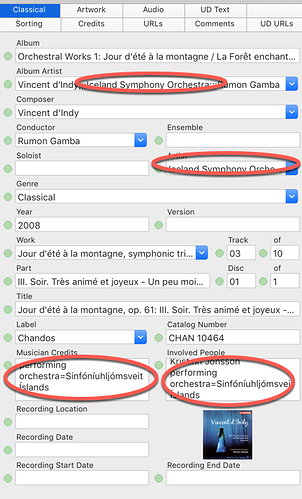 Here are my objections:

To summarize: 1) treat “performing orchestra” tags as “Orchestra” tags on import; and 2) do not create Primary Artist tags for either Orchestra or Conductor.

Briefly (and I don’t have the time to get into an involved discussion here):

(Presumably Performing is needed to differentiate from a Standing Around Doing Nothing Orchestra .)

Actually, I think it’s used at musicbrainz to distinguish between

It makes sense how it’s done at musicbrainz but Roon doesn’t make use of Release relationships (yet), I believe - at least not in a way that would or could match the musicbrainz logic. (Note: I don’t suggest to discuss it.

Seems like we agree on the performing orchestra tag:

And, just so I understand, Roon purposefully intends to display Conductor and Orchestra twice under Credits: once under their natural names, and once under Primary Artists. Yes??

In other words, the above display is functioning as intended, yes?

The above display is functioning correctly, but I don’t know what you mean by “natural names”. Personally, I quite like viewing the credits Sorted by Name. For example: 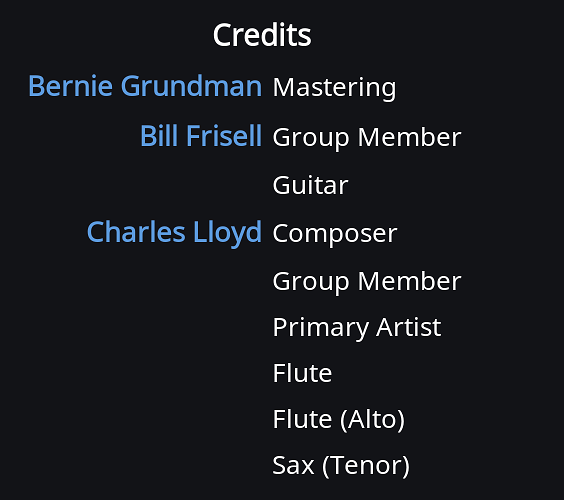 Actually, I think it’s used at musicbrainz to distinguish between

Thanks for that info. The [rhetorical] question I have is: how many MusicBrainz contributors know the difference, or even that there is a difference?

how many MusicBrainz contributors know the difference, or even that there is a difference?

From the little experience I have with adding stuff at musicbrainz it seems like there’s no need to know when entering data because musicbrainz automatically adds “performing” when an orchestra gets added as a recording relationship of a track.

One can remove a Primary Artist tag via a Roon track edit, and nothing changes except on the Credit List where the redundant label of Primary Artist is removed. The “Performed By” XYZ Orchestra and “Conducted By” lines remain as was above the tracks listing, and the second line (beneath the album title) is unchanged.

As for why “performing” is added, I have no idea. You’d have to ask MusicBrainz. But it is routinely added.

Now, I, like you, “don’t have time to get into an involved discussion here”, and “the subject is not up for negotiation.”

Thanks for your input. Helpful as always.

One can remove a Primary Artist tag via a Roon track edit, and nothing changes except on the Credit List where the redundant label of Primary Artist is removed.

I’m not sure if it’s that simple. Merging Primary Artist and Conductor and/or Orchestra might be a presentational option on the credits tab, but maybe not a functional one. Admittedly I didn’t fully grasp the implications (and am not sure if I need to) but it seems like there’s more to this - even so it looks redundant in the credits tab. How can you be sure that all what comes with the (coded) privilege of being a Primary Artist will apply to Conductor and Orchestra too? Not everything might be obvious at first …

As for why “performing” is added, I have no idea.

See my comment further above for my idea about it.

Merging Primary Artist and Conductor and/or Orchestra might be a presentational option on the credits tab, but maybe not a functional one.

You are quite right, @ndrscr, things rarely as simple as they seem particularly in RoonLand. But as @tripleCrotchet added, I too have deleted these apparently dead links without obvious side effects. Too bad we have to guess about this stuff.

It gets me back to the problem of working with black boxes. Some mystery can be delightful; too much mystery is irksome.

I get these duplicates a lot and my experience is the primary artist link is usually “dead” in the sense that either the link doesn’t work at all or it just goes to a “text string” with no bio or artist art.

This usually indicates that an artist from file tags couldn’t get merged automatically with the artist Roon has on records for the track. The reason: who knows … at times, Roon may still have two entries for one artist in its data set - even so I understood that recent changes at the way multiple metadata sources are merged in the cloud will clear up this; at other times there may be a data point we just don’t see which leads Roon to decide not to merge an artist. Speculation, speculation …

This is not happening to me occasionally. With orchestral music It happens 100% of the time. I have seen the occasional post concerning duplicates but I am really surprised it is not raised more often as an issue.

This is a totally random example. Nothing special about it, happens to me all the time. 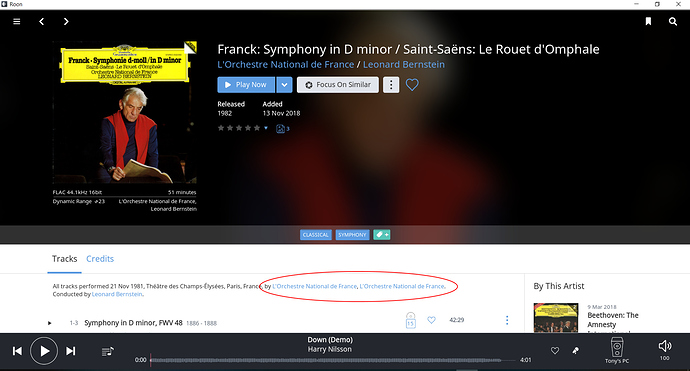 Normally what I do to remove the duplicate orchestra is I delete the primary artist: 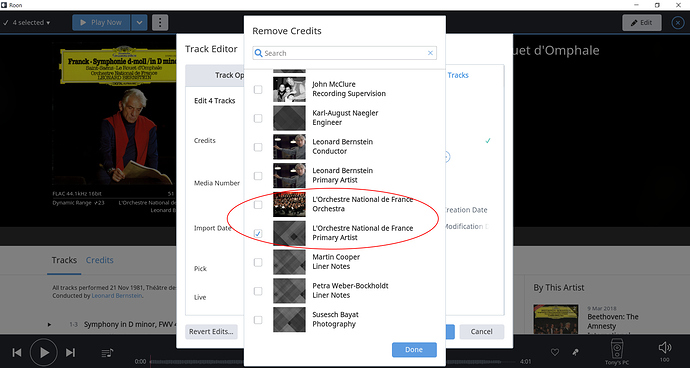 Then finally I get this: 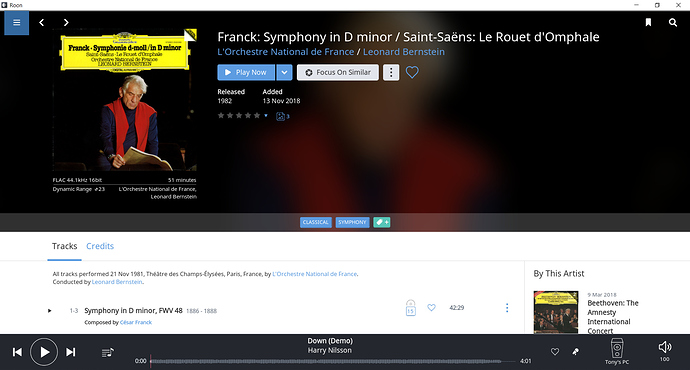 What Import settings do you use? “Merge Roon and File” on track level? And on album level?

Mostly I use roon. There are a couple of exceptions (artwork, composers, label, catalog and a few others).

One thing though is that with a largish library I cannot see any practical way in which I could change these settings now. If you do, then roon re-writes the entire library (not just future imports) and that has the effect of overwriting all sorts of edits I have made to make the display work with this particular combination of settings. I have tried doing that a few times but then everything is a much worse mess that would be a nightmare to re-edit so I end up reversing it. Now to all intents and purposes I seem to be stuck. 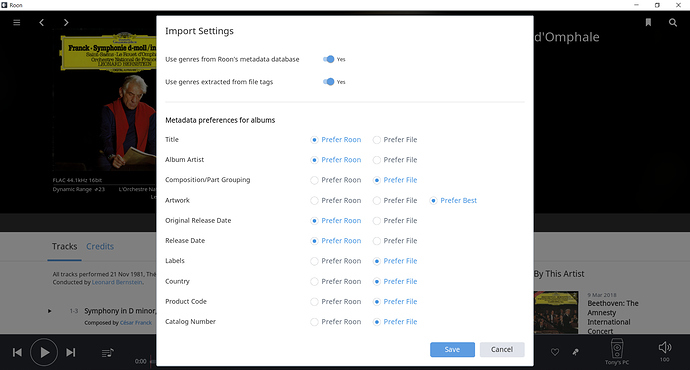 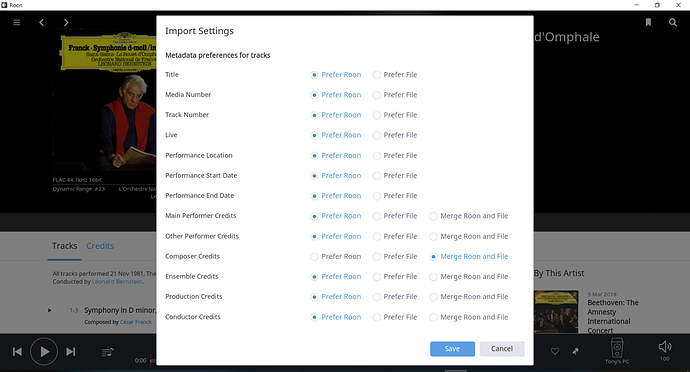 Hmm, so with “Prefer Roon” file tags are treated as additional entries for performers on track level. The to be expected behaviour, I’d say.

Since it’s kinda hard to predict what will change and what sticks when you alter an import setting I understand that you’re reluctant to try. Even so with a backup done right before the change a trial run seems possible. I’ve set “merge Roon and File” for all credits except production and seem to have less doubles.

I did try a back up and restore a while back but I just restored my settings. Maybe there is another way of doing this.

Seems like we agree on the performing orchestra tag:

And, just so I understand, Roon purposefully intends to display Conductor and Orchestra twice under Credits: once under their natural names, and once under Primary Artists. Yes??

In other words, the above display is functioning as intended, yes?

Sorry to revive an old discussion…I know that @joel said this was working as designed, but I want to pick this apart a little bit.

All of this repetition is not adding any value, just clutter. There is really no added value to displaying someone as a primary artist in credits if they already have a conductor, composer, or ensemble role in the same list.

Both are feasible, but have different tradeoffs. Fixing it in the source data lets the user interface remain “dumb” with respect to this–which makes the editing model a little bit more comprehensible since there is no hidden logic between what you edit + what you see…but that also means that with edits or bad file tags, you can still get some of these obvious repetitive situations.

I think I would be comfortable with either approach. I am slightly worried about the confusion that doing it in the display layer may cause for editors/groomers. Doing it in our source data is a bit more pure to our ideals about automatic metadata improvement/identification, and I think our source data is where most of this mess is coming from.

I think that doing an auto-grooming pass over the source data is the better play. But, that is me personally.

I tend to agree. We can also do more intrusive cleanup there. I would feel weird doing a “Performing Orchestra” -> “Orchestra” rewrite on someone’s manual edit, or file tags, but not weird at all about doing that to source data.